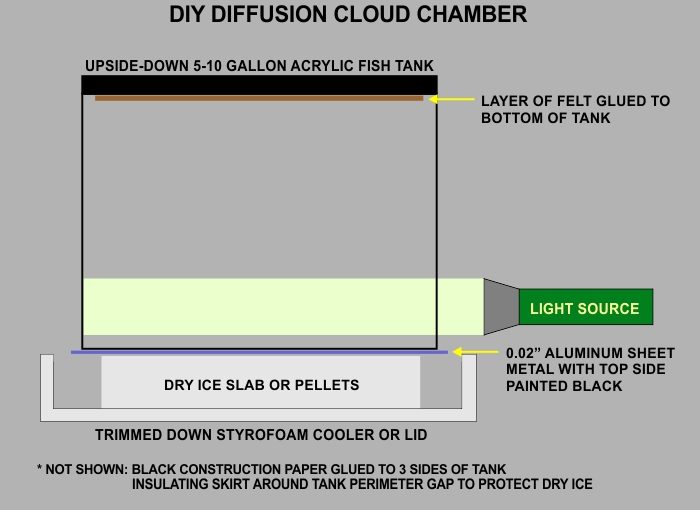 Looking for a great Science Fair project? You could build a cloud chamber. This video shows tracks made by radiation from a sample of uranium ore. It also shows tracks from outside sources. I’ll address the “muon decay” error later. I was a mentor for the student who built this cloud chamber. She used commonly available parts with a total cost of around $30 (not including the dry ice). The uranium ore is optional but greatly increases the number of tracks. You can legally purchase samples online for $10–20.

The tracks are actually contrails (condensation trails) that consist of tiny droplets of liquid isopropyl alcohol. The droplets form when a charged particle passes through the supersaturated alcohol vapor near the bottom of the tank. The clicks you hear are coming from a Geiger counter nearby. It’s detecting particles from sources other than the uranium, so the clicks only rarely sync with the tracks. Wherever you set up a cloud chamber you can expect some level of natural background radiation, and that includes radiation from space that penetrates to ground level.

You can find more detailed instructions online, but this diagram shows the basic components of a cloud chamber: 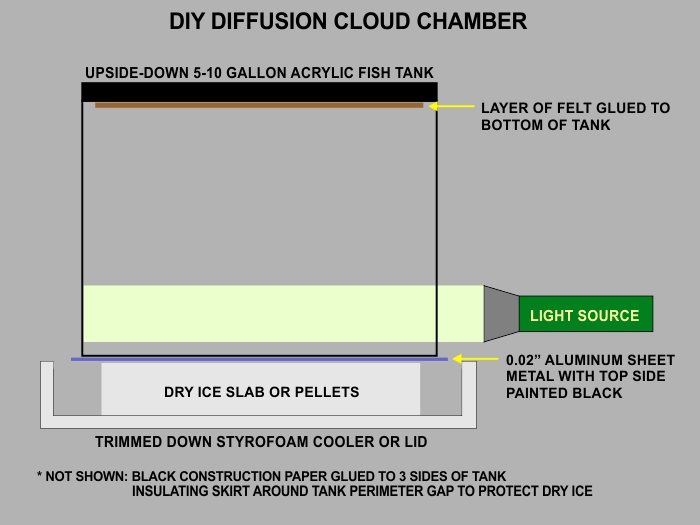 Saturated the felt with 99% isopropyl alcohol, then assemble the system. After 10-15 minutes a layer of supersaturated alcohol vapor will form near the bottom of the chamber. Lacking any uranium ore, you’ll still see tracks made by background radiation. How many and how often depends on your location.

CAUTION: Dry ice is cold enough to freeze your skin, so only handle it with gloves or non-metallic tongs. The vapor of isopropyl alcohol is toxic and flammable, so this experiment must be done in an open or well-ventilated area. Safety goggles and adult supervision are required throughout this experiment. You should also seek prior authorization for this project from Science Fair officials.

Now regarding that “muon decay” error at the end of the video … the three tracks sure looked like muon decay, but I later realized that was impossible. Two of the three particles emitted in muon decay are uncharged neutrinos, and only charged particles can make tracks.

So I watched that decay again in slow motion, advancing the video one frame at a time. Turns out the center track actually appears six frames (0.2 seconds) after the first two tracks. That’s too fast for the eye to see, but too slow for a decay product. So what exactly are we seeing there?

It was an incredible coincidence. The first two tracks were likely produced by the decay of radon which emits two alpha particles. Almost simultaneously a cosmic ray split the “V” of the alpha particles. The alignment was near perfect. If any reader can think of a better explanation please let me know.

I chose not to get into the nuclear physics decay equations, or why charged particles make tracks, or what cosmic rays are. My focus was on showing you how to make a winning Science Fair project, providing some important construction and safety tips, and explaining what you might see. Getting into the theories behind all this physics is left as an educational exercise for the student.