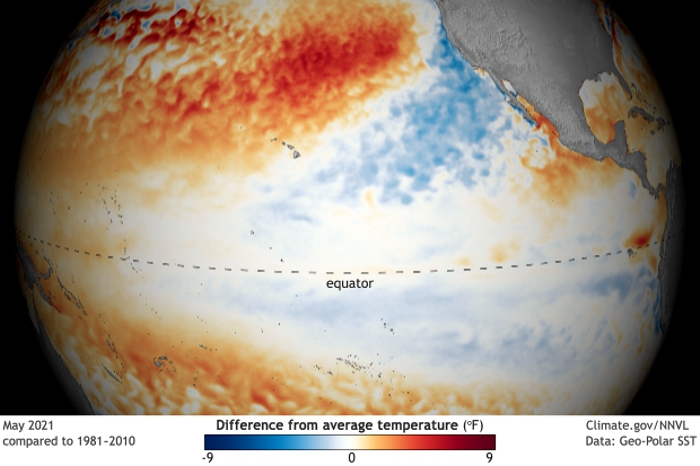 Question: This last heat wave was unbearable here in Oregon. The weather service keeps talking about the “heat dome” that caused it but never really explains what that is. Could you explain heat domes in simple terms that a non-scientist could understand? — JS, Portland, OR

Answer: That’s what I always try to do, JS. Heat domes are easy to understand if you know how high and low pressure systems work. Should you need to brush up on that, see my June 29, 2020 post: What Causes High and Low Pressure Systems.

Heat domes are high pressure systems on steroids. The same air flow happens in both cases (top graphic), but heat domes can create extreme temperatures when the upper atmosphere air is warmer than normal. On the west coast, this happens when waters in the eastern Pacific are warmer than normal. The NOAA graphic below shows a map of ocean temperatures in May 2021. This temperature distribution persisted well into June. You can see the waters west of the coast are 3–5°F above normal.

Here’s how that leads to a heat dome …

Air in contact with warm water absorbs heat, causing the air to expand and rise. This creates a low pressure system. Rising air is cooled as it expands in the lower pressures at altitude. That’s why a can of compressed air gets cold when you release its high pressure contents. The process is called adiabatic cooling.

The opposite happens when air is compressed. In a high pressure system, falling air is compressed and heated as it descends to lower altitudes. That’s why a bicycle pump gets hot when you inflate a tire — you’re compressing air. This process is called adiabatic heating.

All things being equal, a parcel of air that rises, then later falls, should return to its original temperature. But if heat is added to the air before it descends, it will arrive at ground level hotter than before it ascended. This is what happened to the west coast in June. Record-breaking temperatures were reached in many areas.

While at altitude the air can gain heat via two mechanisms, both of which coincided in the June heat dome. First, there’s direct heating by the Sun. This is, of course, seasonal and greatest in the summer. Nothing abnormal here. Direct heating happens all the time and occasionally causes heat domes on its own.

Second, air rising over a warm ocean contains lots of water vapor that will eventually form clouds at some altitude. When water vapor condenses into liquid droplets in clouds, it releases latent heat and warms the air. The warmer the ocean, the more water vapor contributing latent heat. In thermodynamic terms: Heat transfer from the ocean to the upper atmosphere increases.

So in a very real sense, the sweltering heat you experienced in Oregon came from the warm waters of the northeastern Pacific. This heat was ultimately deposited in, and concentrated by, the extreme high pressure system over your area. Most TV meteorologists understand this process, but can’t spare the air time to go into as much detail as I have here.

Climate scientists are pretty sure this heat dome was exacerbated by global warming. NOAA data shows the oceans have been warming for the last 40 years. Unfortunately, this means heat domes will likely become more severe and more frequent.

If you want to read NOAA’s explanation: https://oceanservice.noaa.gov/facts/heat-dome.html