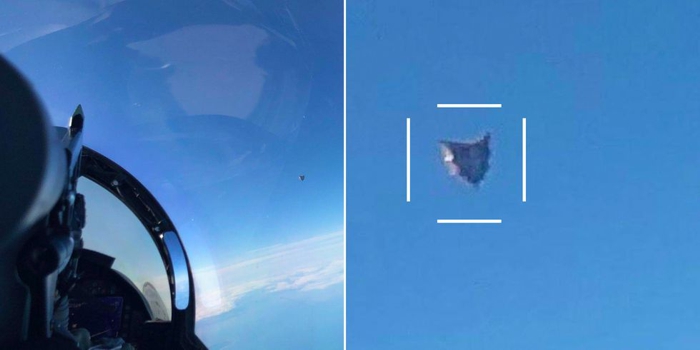 This image was purportedly captured with a phone camera on an F/A-18 Hornet “somewhere over the Atlantic in 2018.” It was widely distributed in the media and is one of the sharpest photos of a UAP ever published. I said “purportedly” because the photo was attributed to a leak and was not officially released.

When asked about the photo, Sue Gough of DOD Public Affairs Operations responded:

“I have nothing for you on that. I am not going to comment on whether something was or was not in a classified intelligence report. In general, regarding UAPs, to maintain operations security and to avoid disclosing information that may be useful to potential adversaries, DOD does not discuss publicly the details of reports, observations or examinations of reported incursions into our training ranges or designated airspace, including those incursions initially designated as UAP.”

If that’s some kind of “aircraft” in the leaked photo it certainly has an unconventional shape. Is this ET? In response to the hypothesis that UFOs were piloted by extraterrestrials, Carl Sagan famously declared “extraordinary claims require extraordinary evidence”. He called for all sides in the discussion to “keep an open mind — but not so open that your brains fall out.” Science always looks for the simplest hypothesis compatible with current theories. So if you asked me for an explanation of UAPs this would have to be my hypothesis:

The data is wrong. I’ve seen no numerical analysis of measurements that proved the speeds and accelerations claimed are correct. And visual observations are by definition subjective. Until the speeds are verified, the absence of sonic booms and contrails is scientifically irrelevant. As for the claims of “no visible means of propulsion”, I haven’t seen a clear enough photo (including the “leaked” image) to make that conclusion. Same for the claims of “no visible control surfaces”.

And regarding those “visual observations”, the claim is often made that military pilots are “trained observers” with a keen sense of direction, orientation, speed, size, and distance. I’ll grant they’re likely better than your average person, but when confronted with a UAP those perceptions would be more prone to error. For example: Is it a large object far away, or a small object close up? That judgment affects speed estimates.

There is a second plausible hypothesis. Last week I assumed the data was correct, and concluded no nation on this planet could possess that level of technology. I rejected the possibility of UAPs being any nation’s top secret military program. But if the data is wrong, then UAPs could be from a classified program in the US (or elsewhere). UAPs might be demonstrating and testing advanced signature management technology that includes spoofed signatures. If so, I expect UAPs to remain classified top secret.

Of course, that still leaves us with TJR’s original question from last week: What are UAPs and where are they from? If the data was analyzed by scientists (something that may or may not have been in the classified version of the Pentagon’s report), and it really is correct, and UAPs aren’t from any nation on this planet, then we just might have the “extraordinary evidence” science would require to hypothesize an extraterrestrial origin.

DISCLAIMER: There’s a reason I used the words “could be” in the title. I’d be lying if I claimed to know for certain. But since asked to provide my take, if I kept within the current laws of science, and if I wasn’t allowed to say “I don’t really know” (and I don’t), I could still proffer one hypothesis. What follows is scientifically guided speculation. And I’ll be playing devil’s advocate with myself …

In the early 1900s mathematician John von Neumann conceived of what are now called von Neumann probes — autonomous uncrewed spacecraft that serve as “scouts” for an advanced technological civilization. The probes would spread across the galaxy, exploring new worlds, seeking resources, and building copies of themselves from raw materials.

Because von Neumann probes travel in fleets and are self-replicating, damaged probes could be replaced — or the fleet could be expanded. Either way, once launched they would return a never-ending stream of scientific data to their creators. Even if the civilization that sent them on their journey no longer existed, autonomous probes would dutifully continue their original mission. UAPs could be von Neumann probes.

If the probes found an “unusual” planet like Earth they’d be programmed to stick around and investigate. Signs of intelligent life and technology would surely be of interest to their creators. But where are the probes “hiding” when they’re not buzzing our F-18s?

Probably not the far side of the Moon, as has been suggested since the 1950s. At least not now that we’ve been there. Mars has the same issues. But there’s a lot of asteroids available, some of which pass fairly close to Earth. And apparently the probes could also park underwater in the deep ocean if they wanted to.

Why would they need to hide? They might be following what the Star Trek canon calls the Prime Directive” — no interference with indigenous societies, only observation and data collection are allowed. The reasoning is that contact with a technologically advanced civilization would skew the developmental path of an indigenous civilization. But if that’s the case, then they’ve already violated the directive by showing themselves at all.

Then again, they could be hiding in plain sight. Advanced signature management at their level of technology could provide “cloaking shields”. We’re getting close to that ourselves using composite materials nano-engineering. Perhaps the probes showing themselves are imperfect duplicates with shielding that occasionally fails? Making copies of copies of copies eventually runs into the law of entropy.

If they aren’t malfunctioning, why would the probes be showing themselves now? Why would their AI make that decision? Perhaps there is no Prime Directive and they find our technology interesting enough to engage? Are they scanning our transmissions to learn how to communicate with us? Are they getting ready to make first contact? Learning an alien language is not as straightforward as science fiction portrays it. Even for advanced AI it could take years.

Von Neumann probes would an efficient way to explore the galaxy. They don’t need to travel faster than light and aren’t constrained by biological lifespans. Plus, they’d provide a steady stream of valuable information to their creators. That’s exactly what our space probes do for us — albeit over vastly smaller cosmic distances. So I doubt any alien probes would contain “little green men”, but they would have to be autonomous machines with advanced AI to behave the way they do.

One final point … apparently they are not malevolent, but then, we’ve never fired on a UAP (to my knowledge). Probably wouldn’t be a good idea. Might be better trying to communicate first. The AI just might respond.