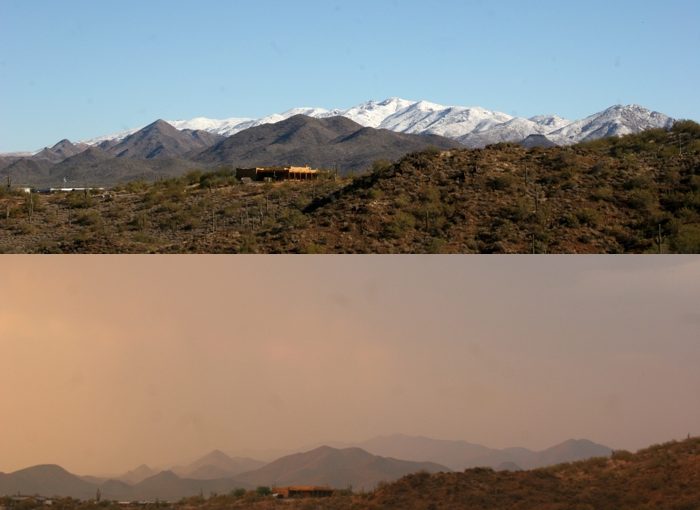 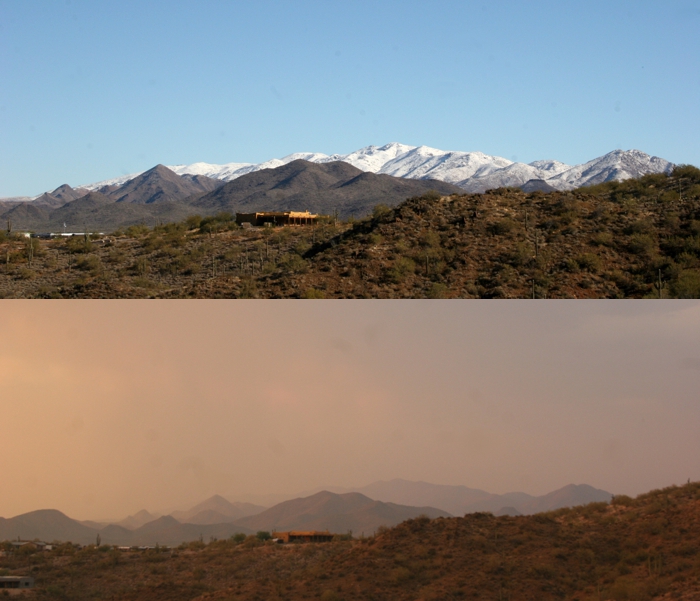 This composite photo shows the same view on two very different days. The top photo was taken in January after a refreshing winter rainfall. The mountains 3000 ft higher up got a nice dusting of snow. Precipitation washes most of the normally-present desert dust out of the air. This is about as clear as it gets.

The bottom photo was taken last month while several large wildfires were burning in Arizona. Perhaps surprisingly, the closest major (1000+ acre) wildfire was more than 50 miles away. Nonetheless, Phoenix NWS issued an air quality warning for the better part of a week. And of course, astronomy was out of the question — at night I could see only a few of the brightest stars.

Wildfire smoke rarely gets that bad around here. A lot depends on the fire’s proximity and wind direction. We’ve had a few fires in our neighborhood. But as development continues and road access for fire crews improves, wildfires tend to be more short-lived. The last one that started within sight of our home was extinguished in around 30 minutes. It’s the fires in remote, hard-to-access areas that often grow out of control.

Even at 50+ miles distant this wildfire’s smoke was pretty thick. When outside it made my eyes burn, my throat scratchy, and triggered frequent sneezing. It smelled like I was in a campsite. Inside the house wasn’t too bad, since we have an inside air exchanger with filtering.

The bad air got me wondering exactly what wildfire smoke contained, so I did a little research and ended up here:

The term “brown carbon” was new to me. Turns out that when organic material is combusted at very high temperatures you get the typical black carbon we normally call soot. And it’s pretty much pure carbon in the form of microscopic grains and flakes. But at the lower temperatures of wildfires more brown carbon is emitted. Those particles are partially-burned organic matter that range in size from 10 microns to visible floating embers. This bonfire is emitting mostly brown carbon: 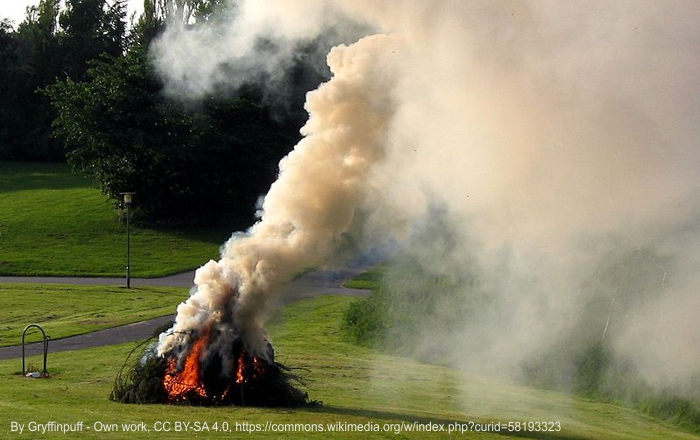 Under ideal conditions the largest floating embers can be carried miles by the wind. And they can still be burning when they touch down. This is how wildfires often breach established firelines.

The only beneficial side effect of the wildfire smoke was that we didn’t reach the predicted high temperature of 117°F. We came in at “only” 115°F. The brown carbon (not being black) reflects sunlight back out into space. Less sunlight reaching the ground means less solar heating.

Not the best way to combat global warming though. Even if we had some local cooling, wildfires release 8–60 tons of CO2 per acre burned. Globally, that amounts to 2.1 to 16.2 billion tons of CO2 annually. To put that into perspective, the global total for CO2 emissions was 40.1 billion tons (in 2019). So even in a good year, wildfires contribute 5% to the total CO2 emissions.

Next Week in Sky Lights ⇒ What UAPs Aren’t