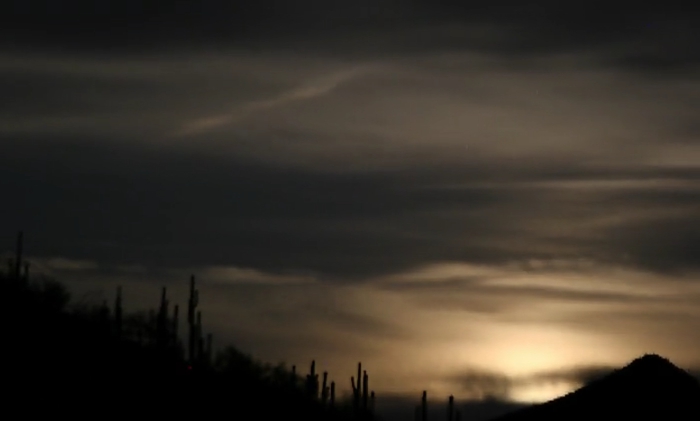 Obviously, the entire evening was a bust. Heavy clouds moved in and covered most of Arizona. Astronomers statewide were frustrated at missing this cosmic display. I got up early anyway just in case the clouds cleared, but the clouds were even worse. Unlike the uneclipsed Moon rising, the much dimmer eclipsed Moon setting could not be seen through the clouds.

But I did get this cool shot of the clouds moving in. The moonglow nicely silhouettes a stand of saguaro in the foreground. And as the clouds drift north, they develop interesting wave-like undulations not as easily discernible in real-time. These are gravity waves — a result of the moving air encountering mountains as it climbs into the foothills. Alas, as often happens during astrophotography, an airplane cuts across the scene near the 20 second mark.

Next Week in Sky Lights ⇒ Wildfires and Air Quality