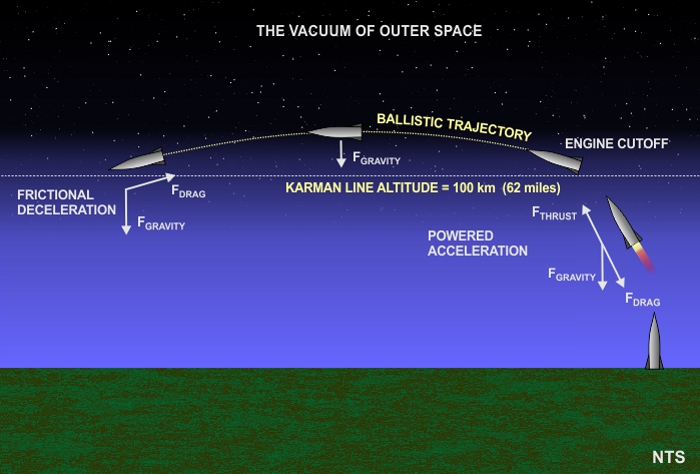 Question: At what point during the history of science did we discover outer space was a vacuum? I’m pretty sure it was before we actually went there, but when did we know for certain? — MC, Algoma, WI

Answer: Excellent question MC. And the answer is a great example of how science builds on existing knowledge, sometimes in circuitous paths, sometimes to dead ends, but often to new discoveries. The idea that space is a vacuum took centuries to evolve from hypothesis to fact.

But if you’re looking for “absolute proof” it was in the mid-1940s when Germany fired V-2 rockets across the English Channel from Peenemünde. These rockets were the first to reach outer space (top graphic). Near the apex of their flight they were observed to move along a ballistic trajectory — motion in which gravity is the sole acting force. Ballistic motion can only happen in a vacuum.

The chart below shows how both atmospheric pressure and density decrease exponentially with altitude. At 100 km most of the atmosphere (99.9999%) is below you. 100 km also marks the Karman Line (shown in the main graphic), generally considered the “official” start of outer space. Above this altitude aerodynamic flight is no longer possible. Wings are useless. Only rocket thrusters and gravity can affect your motion.

V-2 rockets could reach 120 km altitude if fired vertically. When launched at targets in England they typically peaked around 80 km, but even at 50 km there’s already a pretty good vacuum.

So it wasn’t until the 1940s that we had incontrovertible proof that space was a vacuum. But scientists in the 1700s were already 99.9999% sure it was. This certainty emerged over centuries of careful observation, thought, and experimentation. Here’s the major steps down that path …

So by the end of the 18th century science was fairly certain space was a vacuum, but it would be another 150 years before anything actually got there. The rocket scientists at Peenemünde “aimed” their V-2s assuming space was a vacuum and were not surprised by the results. Unfortunately, the residents of England were surprised — when the V-2s reentered at supersonic speed giving no audible warning of their imminent impact.