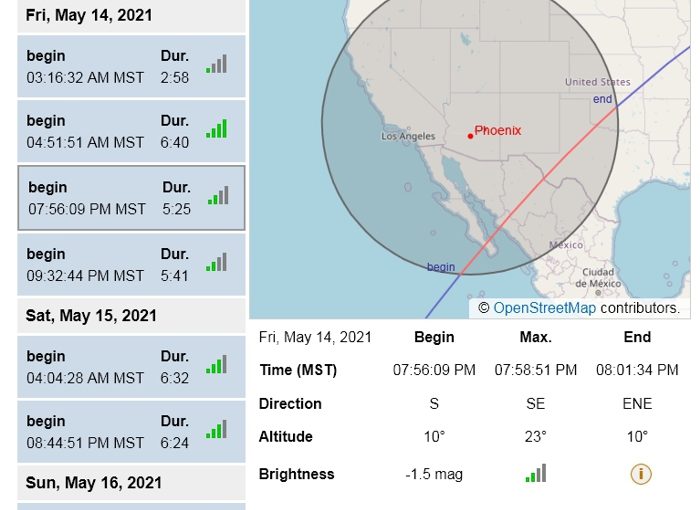 This ISS flyover happened back on Friday May 14. I finally found the best camera settings for an ISS time-lapse. Those were: Δt = 1/20 second, f/2.8 with my Zenitar fisheye, and ISO 3200 (the high limit for my Canon 20D).

Curiously, you can see the ISS get “overtaken and passed” by an airplane. Airplanes mess up a lot of otherwise great astrophotos. In this case, it demonstrates an interesting optical illusion caused by the relative distances to the two objects. That airplane was maybe 8 miles away moving at 80-90 mph — the ISS was 450 miles away and moving at 15,500 mph! Closer objects always look faster. Check out the map from AstroViewer. I’m located just above the red dot marking Phoenix. 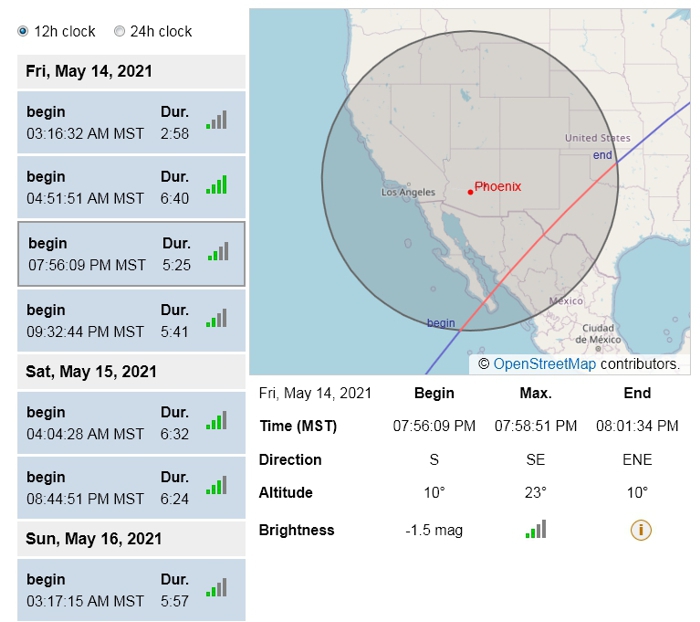 Unfortunately, my wide-angle lens wasn’t quite wide enough and the ISS went out of frame about 10 seconds before it entered Earth’s shadow. The bright dot of the ISS fades to black in a matter of seconds. It’s a surprisingly abrupt event and I’d like to catch it on video. Watch for it in a future post.

I should also mention that I wasn’t able to use my intervalometer for this time-lapse. The most rapidly it can trigger the shutter is once every second. The ISS moves too far in that time and smears into a streak in the image, as you saw in my previous attempt, so I needed to trigger the shutter manually. With the camera’s buffer lag, that allowed me to get around 4 photos per second. And yes, my thumb was cramping after the shoot. Newer DSLRs come with built-in intervalometers and faster buffers.

Predicting Orbital Debris Reentry
Q&A: How We Knew Space Was a Vacuum
HOME