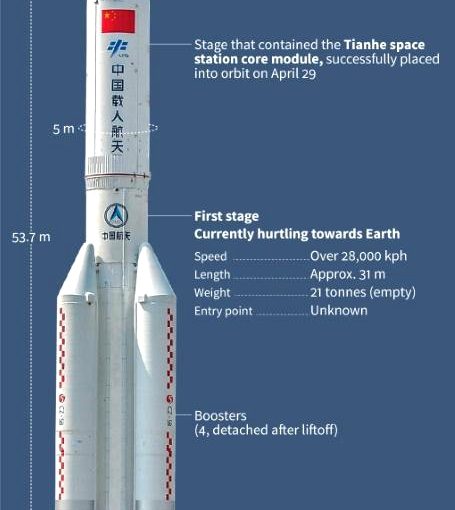 The recent “uncontrolled” reentry of a Chinese Long March 5B rocket booster made several readers wonder: Why couldn’t the impact point be predicted until the last few hours? This animation of ISS and HST orbits shows the first reason why. Unless an orbit is directly above the equator, or is geosynchronous, it will pass over different parts of the planet every time around. That red line is Earth’s orbit. Speed-up factor = 1600X. [Animated with Celestia.]

Here’s what two consecutive ground tracks of that falling booster looked like: 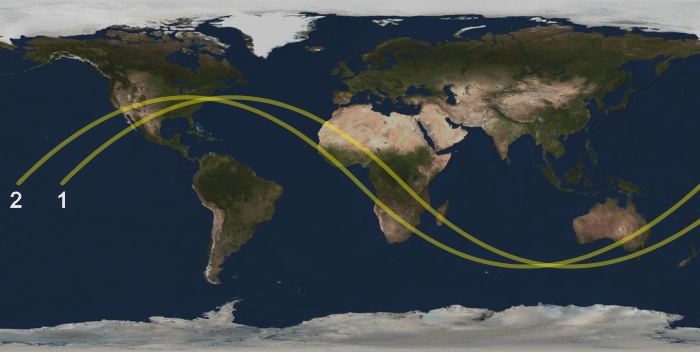 The booster had an orbital period of around 90 minutes. Earth rotates 15°/hr. So between the first orbit and second orbit Earth rotated to the east by 1.5 hr × 15°/hr = 22.5°. With a stable orbit this simple sinusoidal path is fully predictable. But for an orbit that’s decaying the period becomes shorter and more highly variable. The incoming booster’s orbit was inclined by 41.5° to the equator, so all that was initially known is that it would impact somewhere between latitude 41.5° N and 41.5° S.

The Long March 5B rocket is 53.7 m (176 feet) in length. The stage that de-orbited was 33 m (108 ft) long and weighed more than 20 tons. It was the sixth-largest object ever to reenter Earth’s atmosphere. This photo shows the rocket schematically. It was the first stage (sans boosters) that fell back to Earth, ultimately splashing down near Maldives in the Indian Ocean. 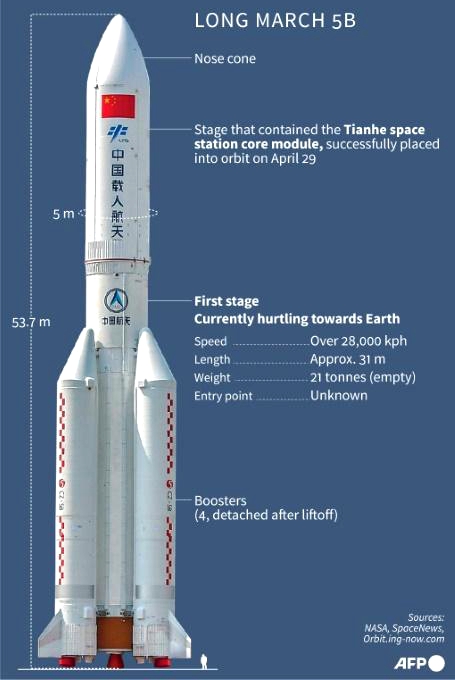 Not much of the booster survived re-entry. With the exception of some heat-resistant components made from stainless steel, titanium, and ceramic, the majority burned up as it entered Earth’s atmosphere at speeds near 8 kps (5 miles/sec).

Reentry began over the Arabian peninsula, some 2500 km from splashdown. During reentry prediction gets really complicated. Uncontrolled reentry is a chaotic process. How fast reentry happens depends on whether the booster is tumbling, or has settled into an aerodynamically stable orientation. This has a huge effect on air drag.

As I explained in Space Walk Physics, we can calculate the air drag if certain parameters like size, speed, and air density are known. But atmospheric density fluctuates on a daily basis, further complicating reentry predictions. Take a look at this chart showing how the “reentry window” narrowed as time to impact drew near. 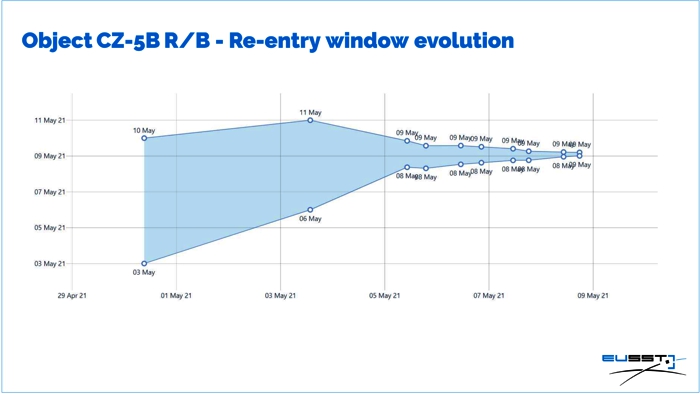 So we got lucky this time despite the uncontrolled reentry. Truth be told, the odds of anyone being injured by this space junk were pretty slim. 70% of Earth’s surface is water. And a lot of the dry land is unoccupied. You actually have “better” odds trying to win the lottery or being struck by lightning.

Still, controlled reentry is becoming the protocol for space-faring nations. Small amounts of fuel can be reserved for intentionally de-orbiting used components. Intentional tumbling can also be initiated to accelerate breakup. And the Pacific Ocean is a pretty big target to aim for.

Next Week in Sky Lights ⇒ ISS Over Phoenix v.2

Q&A: How to Make Fuel From Ice
ISS Over Phoenix v.2