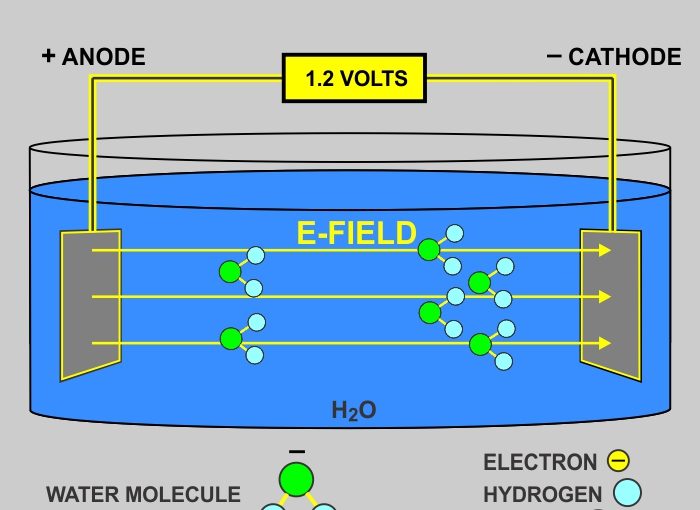 Question: I know there’s water ice on the Moon and Mars, and I get how it can be melted and used for drinking, but I don’t get how they can make rocket fuel out of it. I read it involves something called “electrolysis”, which I don’t understand. Never took any chemistry. Could you explain how electrolysis works? — WJ, Provo, UT

Answer: The chemistry of electrolysis is fairly simple. In general, the process of electrolysis is used to extract desired chemical elements from either a liquid solution or melted solid. An electrical current is run through the liquid between two metal electrodes usually made from an inert metal like platinum.

Water ice (H2O) can be melted and subjected to electrolysis. In this case the desired extracts are oxygen (O2) and hydrogen (H2), which together can be used for rocket fuel. They’re also good for things like cooking, heating, welding, and smelting. The animation shows the electrolysis of pure water.

You’ll note that 6 water molecules initially participate in this reaction, and 4 are synthesized from the “waste” of the process. This suggests 2 water molecules have been “consumed”. The chemical formula is:

Of course, there are some intermediary steps in the overall process involving hydroxide ions (OH−) and hydrogen ions (H+). This can be seen in the two half-reaction formulae:

Pure water is not easily electrolyzed because of its high resistance to electric currents. In practice, a source of additional ions (acids or salts) is added. Further, the 1.2 volts shown in the animation is the minimum voltage for water electrolysis. Higher voltages are used for commercial electrolysis operations.

NOTE: The animation shows a vastly simplified choreography for the electrolysis reactions. In real reactions there are countless molecules and ions participating in the process, reactions take place in microseconds, and the particles move along zig-zag paths colliding with other particles that don’t react.

On the Moon or Mars electrolysis could be scaled up to produce whatever quantities of H2 and O2 are needed. For rocket fuel both these gases need to be liquefied, but for other uses regular pressurized tanks would suffice. And as I’ve noted in other posts, making your own fuel on the Moon or Mars is hugely less expensive than hauling it there from Earth.