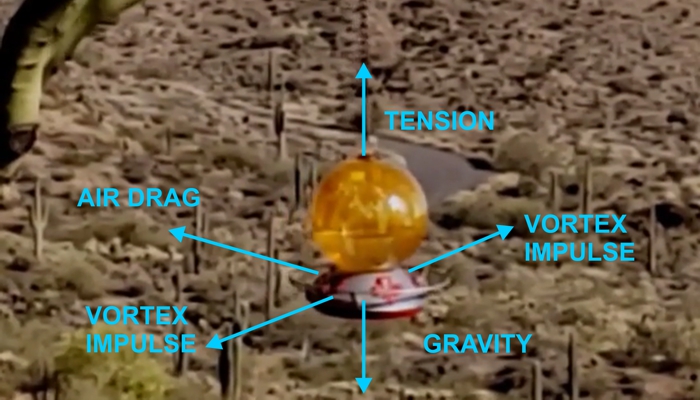 While out on my deck reading I noticed our hummingbird feeder exhibiting some curious periodic motion. We had recently moved it from under the soffit to a palo verde tree to avoid spilling nectar on the flagstone. It was a windy day, maybe 10–15 mph variable. The video shows four distinct modes of oscillation: crosswind, orbital, windward, and vertical. The vertical oscillation was the weakest so I included two segments of that motion.

You should also know that the wind is rarely laminar at my location on the side of a mountain. Turbulent gusty flow is more the norm. That made the appearance of these periodic motions even more curious. The graphic shows several contributing forces acting on the feeder:

Let’s take a closer look at each of them …

Despite the random and variable nature of these forces, somehow “order” manages to emerge in the form of (temporary) periodic motions in several modes. How does this happen? Chaos theory provides some insights. The mathematical basis of chaos theory is beyond the scope of this blog, but as applied to a physical system like my bird feeder it says this:

In a complex many-body many-force system, the system will evolve through predominately chaotic states. But some systems contain “strange attractors” — states that, once reached, are temporarily stable.

Chaos theory has applications in physics, meteorology, traffic flow, crowd dynamics, and even the stock market. As applied to bird feeders swinging in the wind, it’s overkill. Suffice it to say that the four modes of oscillation are strange attractors for this system. They arise because (unlike many systems) a pendulum has an inherent periodicity that dominates random perturbations from the wind.

That weak vertical oscillation isn’t surprising, since it had little to do with pendulum motion. The 5 cm diameter branch the feeder was suspended from has it’s own natural resonant frequency. When I “pluck” it, the branch vibrates up and down with a period of around t = 1 s. You can see that in the video. The branch is oscillating in the wind almost continuously, but that vertical oscillation only becomes apparent when all horizontal forces temporarily cancel out so the feeder isn’t moving laterally. And that only rarely happens.

Next Week in Sky Lights ⇒ The Persistence of Contrails

Q&A: The Sound of a Bell on Mars
Q&A: The Persistence of Contrails
HOME