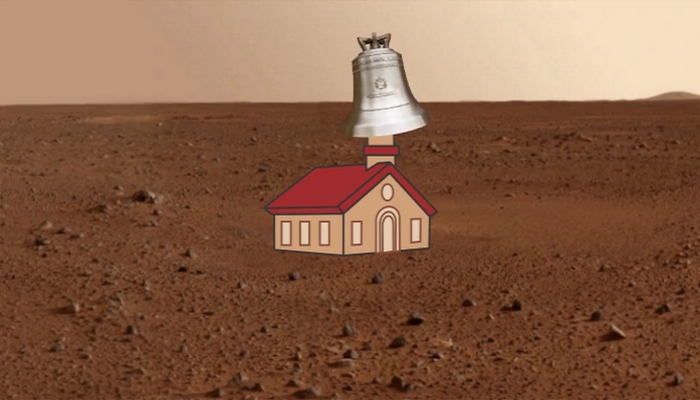 Question: How would the sound of a bell on Mars differ from the sound of the same bell on Earth? — KS, Benson, AZ

[NOTE: headphones recommended for this animation and for the audio tracks below.]

Answer: The most obvious difference would be an attenuation (decrease) of the bell’s loudness. Atmospheric pressure on the surface of Mars is only 6 mbar — less than 1% that on Earth. Its density is 0.020 kg/m3, about 1.7% of Earth’s 1.2 kg/m3. Pressure and density affect both the loudness and speed of a sound. Let’s look at speed first …

Sound waves propagate by molecule-to-molecule collisions in a gas. The greater the mass of the molecules, the higher their inertia, and the more slowly they respond to collision forces. The atmosphere on Mars is 96% CO2 whereas Earth’s atmosphere is 78% N2. CO2 molecules have 56% more mass than N2 molecules, and this reduces the speed of sound on Mars. Here’s one formula for the speed of sound in a gas (with comparative values for Mars and Earth appended):

You can see except for R (a universal constant), every other value lowers the speed of sound on Mars. Units provided (or not) are irrelevant for this proportional comparison.

Based on calculations the speed of sound on Mars = 240 m/s (540 mph). On Earth the speed = 340 m/s (760 mph). So if a distant source of sound, say a rocket launch, were being observed, the 42% delay in sound arrival time would be obvious. But for nearby sources, like a geologist hammering a rock, the delay would be imperceptible. Interestingly, preliminary data from analyses of rover data suggest the speed of sound on Mars may be as high as 285 m/s (638 mph).

Atmospheric composition also affects the timbre of a sound. CO2 absorbs high audio frequencies. The CO2 molecule is triatomic and has multiple vibration and rotation modes for absorbing acoustic phonons. The longer mean free path between molecules (10,000 nm on Mars vs. 68 nm on Earth) also acts as a high frequency filter. You can see this high frequency roll-off in the chart below. You can hear it dramatically in the following comparison, since bicycle chimes predominately emit high frequencies. Simulation courtesy of NASA’s Sounds of Mars:

The Mars version was produced by NASA’s computer model of how sounds propagate in a gas. I sampled the acoustic spectrum for both chime versions using Sony Sound Forge. Blue is chimes on Earth, red is chimes on Mars: 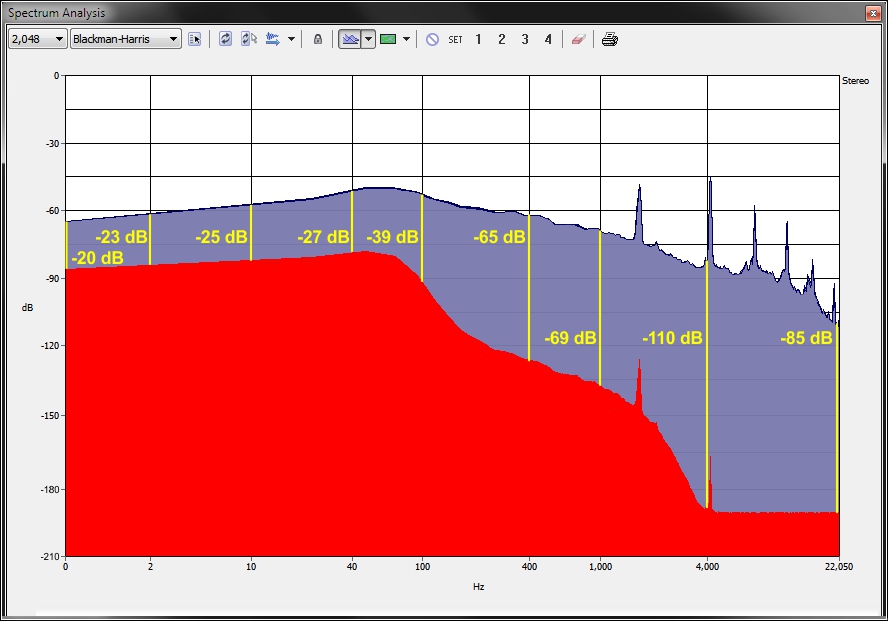 This graph shows sound frequencies (horizontal axis) spanning a range from 0–22,050 Hz. The wavelength of sound frequencies audible to the human ear is 20–20,000 Hz. Nonetheless, we can extract an approximate “envelope” for transforming Earth sounds into Mars sounds by looking at the decrease of decibel sound intensity in each band of frequencies (yellow values).

I used these −dB settings in the Sound Forge graphic equalizer to transform the peal of a church bell on Earth to how it would sound on Mars and used that in the animation. If you have a graphic equalizer you can apply this envelope to experiment with your own Earth-to-Mars sound transformations.

Beyond these harmonic differences, the 20 dB drop in overall volume would be the greatest audible change (which is why I recommended headphones). −20dB represents a decrease in sound intensity of ≈100X. Decibels can be equated to W/cm2 for sound power levels, and with an atmospheric density on Mars around 1% that on Earth, there’s only 1% of the air particles available to carry sound energy.

So for a church bell on Mars to sound as loud as its Earthly counterpart it would need to have a surface area 100X large than a bell on Earth. It’s the surface shell of the bell that vibrates and pushes on air molecules to create the bell’s sound. Since area scales as the square of linear dimensions, the Mars bell would need to be √100 = 10X larger than the Earth bell.

Note: The animation omits an important aspect of bell behavior on Mars. With gravity just 38% the strength of Earth’s, the motion of a “pendulum” would slow by √0.38 = 62%. So a bell that rings once every 2.5 seconds on Earth (as in the animation) would ring once every 4.1 seconds on Mars. This physics was omitted to focus attention on the bells sound, as KS asked about in his question.

Conclusion: If you really wanted the traditional bell sound on Mars, you could just build one 10X larger than usual. Overcoming the high frequency losses to get the traditional timbre would be trickier. You’d need to make the bell from an alloy that intrinsically rings at higher frequencies. That means the alloy must exhibit higher stiffness and lower density than the typical cast iron or bronze or brass. Perhaps a titanium bell would do the trick?