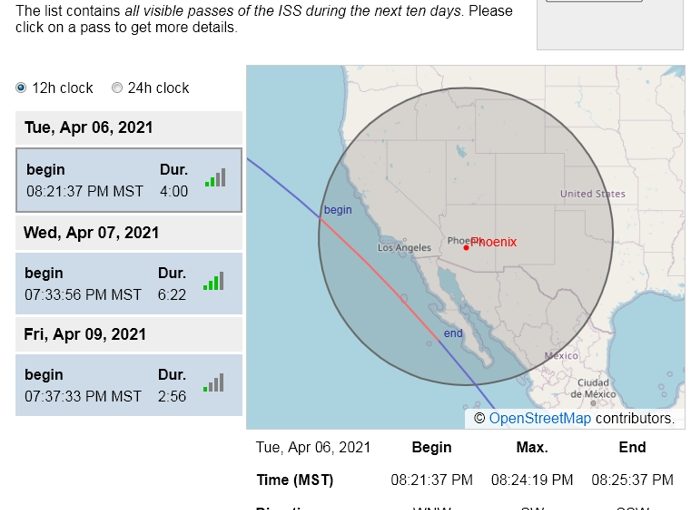 Here’s my second attempt to capture a flyover of the International Space Station (ISS). This time-lapse started about an hour after sunset, so the sky was considerably darker than in my first attempt. Exposure was reduced from 0.5 second to 0.4 second, and ISO increased from 200 to 800. I expected the ISS would smear into a streak again, but was more concerned about testing brightness and contrast since, as you can see, the ISS flew right into the dome of light pollution over Phoenix.

Before continuing, I have a special request for my readers. Sky Lights recently started a Facebook page:

That ungainly long numeral at the end of the page title is a result of not yet receiving 30 Likes. If you have a Facebook account and would take the time to Like my page it would really help. Thanks! And if you haven’t subscribed to Sky Lights, Facebook is now another way to keep up to date. </grovel>

This ISS flyover wasn’t expected to be particularly bright. Astro Viewer predicted “two bars out of four”, and the ISS was fairly low in the sky with a maximum elevation of 23°. Further, from my point of view, the ISS would fly directly into the dome of light pollution above Phoenix. Here’s the Astro Viewer map: 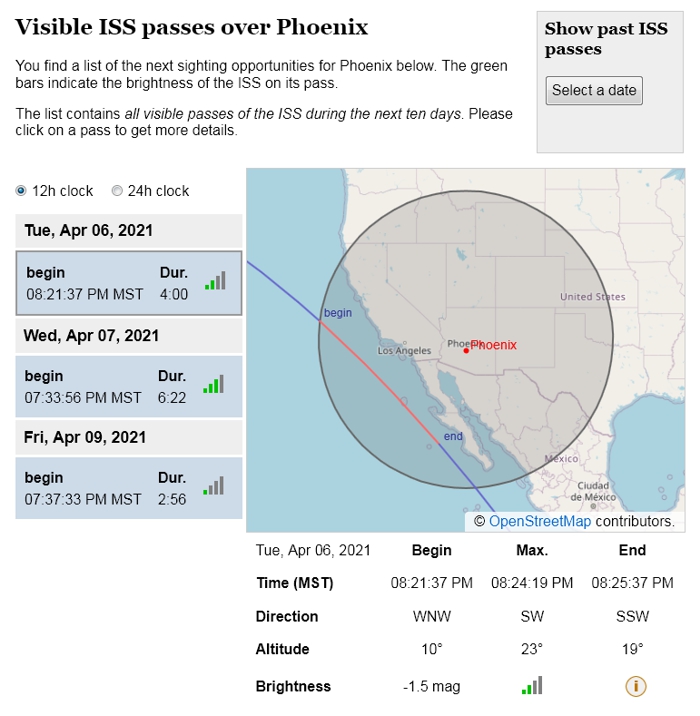 Obviously, I lied again in the title of this post. The ISS was actually “over the Pacific Ocean” about 100 miles off the Baja peninsula. From my location north of Phoenix it just appeared to be “over Phoenix” — not the best sky for photography. But I could see from my charts that it would pass through the constellation Orion in the southwestern sky, which would make for an interesting video. As it turned out, it passed so close to Rigel (the bright star in Orion’s western knee) that the star was probably occulted by the ISS maybe 5 miles south of here.

It’s worth noting that the brightest flyovers happen when the ISS passes directly overhead — that’s when it’s physically closest to the observer. Unfortunately, unless you have a true fisheye lens mounted on a roof and pointed straight up, you can’t capture the entire pass. My Zenitar K2 fisheye is designed for a 180° diagonal view and outputs a square frame.  Since my Canon 20D has a crop sensor, that view is reduced to around 98°. This is why I prefer shooting lower elevation flyovers, where I can fit the entire pass in the frame.

ISS flyovers come in groups over sequential evenings (or mornings). When the next evening flurry happens, I now have the correct settings to eliminate smearing and show the ISS as a moving point of light. Stand by.

ISS Over Arizona
Q&A: The Sound of a Bell on Mars
HOME