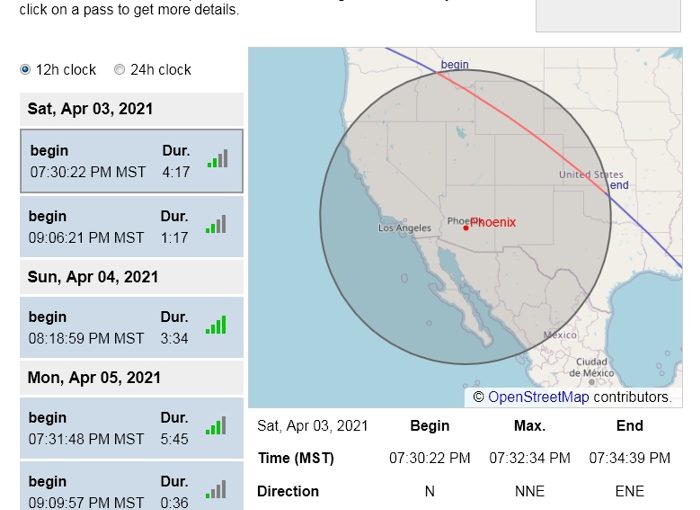 Since I sold my camcorder the only way I can shoot true video is with my Galaxy S9, and it doesn’t have wide angle mode like a fisheye lens. Yes, I could purchase an add-on smartphone fisheye for around $50, and I just might do that down the road. But I do have a Zenitar K2 f/2.8 fisheye for my Canon 20D so I decided to try a time-lapse recording of a recent bright flyover of the International Space Station (ISS).

A sequence of time-lapse images can be easily stitched together into an animation using most video editing software — I use Adobe Premiere. The playback rate can be set as desired. In this video the speedup factor is about 5X. Alas, even with a fisheye lens the ISS goes out of frame just before it enters Earth’s shadow. You can see the camera was aimed a bit too far to the west.

The larger problem is the ISS appearing as a streak of light rather than a point. To the eye, it appeared as a moving point of light, brighter than the stars in the handle of the Big Dipper (visible near top right). Duplicating that visual appearance in a time-lapse would require much shorter exposures. I had set the shutter speed to 0.5 seconds at ISO 200 — bad choices in hindsight.

The ISS moves with a speed of 7.9 kps (4.76 mi/sec). So during the 0.5 seconds of each exposure the ISS moved almost 4 km! That’s what caused the ISS to smear into a line. The ISS was 1400 km distant based on its altitude and horizontal range, so 4 km of motion translates into almost 0.2° across the sky — about half the diameter of a Full Moon. For my next attempt I’ll use a faster shutter speed at ISO 800.

Finding out when the next ISS flyover will happen is easy. There’s many apps for that. My favorite has changed twice as better apps became available. Currently I’m using a website called Astro ISS Viewer. Below is their tabulation for Phoenix, Arizona. It shows the display for Saturday, April 3rd when I did this time-lapse. You can see I lied in the post title about what happened  — the flight path wasn’t even close to “over Arizona”. This is why the ISS appeared so low in the northeastern sky. 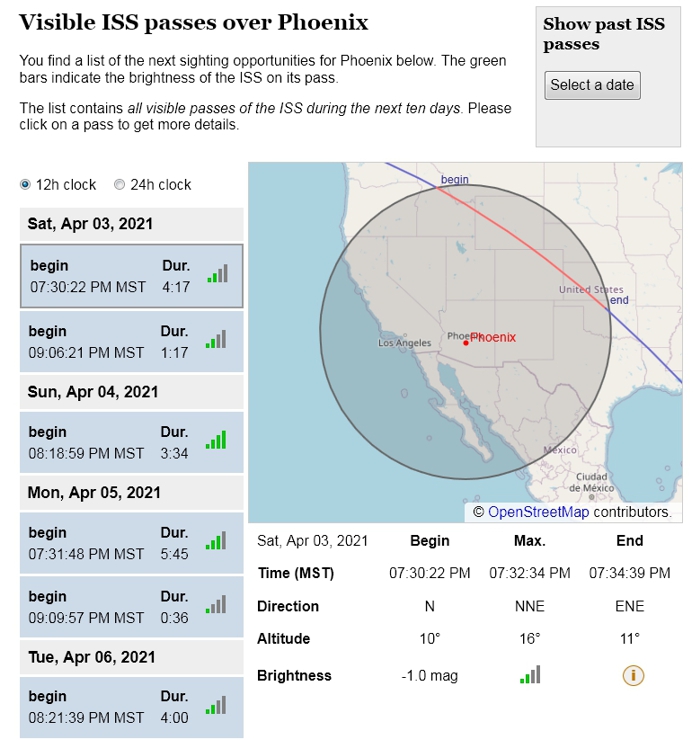 When I first started using Astro ISS Viewer if wondered why it used a 1200 km (760 miles) radius circle around Phoenix to show ISS visibility limits. That should be set by the altitude of the ISS and the curvature of Earth. And so I checked …

From the 420 km altitude of the ISS the distance to the horizon is 2350 km. So the ISS should become visible (theoretically) when it’s 2350 km from the observer. Based on Earth’s 41,000 circumference, this equates to 21° of Earth curvature as shown below. It assumes a clear view to the geometric horizon. 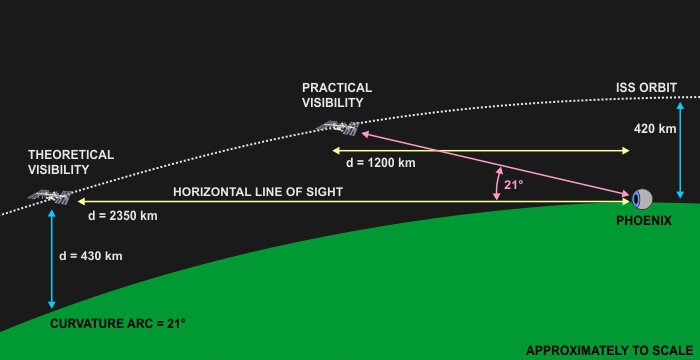 Astro ISS Viewer uses 1200 km to allow for atmospheric extinction. 1200 km equates to only 10.5° of Earth curvature, and an elevation of 20° above the geometric horizon for “first appearance” of the ISS. That’s been fairly accurate in my experience. But then, I live near the top of a mountain and enjoy a very clear view of the horizon in most directions.

At elevations lower than 20°, atmospheric extinction increases exponentially. That’s true in even perfectly clear skies. The ISS can reach a visual magnitude of −5.90, brighter than −4.92 Venus, but at 20° it’s already dropped a full magnitude, by 10° almost 2 magnitudes, and by 5° it’s down 3.

Nonetheless, when I attempt to photograph the ISS (digital timepiece in hand) I always start the shoot a few minutes early. My camera has plenty of memory and these ISS flyovers rarely last more than 5 minutes. At one frame per second (the maximum my intervalometer can do) that’s only around 300 images.

Next Week in Sky Lights ⇒ ISS Over Phoenix

2 comments on “ISS Over Arizona”