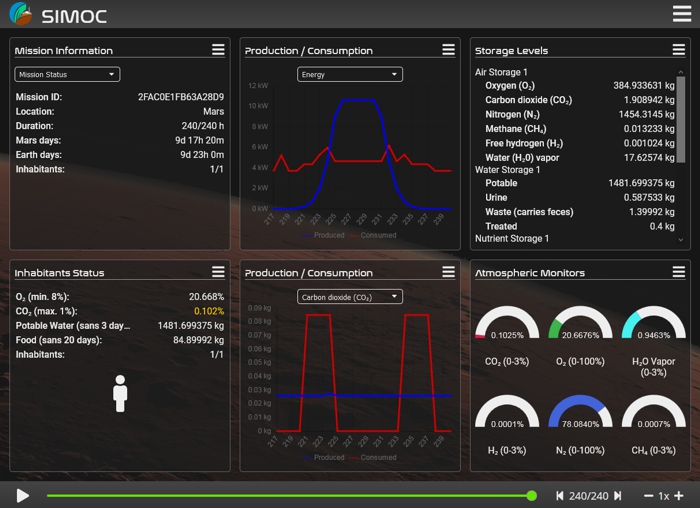 This block diagram shows the modules and data flows of SIMOC (Scalable Interactive Model of an Off-world Community). It’s a 2560×704 pixel diagram, so click to enlarge it and explore this complex computer model. SIMOC runs simulations to determine the long-term performance of self-sufficient human habitats on other worlds. At present, SIMOC is set up for simulating Mars colonies, but it could be used for other locations like the Moon or large satellites of Jupiter and Saturn.

Last week we looked at whether the ISS could be made totally self-sufficient and never require supply missions from Earth. The short answer was “yes” but the practical answer was “no”. However, in a colony on a moon or planet where outside resources (like water and minerals) are available, self-sufficiency is much easier.

For example, we know there’s water ice on both the Moon and Mars. Water can provide fuel (H2) and oxygen (O2) via electrolysis. Regolith on both bodies contains minerals from which other necessities can be extracted, like nitrogen for the air, phosphorous for fertilizer, and metals for construction and parts fabrication. Plus, there is solar energy available on both bodies: 1400 W/m2 on the Moon and about 500 W/m2 on Mars.

Scientists have created several computer and analog models to simulate how such colonies would fare given initial conditions and constraints — number of colonists, energy source, initial food supply, available outside resources, size of greenhouse and choice of plants, habitat volume, length of stay, etc. The models numerically follow the flow of resources (described last week) through the system, and will tell you if the system design works.

One of the more recent models is SIMOC. If you spent any time looking at the block diagram you saw how complex it is. I was recently invited by SIMOC Project Lead Kai Staats to try my hand at creating a successful Mars colony. I chose a relatively simple colony design for a single occupant, taking default values for most components. The slide show displays various stages of my mission. Note the panoply of parameters being monitored. 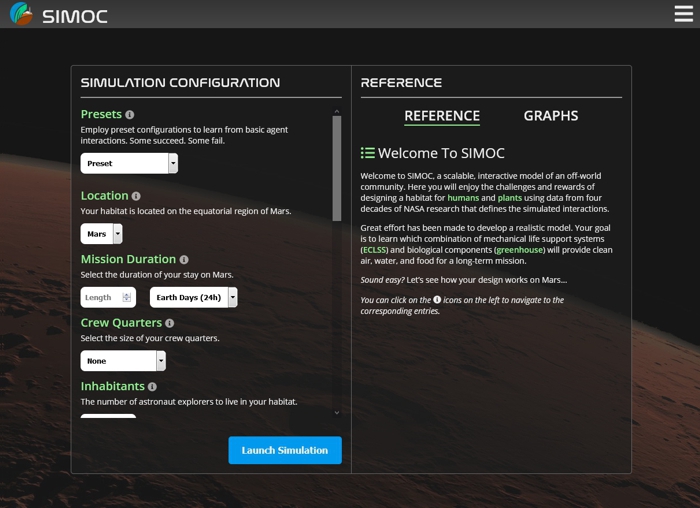 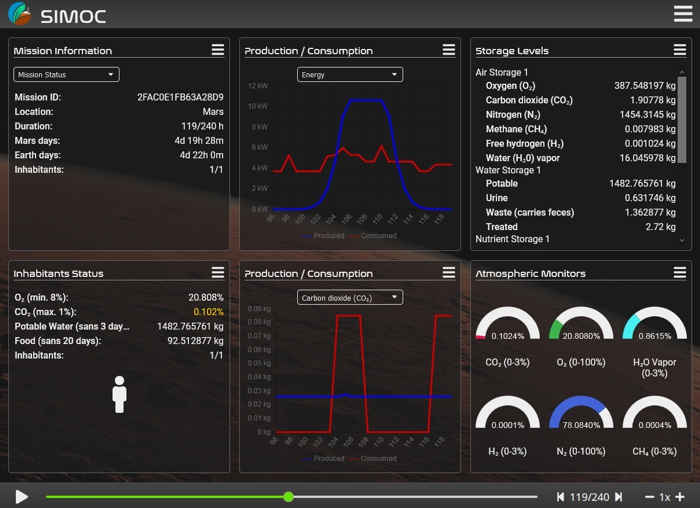 FYI, the periodically rising and falling graphs of energy and carbon dioxide correspond to periods of electrical production (solar array) and photosynthesis (greenhouse plants). SIMOC knows that a “day” on Mars lasts 40 minutes longer than a day on Earth. It also accounts for the latitude of your colony, which affects the amount and intensity of sunlight received. SIMOC utilizes government and academic databases for off-world environments and self-sufficient habitats for its initial calibration.

Another example of SIMOC’s sophistication is how it accounts for oxygen production. If you plant crops, until they start photosynthesizing all oxygen will be provided by chemical regenerators. As the plants begin to contribute oxygen the chemical backup is phased out — until harvest anyway. You can see these transitions happening in the UI and follow their progress.

I encourage you to try this model and design your own colony. You can run SIMOC as a “guest” without providing any personal information. If you’re an educator and want to use SIMOC in the classroom there are lesson plans and other resources available. To learn more about SIMOC go to:

To go directly to the SIMOC simulator, visit:

Staats in now in the process of constructing a Mars habitat on the Biosphere 2 campus. It’s called SAM (Space Analog for the Moon and Mars). Once operational SAM’s data will help to further calibrate SIMOC improving its predictive accuracy. You can follow the construction progress at:

When the first colonies are built on the Moon and Mars this type of research will be invaluable. Of course, until a real off-world colony is built and tested, we won’t know how well these computer models work. But the predictive ability of computer models is improving daily. And once we have additional calibration data from a real colony, the models will help us scale habitats to whatever size is desired.

Next Week in Sky Lights ⇒ The Polar Vortex