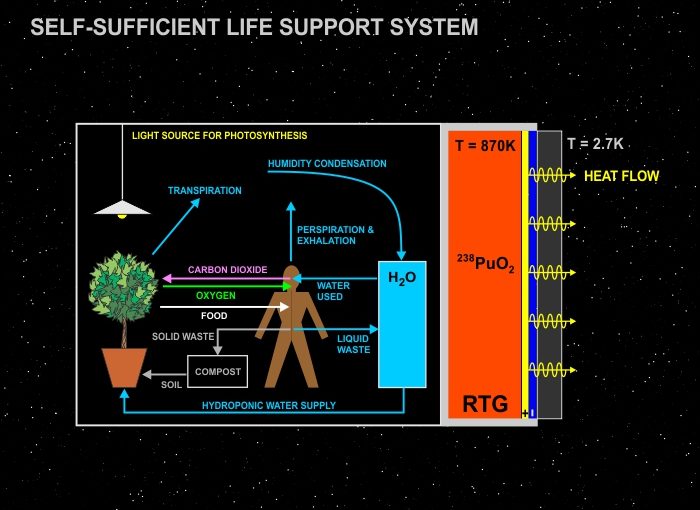 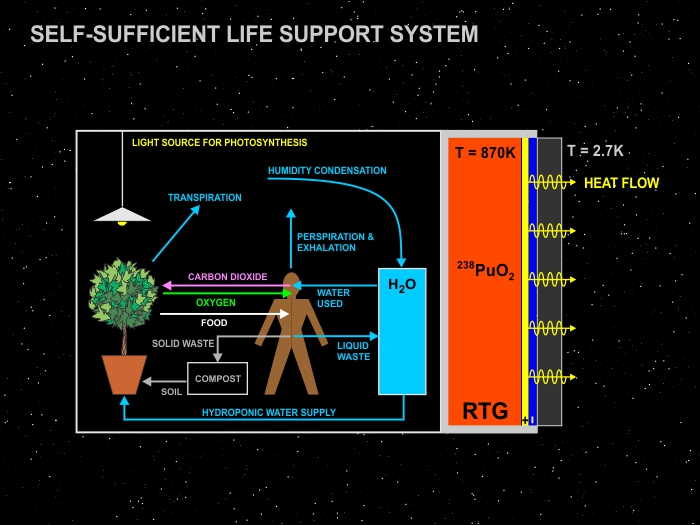 Question: I know the ISS gets supplies delivered every few months. What I want to know is if we’ll ever get to a point where the ISS can be totally self-sufficient? — WG, Hilo, HI

Answer: Not likely for the ISS, since resupplying is less expensive than making it self-sufficient, but we could if we wanted to. The technology required has existed for decades. Your question is more applicable to colonies on the Moon or Mars, where resupply missions would be considerably more complex and expensive. Further, the time delay for an emergency supply mission would be around 3 days for a Moon colony and 9 months for a Mars colony. Permanent colonies there would have to be self-sufficient.

The graphic shows what’s needed for a self-sufficient life support system in space. This represents a “worst-case” scenario where solar energy and other outside resources are unavailable. Vectors show the internal flow of water and other critical assets.

First and foremost, you need a long-lasting energy source. The best current technology for that is a radioisotope thermoelectric generator (RTG). It can be sized to provide all the energy needed for times exceeding human lifespans. RTGs are powered by the radioactive decay of plutonium dioxide, and create electricity from the heat flow between its core and the cold of outer space.

Here are the other critical components for this life support system:

Of course, such a system would be difficult to seal perfectly and would gradually lose both air and water to space. This loss could be minimized (at great expense) but could never be eliminated.

For example, the ISS reclaims only 93% of the waste water (at 3.6 gallons/day), with the remaining 7% lost through airlocks and solid waste. Every six months they need a delivery of 400 gallons, but some of that water is used to produce oxygen via electrolysis.

The ISS also leaks ≈0.06 kg of air every day. Some specific waste gases like methane from chemical processing systems are intentionally vented to space. And every time an airlock is opened ≈2 kg of air are lost. To make up for these losses, most resupply missions include several high-pressure oxygen and nitrogen tanks to keep their atmosphere topped off.

All the aforementioned difficulties stem from the fact that a truly self-sufficient ecosystem requires recreating the interconnected web of life that sustains humans here on Earth. And we’re still learning new science about how that works.

Interestingly, self-sufficient ecosystems (called ecospheres) were widely investigated back in the 1970s, motivated in part by the first celebration of Earth Day. Most ecospheres use brine shrimp as fauna and aquatic plants for flora. Take a look at this ecosphere still going strong after some 50 years.

And here’s one currently on display at the American Museum of Natural History (AMNH). Photo used for educational purposes with AMNH permission. 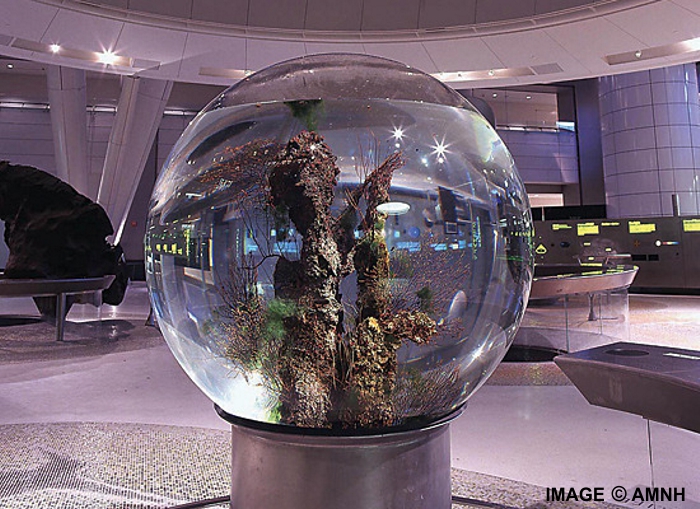 Nobody has ever created an ecosphere that included humans. Probably the closest attempt was at Biosphere 2 in Oracle, Arizona, managed by the University of Arizona since 2007. In the early 1990s Biosphere 2 ran two experiments with teams of “biospherians” to test their ecosphere design. Much was learned about the science of self-sustaining habitats, but chemical reactions with inert components complicated their data analysis.

Self-sufficiency in space is a tough challenge. But in a colony on the Moon or Mars, where some outside resources (including sunlight and water) are available, self-sufficient settlements are an attainable goal.

Next week we’ll look at SIMOC (Scalable Interactive Model of an Off-world Community). This Mars habitat simulator allows you to select astronauts, life support systems, greenhouse and plants. You can then set the simulation in motion to see how your design performs! A prototype Mars habitat is now under construction at Biosphere 2 employing a design based on the SIMOC model.

Next Week in Sky Lights ⇒ Surviving in Space – Part 2