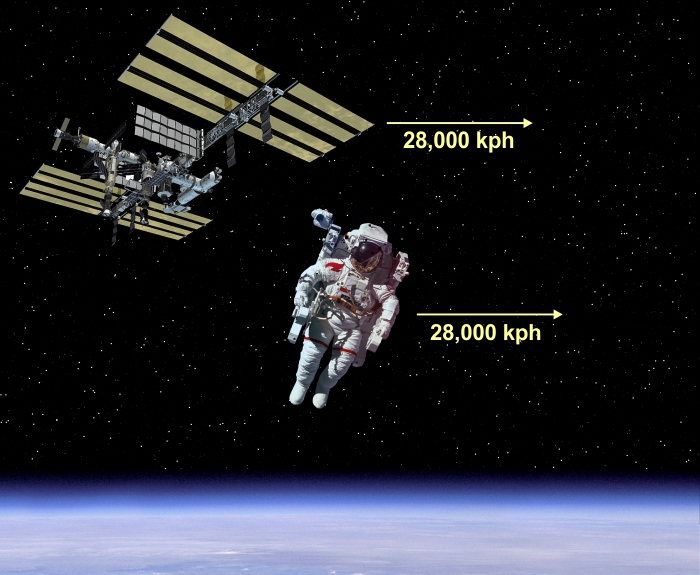 Question: I was watching the spacewalk where astronauts were upgrading some solar panels on the space station. What an amazing view of Earth! But I had to wonder why they didn’t get left behind when they went outside? — WT, Provo, UT

Answer: Space walking astronauts don’t get “left behind” because they already have enough speed to keep up with the ISS (or whatever platform they are space walking from). The ISS is moving with a speed of 28,000 kph (17,500 mph) in its orbit around Earth, some 380 km (250 miles) above the surface and well above the “top” of the atmosphere. And so is the astronaut, whose weightless mass still has the property of inertia.

Inertia is the tendency of any mass to not change speed unless acted on by a force. Here on Earth you don’t see this happen very often, simply because there’s so many sources of friction. But in the vacuum of space inertia dominates motion.

Astronauts exit the ISS through the Quest airlock hatch, shown below. While inside, the astronauts are necessarily moving with the same speed as the ISS. It’s like when you’re in a jet airliner — the plane is moving at a speed of 900 kph (600 mph) and so are all it’s passengers. You can’t really sense this horizontal speed during steady level flight. 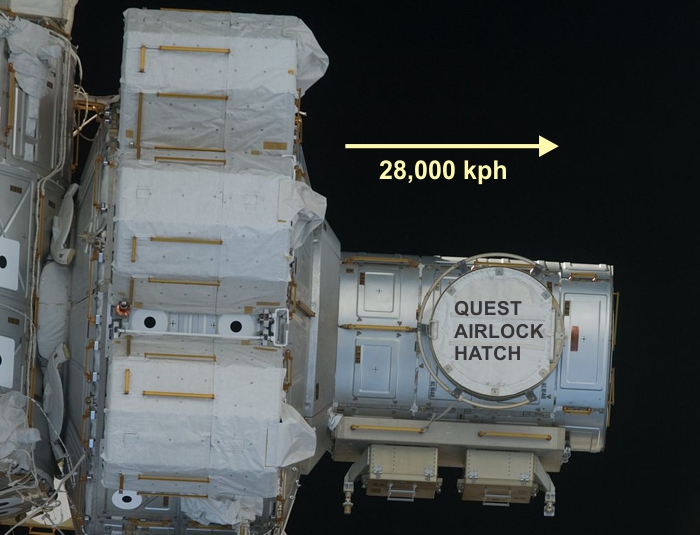 Of course, if you exited the airliner you’d be quickly swept away by the air moving 900 kph relative to the airliner. It would have the same effect on your body as a 900 kph wind (tornados only hit 450 kph). But at the altitude of the ISS there’s so little atmosphere you wouldn’t really feel any wind. At 380 km the atmospheric density is around ρ = 2×10−12 kg/m3 compared to its sea level value of 1.2 kg/m3.

We can calculate the amount of air drag force an astronaut would feel. The drag coefficient for an upright human body is CD = 1.0–1.3. With the space suit we’ll call it 1.5. The frontal surface area of the suited astronaut is around A = 1 m2. So the air drag outside the ISS would be:

Surprisingly, since the astronaut’s deceleration is slightly less, they will slowly drift ahead of the ISS instead of being “left behind”. With a relative acceleration of 1×10−7 m/s2 it would take:

to drift a distance of 1 meter. The typical space walk lasts a few hours, during which the astronauts are almost constantly tethered to latch points on the outside of the ISS. So this minuscule deceleration never really becomes an issue.

Next Week in Sky Lights ⇒ Surviving in Space – Part 1