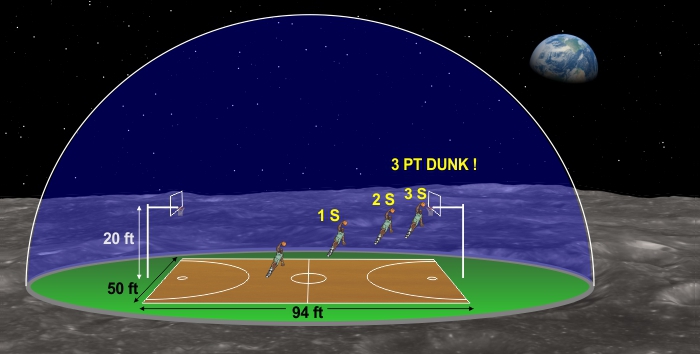 Question: I hear how several countries, and even some private corporations, are planning to build permanently inhabited colonies on the Moon. Eventually, I expect, colonists will want to engage in sports for fun and exercise. I’m a huge fan of basketball, and I wonder how the game would have to change under those conditions? I mean, there’s no air and less gravity. — DB, Phoenix, AZ

Answer: Several aspects of the game would change. But first, let’s assume players would want to compete in normal garb. Space suits, which would be needed outside the protective confines of the colony, don’t let you move around very freely. So the game would be played on an inside court with the same air pressure as the rest of the colony. The lack of air outside isn’t an issue.

Further, sports data shows that a running leap can attain greater heights than a standing (flat-footed) leap by as much as 22%. Turning horizontal speed into vertical height might seem to violate the laws of physics, but it’s all a matter of athletic technique. Elastic energy stored in muscles and tendons can create additional vertical height on a jump. It’s mechanically equivalent to using a trampoline under the basket.

So to preserve the difficulty of dunking the ball a fair rim height would be 20 feet. That accounts for the 10 ft jump, the 2.2 ft (22%) running boost, and 6-foot tall players with a 2 ft vertical reach. My proposed court design is shown to scale in the main graphic.

I don’t think there’d be any need to change the distance for the free throw line or 3 pt line, as scoring still comes down to accuracy. The ball would move more slowly along its trajectory between player and hoop — by a factor of six. That would make blocks easier on any shots from outside the paint.

Another interesting consequence of low gravity is the ability to make a “3 pt dunk” — which is, by the way, not specifically excluded in the official game rules. NBA players routinely dunk the ball from a step or two inside the free throw line. That’s a distance of around 10 feet from the rim and a hang time of 0.8–0.9 seconds.

Lunar gravity would extend the kinematics by a factor of six. That makes a dunk possible with lift-off occurring well into the back court — provided the player could get up to full speed before launch. The player needs to arrive at the rim near halfway through their full trajectory, when at maximum elevation. That’s a horizontal distance of 50–60 feet with a hang time of 3 seconds (to the rim). This feat is illustrated in the main graphic.

A less-obvious change to the game is the interplay between inertia and friction. The grip of your shoe on the floor depends on two things: the friction coefficient (μ) between the shoe and floor (a function of tread design and court surfacing), and the amount of weight pressing that shoe against the floor: 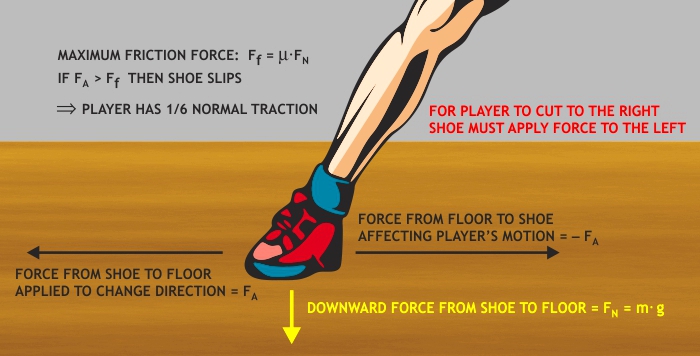 With only 16.5% of normal weight, on a regulation wooden court, that makes acceleration (starting, stopping, changing direction) more difficult. As explained in the graphic, friction provides only 16.5% of the force you’d need to make the same moves on Earth. Newton’s Second Law tells us: a = F/m. Players still have the same inertia (m) they had on Earth, but with 16.5% of their weight they only get 16.5% of the frictional forces needed to accelerate their mass.

Here’s a more tangible explanation: Imagine trying to play basketball on a standard wooden court, but with only your athletic socks and no shoes. That’s about the traction you’d have on the Moon — even with shoes!

Changes could be made to the shoe soles and court surface, but there’s a limit to how far that could compensate. You don’t want to play the game with Velcro shoes on carpeted courts. Lower gravity would definitely slow the game.

The mechanics of running itself would also change. This video of Eugene Cernan (Apollo 17) shows what astronauts found to be the most efficient gait when moving around in lunar gravity. They described it as a “skipping and hopping motion”. Their space suits were cumbersome, sure, but the movement was more a result of changes in timing between when you started a step and completed it. The act of walking (and running) has been described by physiologists as a controlled fall.

In basketball, this movement limitation affects several aspects of the game: fast breaks, slow dribbles, Euro steps, pick & rolls, and even the safe spectator distance (extrapolate where that player in the main graphic would come down). It just wouldn’t be the same game in terms of speed and physical action.

And finally there’s the ball. It would have the official mass of 0.62 kg, and hence the same inertia resisting your attempts to accelerate it. But on the Moon it would weigh only 3.6 oz vs. 22 oz on Earth. That’s a little heaver than what a tennis ball weighs on Earth. This would totally change the “feel ” of a shot. Further complicating the task, the ball needs to be launched with only 16.5% of the speed required on Earth for any given distance.

I suspect experienced players would adapt in time, and it would be very interesting to see how long that takes. Of course, if you were born on the Moon and learned the game there, playing on Earth would be a challenge.

3 comments on “Q&A: Basketball on the Moon”