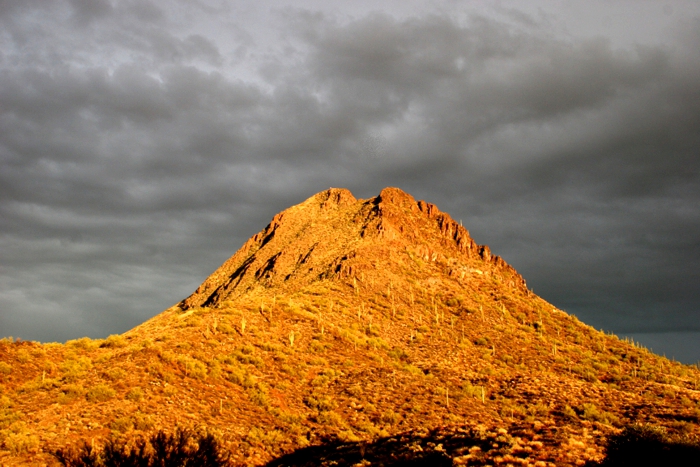 Spell-check didn’t care for the title of this post. But I reasoned that since the words “moonshine” and “gegenschein” were valid, then what you see in this photo could rightly be called “mountainshine” — in all cases you have a distant object reflecting sunlight, and a strongly contrasting dark background. That mountain, known as Gavilan Peak, is about half a kilometer east of me.

I had my camera ready because I was expecting a rainbow. It rained intermittently all day, and I could see the Sun was going to drop under that thick cloud cover just before it set. These are the conditions in which I’ve gotten some of my best rainbow photos. Alas, no rainbow appeared, but the mountain was lit up with intense golden light. The contrast of the dark background sky made it all the more striking.

Gavilan Peak was actually “shinier” than usual, with its rocks and flora still wet from the rains. This coating of water reflects more sunlight than dry objects, changing the mountain’s albedo. The dust that causes gegenschein has an albedo of 0.06 (reflecting 6% of the sunlight that strikes it). The Moon’s albedo is around 0.12. I’d estimate the albedo of that wet mountain is somewhere around 0.3.

So I didn’t get the rainbow I was hoping for, but I did get this cool photo of Gavilan Peak. Not that much science here. But as I’ve often said, sometimes Sky Lights is just about pretty pictures.

Q&A: Why There are No East or West Poles
Q&A: Pillow Clouds
HOME