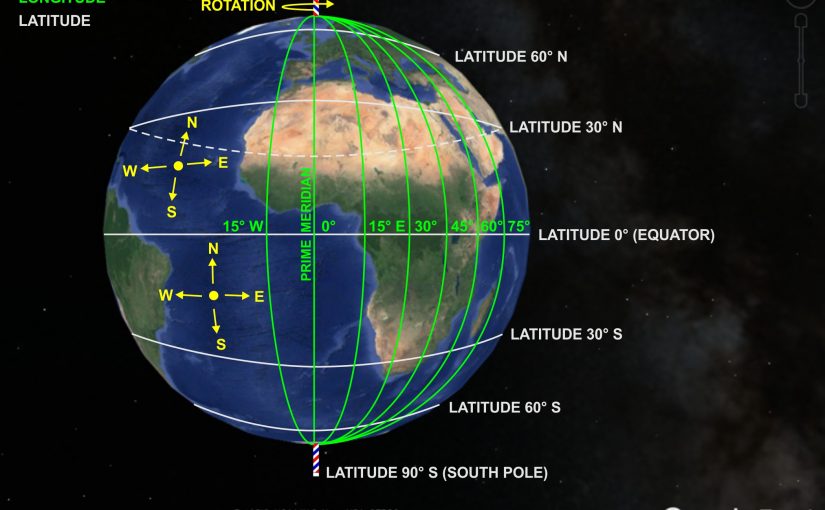 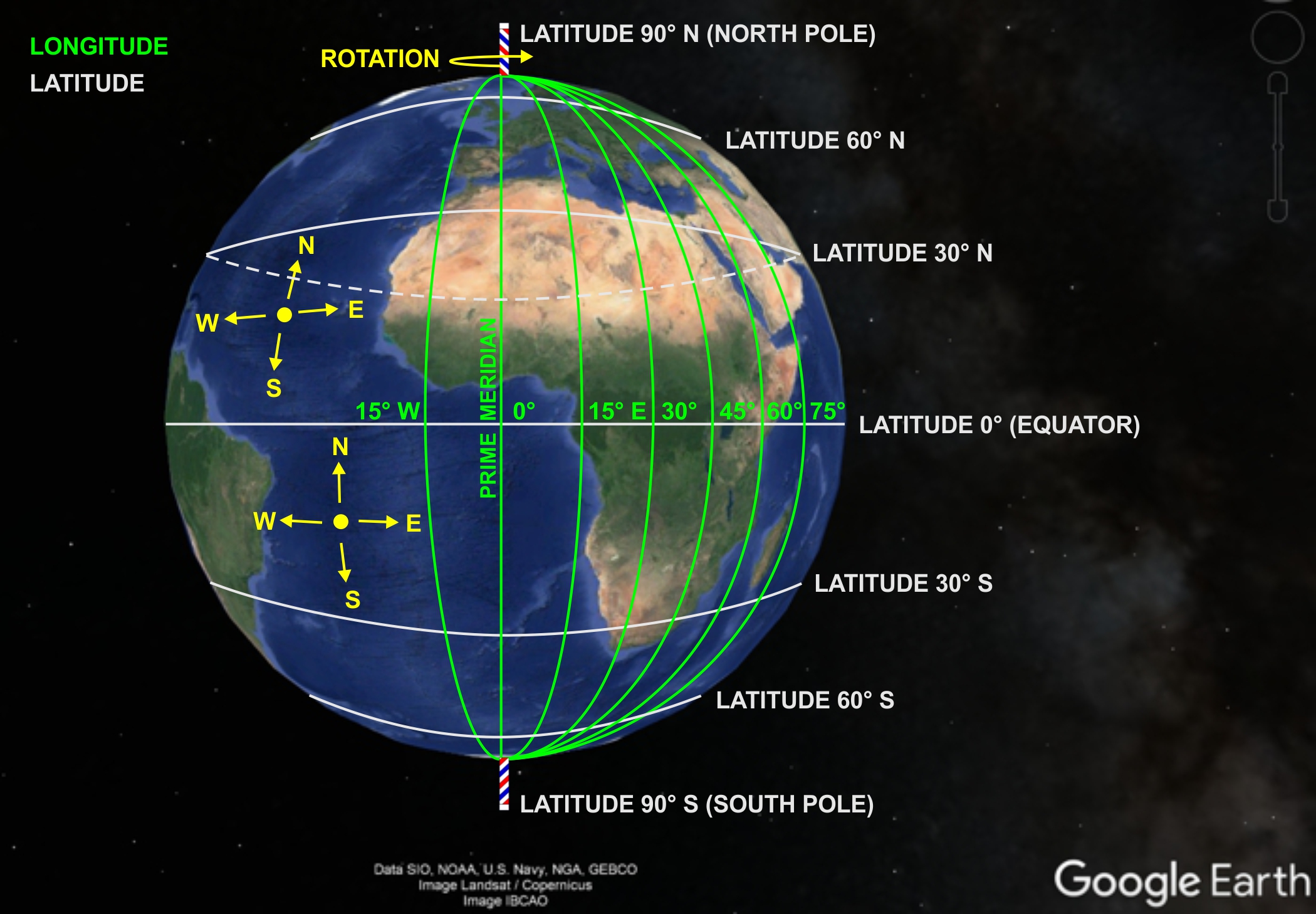 Question: We learned about the north and south poles in geography class this week. I asked my teacher where the east and west poles were. He told me if I found the answer online and I reported it to my class I’d score extra credit. My home-schooled friend said to ask you. Thanks!  — CC, Dayton, OH

Answer: I can answer your question, but remember to write your own explanation and not just copy mine. You’ll earn more extra credit that way. The short answer is: There are no east or west poles — “east” and “west” can only be directions, whereas the north and south poles are places.

If you learned about the north and south poles then you must have learned about latitude and longitude. The graphic above is a review of those concepts. The whole point of latitude and longitude is to provide a numeric way to locate place on the surface of Earth. Every point on the Earth needs its own unique “address”. There’s more than one way to do that, but the latitude/longitude system is easiest.

If Earth were flat you could simply use (X,Y) coordinates like you do on graphs and paper maps. But since Earth is a 3D sphere we need more “flexible” coordinates. It turns out that a system of lines running parallel to each other (latitude) and another system of lines perpendicular to those (longitude) works perfectly. These are the gray and green lines, respectively, in the graphic.

On a globe you’d see lines of longitude every 15° all the way around, and latitude lines every 10°. To keep the graphic simple I showed just enough lines to explain the system. And only the 30° N latitude line is shown continuing 360° around the globe. All latitudes lines do that.

This latitude/longitude grid facilitates quantitative descriptions of geography. For example, we can now say: The continent of Africa spans 60° of latitude and 105° of longitude. Or: The southernmost cape of Africa is located at 30° E, 35° S.

Because Earth rotates it has an axis of rotation intersecting its surface at two points. These are the north and south poles. Geographers chose these points for where the longitude lines would converge. This has several advantages …

Latitude could now be used to orient your position with respect to the stars, and longitude could be used to correlate the time of day with the position of the Sun. These were essential tools in the 1400s, when the globe was first explored and mapped.

So that leaves us with only two poles. You can travel west or east indefinitely, circling Earth as many times as you want, and never reach a pole. Heading north or south is a different experience. If you start traveling north you’ll eventually reach the north pole. At that point, the only direction you can travel is south: 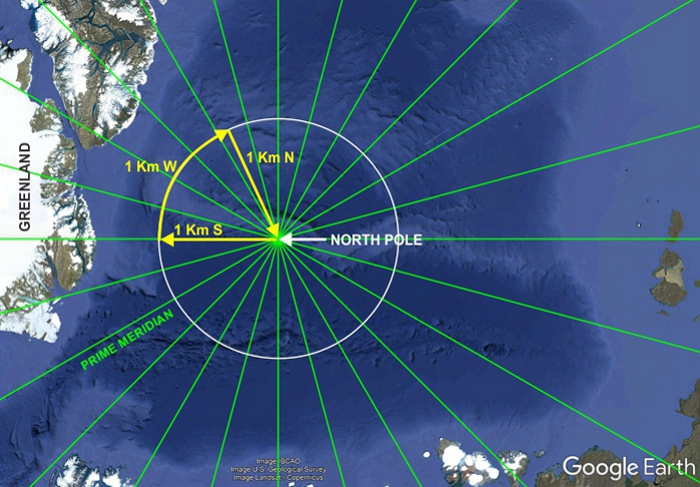 Which brings us to an old but related riddle …

The answer is: The bear was white. Given the distances and directions, the only place this hike could happen is if the bear were at the north pole. Ergo, that was a white polar bear. Follow the yellow path in the graphic above to see how that works.

Interestingly, there’s an infinite number of places where those distances and directions return you to the same location. Consider the following geometry: 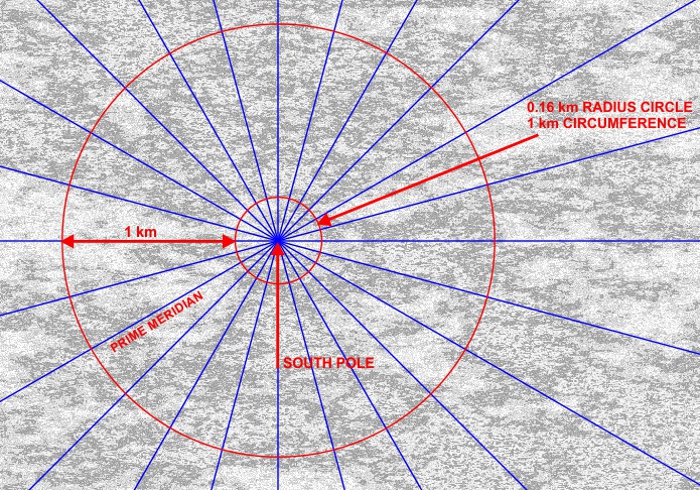 If you start at any point on the larger red circle around the south pole, going south for 1 km will bring you to the smaller red circle which has a circumference of 1 km. Traveling west for another 1 km brings you back to the point where you entered that smaller circle. Traveling north for 1 km now returns you to your starting point. Unfortunately, there are no “south polar bears” to turn this into a riddle.

I’ll close with a little-known piece of geography trivia. In the top graphic you can see that the prime meridian (0° longitude) and the equator (0° latitude) intersect at a point in the Atlantic ocean around 600 km off the coast of Ghana. When either of those lines run through a town or tourist spot there’s usually a monument of marker designating the exact location. At the point where the equator and prime meridian intersect there is a tethered buoy called Null Island. Antipodal to that, where the equator intersects the anti-meridian (180° longitude), there is no such marker. That point is thousands of kilometers from the nearest land in the middle of the Pacific Ocean.

2 comments on “Q&A: Why There are No East or West Poles”