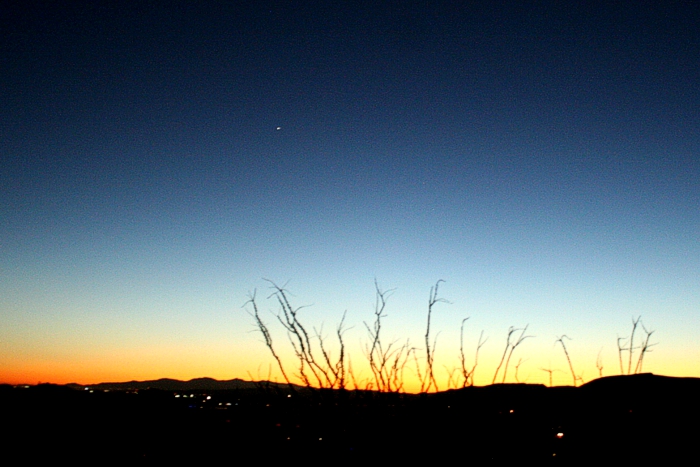 The Grand Conjunction of Jupiter and Saturn on Dec 21, 2020 was a chance to experiment with a new (at least to me) astrophotography technique: afocal imaging with a smartphone camera. Most astrophotos you see in Sky Lights were taken with my Canon 20D, using either a telephoto or wide angle lens, or by mounting it to my telescope with a T-adapter for eyepiece projection. I wasn’t expecting afocal to produce equally high quality images, but wanted to give it a try.

The photo above shows how the conjunction looked to the unaided eye. The discs of Jupiter and Saturn were pretty much blurred together into a single point of light. They were fairly low in the sky, around 20° elevation, so the view was through hazier air. Still, binoculars showed the two planets separately, Jupiter with its four moons and Saturn with its rings and brightest moon Titan.

The photo below shows my afocal setup. After aiming the telescope and adjusting the focus, I positioned my smartphone camera above the telescope eyepiece using a tripod adapter to keep it steady. Alignment is critical: the camera must be parallel to the plane of the eyepiece opening, and its distance should be about the same as for your eye. I could see Jupiter and Saturn in the camera viewfinder so I knew I had it right. I set the camera to fully automatic shooting with voice command activation (to avoid vibrations from touching the smartphone). 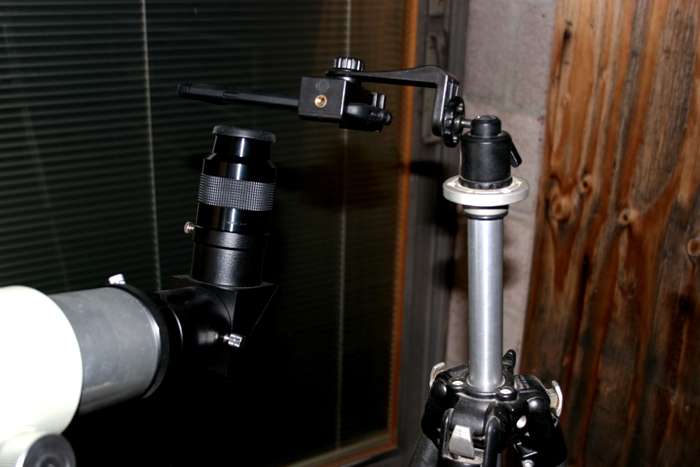 My first attempt showed Jupiter, four of its moons (small in-line dots), and Saturn with its rings blurred into the disc of the planet. As you can see, the focus is slightly off, and both planets are overexposed showing little detail. If you look closely you’ll see a small dot just to the right of Saturn. That’s Titan, Saturn’s largest moon. Not bad for a first attempt at afocal astrophotography, but not good either. 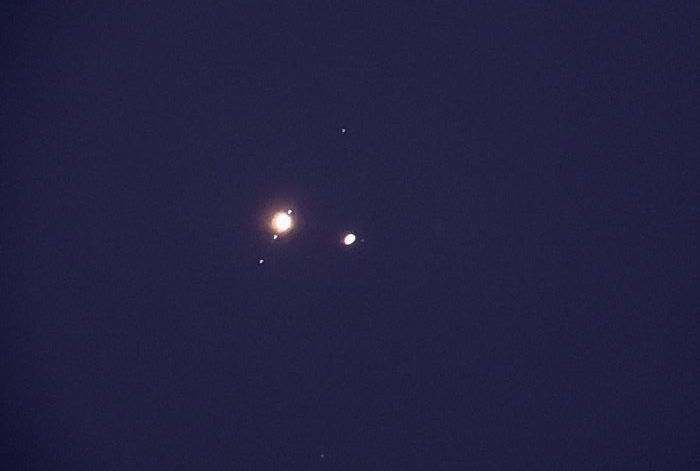 I should point out that the telescope was tracking Jupiter and Saturn with its motorized drive and doing a good job of keeping them centered in the view. But that means I had to keep moving the tripod so the camera would remain over the moving eyepiece. Fortunately, the planets were bright enough for the camera to select a 1/4″ shutter speed so motion blur wasn’t an issue.

Unfortunately, the camera selected f/1.5 for the aperture and ISO 1250, probably overcompensating for the vast majority of dark pixels. Hence the overexposure. My smartphone is a Galaxy S9, and the camera does have a “full manual” mode where the exposure could be corrected, but this first experiment was just to learn how well “full auto” would work.

The following evening I switched out the telescope eyepiece for one that has about 30% more magnification. Motion blur is still minimal, but now the focus problem is more severe. Fact is, it’s very difficult to maintain a good focus when you have to keep repositioning the camera. As before, there’s also still an overexposure problem. Camera-selected settings on full auto were the same as the earlier shot. You can see Jupiter’s moons have moved over 24 hours, as expected. I have no idea what happened to Titan. 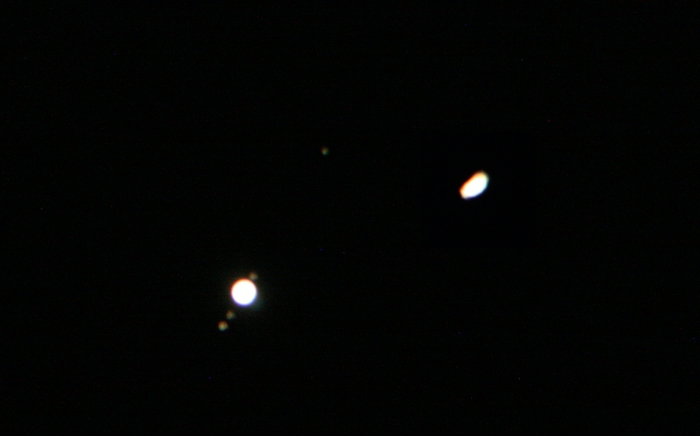 So here’s what I learned from this experiment:

Not sure yet if I’ll get that smartphone eyepiece adapter. As I said, the Canon 20D is preferable for most of my needs. Still, this was a fun experiment some may want to try on their own.

Note that I’ve added two new pages to the Sky Lights menu: Astrophotography showcases some of my better (non-afocal) astrophotos, along with tips on camera settings. Light Pollution explains why astronomy is difficult for people living in or near large cities, and suggests some solutions.