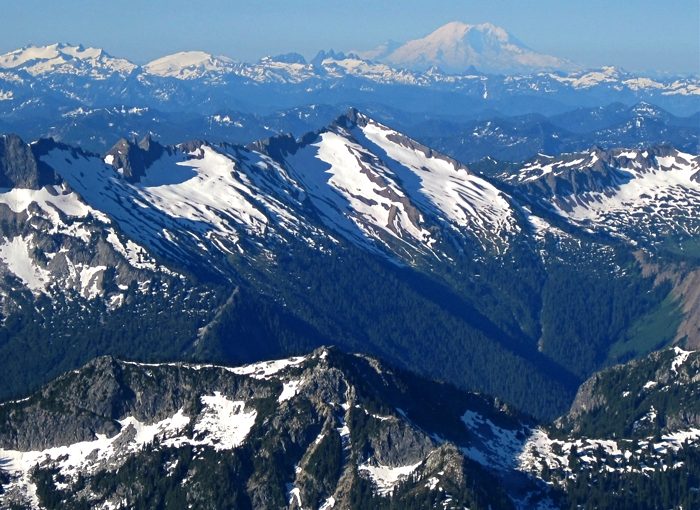 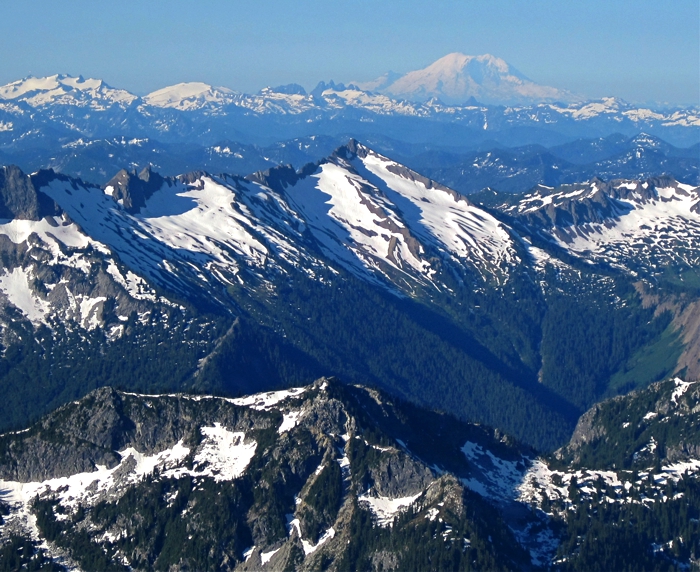 This photo is from Wikimedia Commons, courtesy of Nate B. It shows Whittier Peak (center) as seen from Clark Mountain in the state of Washington. Their altitudes are 2219 m and 2622 m respectively. The sightline here is about 13 km. But if you look closely, you can see a more distant peak through the haze. According to reader Carolyn Crockett (see comments below) that tallest peak in the distance is Mt. Rainier (4037 m) at a distance of 145 km.

After last week’s post several readers asked: What’s the longest sightline possible on Earth? For a 6 ft tall person standing on an ocean beach, or in the Great Plains, the horizon is a mere 5 km away. But when you get into the mountains, far longer sightlines are possible.

Last week I explained how I could see Sunset Point, elevation 998 m, some 30 km north of my location. I’m at 667 m, and there’s no obstructing mountains between here and Sunset Point, so I do have a clear line of sight — when the air is clear.

But if Sunset Point’s elevation were around 120 m lower, it would be hidden by the curvature of the Earth. Clearly, when looking for the Earth’s longest sightline, it’s going to be between two tall mountains. Turns out searching for these longest sightlines is a “thing” on Google Earth Pro. Check out this article: 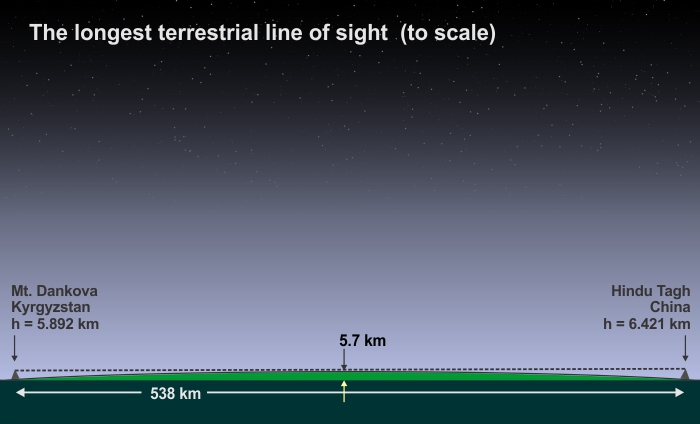 Using this handy Earth curvature calculator I found that over 269 km (half of 538 km), the Earth curves downward by 5.7 km. With both peaks higher than 5.7 km the sightline is geometrically possible. But seeing that far, even through clear air, is made difficult by atmospheric extinction. Nobody has to date gotten a photo that shows Mt. Dankova from Hindu Tagh, or vice versa.

However, atmospheric refraction can partly offset this by allowing “sightlines” to curve around the Earth. This can happen when the path of light is turned downward by temperature or density inversions. See my post about superior mirages for more on that. And though a superior mirage can be photographed, one could argue this hedges on the definition of “maximum sightline”.

I don’t know if a longer sightline than that between Mt. Dankova and Hindu Tagh exists anywhere on Earth, but if it’s out there some Google Earth aficionado will find it. If you decide to join the hunt, just remember that Google Earth doesn’t correct for Earth curvature in its elevation profiles. You have to do that manually.

What Mountain Is That?
Lakeshore Icicles