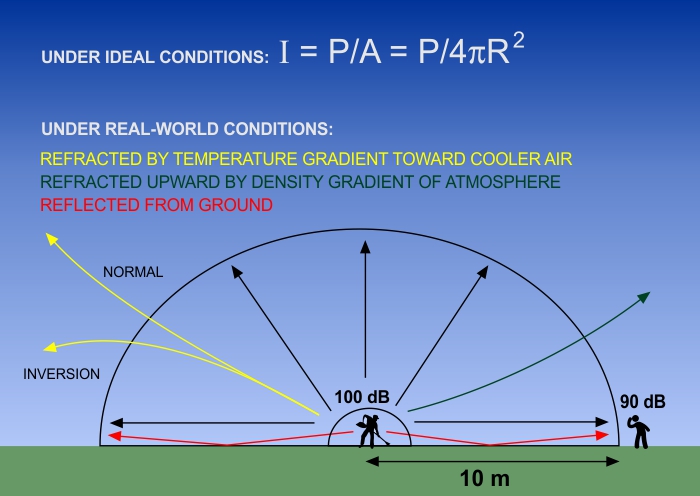 Question: My wife and I were taking a walk last night and were surprised to hear the sound of a leaf blower being used by a neighbor down the road. We live in a fairly quiet area, so when he’s running this gas-powered machine we can usually hear it if we’re outside. But it was a lot louder than usual this time. My wife observed that the wind was blowing from the direction of his yard, so it made us wonder if sound can be “carried” by the wind over longer distances than normal? — J&AS, Neshkoro, WI

Answer: The short answer is yes. But to really understand how this works we’ll need to talk about how sound waves propagate through air. There’s a whole branch of physics that deals with this — acoustics.

All waves experience refraction when they encounter a change in the medium’s physical properties (temperature, density, pressure, humidity, etc.). These changes affect the speed of the wave and cause it to veer toward regions in which the wave speed is slower. A nice explanation for why that happens can be found here.

The result is shown in the top graphic. In the real world, sounds waves don’t expand spherically into a perfectly uniform medium, as the sound intensity formula assumes. Things get messy even in a flat open field on a day with no wind. As shown in the graphic:

In the real world it’s even messier. Add houses and foliage and hills along the path of sound propagation, and much of the sound will be absorbed or scattered. None of the following calculations account for these effects.

Now let’s talk about leaf blowers. Sound intensity (I) can be measured in units of decibels (dB) or acoustic power (W/cm2), where the base of the scale is the threshold of human hearing: 0 dB = 1×10-16 W/cm2. We’ll be using these two equations to convert back and forth:

A leaf blower at 100 cm distance (typical for the operator’s ear) produces a sound intensity level of: I = 100 dB = 0.00001 W/cm2. From that, we can calculate the point source acoustic power of the blower as:

In reality, the observer 10 m away would only rarely hear 90 dB. The equations assume ideal conditions, and a real-world observer would most often hear less than 90 dB. But under certain environmental conditions, such as temperature inversions and hard surface reflections, the level could exceed 90 dB.

Here’s a good example that shows the real-world limitations of these equations. Let’s calculate how far the leaf blower’s sound would have to travel before reaching 0 dB (where you could no longer hear it):

Sure, leaf blowers can be heard from annoyingly long distances, but 317 km seems a bit far, yet that’s what the equations predict. So now, with all those caveats about how the perceived loudness of a leaf blower depends on environmental factors, we can answer your question about the effect of wind.

Assuming ideal conditions, at a distance of 1 km, a 100 dB leaf blower would be attenuated to 50 dB (about the sound level of a quiet restaurant). If your local environment is noisier than 50 dB you would not hear the leaf blower. Now let’s say there’s a 20 kph (5.6 m/s) wind coming from the blower’s direction toward you …

The graphic below shows how the moving parcel of air (dotted line) carries the expanding sound wave toward the observer. In the time it takes the parcel to be “filled” with the sound, it will carry the 50 dB threshold of hearing region 16 meters to the right — and you will hear the leaf blower. Without the wind, at a distance of 1.016 km, the sound would be attenuated to 49.87 dB and you would not hear it. 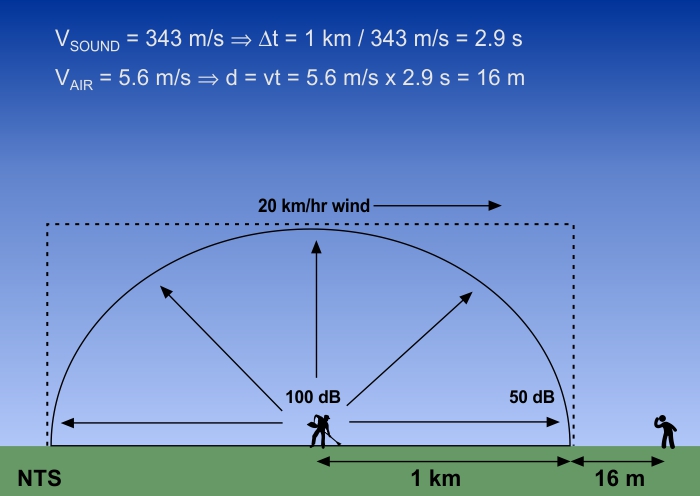 Of course, this works in the other direction too. Depending on wind direction, sounds you normally hear may be inaudible. The drone of traffic on I-17, located 1.3 km west of my home, is around 40 dB on a calm day. With an east wind over 20 kph the traffic is inaudible. So there’s no question wind can have an effect on the range of sound, but other effects discussed earlier usually predominate. So what you and your wife heard was at least partly due to the wind, but given the time of day I suspect a temperature inversion may have also contributed.

This was a fascinating question to research. If you want to learn about additional factors that enhance sound refraction, here’s a source I found useful: Wind and Temperature Effects on Sound Propagation.

And here’s an interesting scientific paper investigating how the sound of a church bell depends on the observer’s location as well as the wind: The wind effect on sound propagation over urban areas.