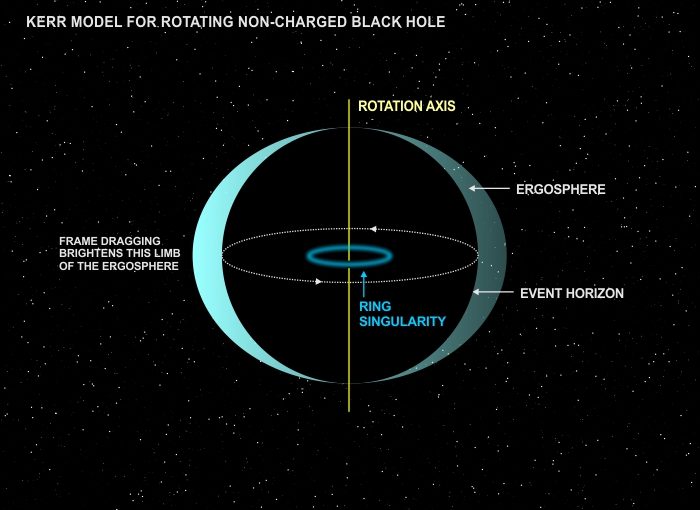 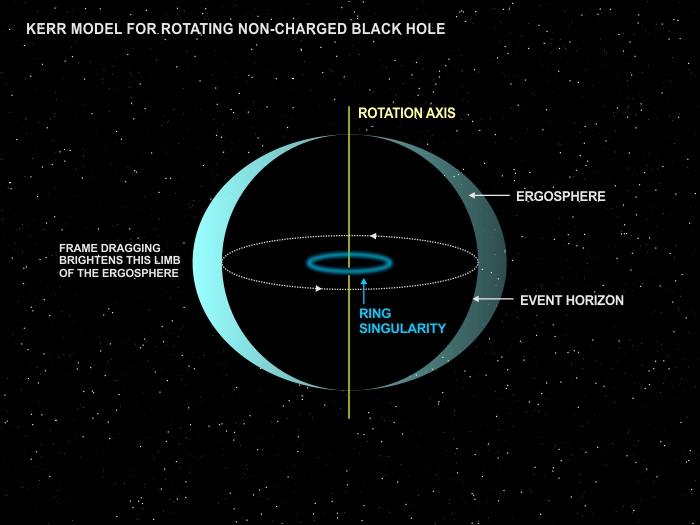 Question: I understand that black holes have a certain spin. What determines the direction of spin? And what is actually spinning? I assume it’s not the singularity, since a point can’t spin. Or is the event horizon spinning? Or maybe it’s the space around the black hole spinning?  — Julian Fox, UK

Answer: If a black hole is NOT rotating then the singularity may be a point. I say “may” because there could be some as yet unknown quantum effect that prevents the collapse to a mathematical point. It might instead become a fuzzy sphere of quarks and gluons. A non-rotating black hole is described by the Schwarzschild metric, which was derived from Einstein’s general relativity.

If a black hole IS rotating, it would be described by the Kerr metric. In this case the singularity is a one-dimensional ring (or a fuzzy torus of quarks and gluons) in a plane perpendicular to the rotation axis. And that ring is what’s spinning. Physicists believe that most black holes DO rotate, since they form from collapsing stars and, based on our current theory of how stars form, all stars rotate.

My graphic shows the Kerr model for a rotating black hole. I’ve left out a few details that aren’t really relevant to your questions. Interestingly, the first real image of a black hole shows brightening on one limb of the ergosphere as predicted by the Kerr model. If you missed that groundbreaking discovery by the Event Horizon Telescope (EHT) check out my April 15, 2019 post.

where “L” is the angular momentum in units of kg⋅m2/s, “I” is the moment of inertia (a function of mass distribution) in units of kg⋅m2, and “ω” is the speed of rotation in radians per second. For a spherical object:

where “m” is the mass in kilograms, and “R” is the radius in meters. This formula assumes uniform density, which is not the case for a star, but it’s accurate enough for our purposes.

Now let’s imagine that (for whatever reason) the Sun shrinks to half its current size while not losing any mass. For a sphere, the moment of inertia depends on the square of the radius, so the Sun’s rotation speed would increase by a factor of 4 and reduce the rotation period from 27 days to 6.75 days. If the Sun were to shrink to the size of a neutron star (40 km diameter) the rotation period would be on the order of 10 milliseconds. This means a point on its surface (at the equator) would be moving with a speed of:

which is just fine with astrophysicists. But if we extend this line of reasoning to a radius of 4 km, then a point on its equator would be moving at 3×108 m/s — the speed of light. Astrophysicists would not be fine with that. Interestingly, well before we get to 4 km, the spinning mass collapses.

The collapse of a star is ultimately resisted by what is called neutron degeneracy pressure. That’s what holds a neutron star stable against the force of gravity. But if the mass of a star is greater than around three times the mass of the Sun, gravity overwhelms the neutron degeneracy pressure and the star collapses into a black hole. It’s mass is now distributed in a 1-dimensional ring called a Kerr singularity. This ring has mass, and it rotates near the speed of light, so it carries most of the star’s original angular momentum.

Nobody really knows what happens to matter at a point or ring singularity, but there’s a strong argument for it becoming a fuzzy plasma. True singularities, like a zero-dimensional point or one-dimensional ring, require division by zero in the model’s equations, resulting in infinite density. Fuzzy plasmas do not. Physicists sometimes quip that “This is why God made it so you can’t divide by zero.”