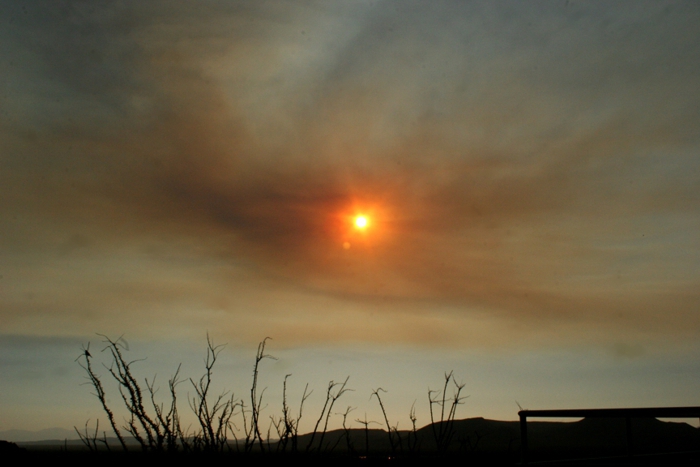 This is the Sun setting, of course, but its appearance suggested the title. And after all, the Sun is a star. We’ve had a lot of sunsets colored by wildfires lately. You’ve seen some of them in recent posts. In this case the fire was on Crown King, a mountain only 50 miles away. Winds carried the smoke in my direction and partly obscured the Sun behind a dense brownish plume. So why does it look like a 6-pointed star?

The smoke was thick enough to allow aiming my camera directly at the Sun. Warning: This can damage your camera if you don’t take precautions. The smoke itself was acting as a “neutral filter” — maybe ND 3–4. I also selected aperture priority at f/29, for which the camera selected an exposure of 1/1250 sec. But even with these safe settings, when you point a camera at a bright source of light two optical effects will always occur.

Light reflects off the boundaries between glass layers in the lens system. This always happens, but when the light is bright they can show up in the photo. You can see this in the top image as a smaller dimmer mini-Sun to the lower left of the real Sun. You can also see it below, where the camera lens is photographed under a strip LED lamp. They’re white LEDs, but in the reflections other colors appear because of interference of light waves — similar to what happens in an oil slick on water. 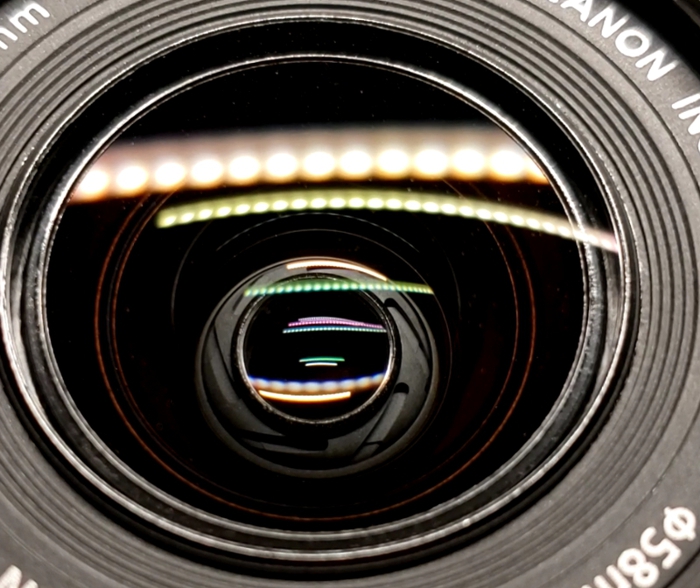 The second effect is caused by diffraction of light. You can see in the above image that the camera iris has six overlapping blades forming a nearly circular aperture. Geometrically, that overlap can’t be perfect. There will be six discontinuities evenly spaced around the aperture circumference — sections that are linear rather than circular. Light diffracts more strongly at discontinuities, and that’s what creates those six rays around the Sun that make it look like a “star”.

I should note the optical effects seen in my Starset photo were invisible to the eye. All I saw was a strongly reddened Sun behind the plume of smoke. The effects were only seen when I looked at the photo in my image editor. Photographers sometimes intentionally create these effects, as they can add visual highlights to the composition. In fact, most photo editing software includes a “starburst” filter to create that pattern from a selected bright source of light. In my photo the starburst was “real”, but pure serendipity.

Next Week in Sky Lights ⇒ Squinting At Bright Lights