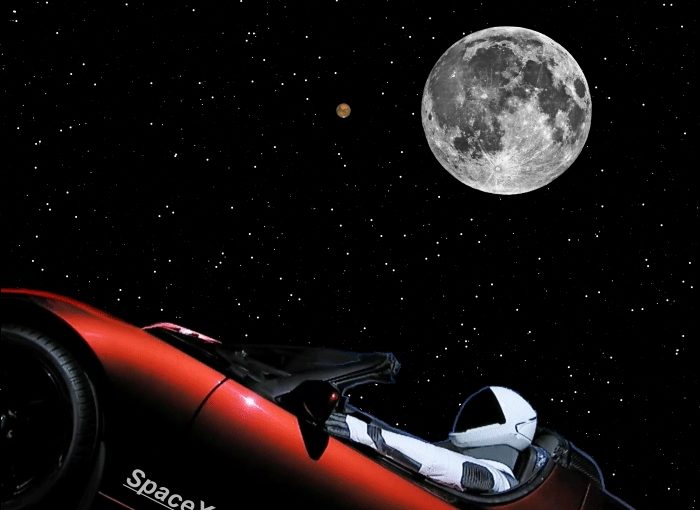 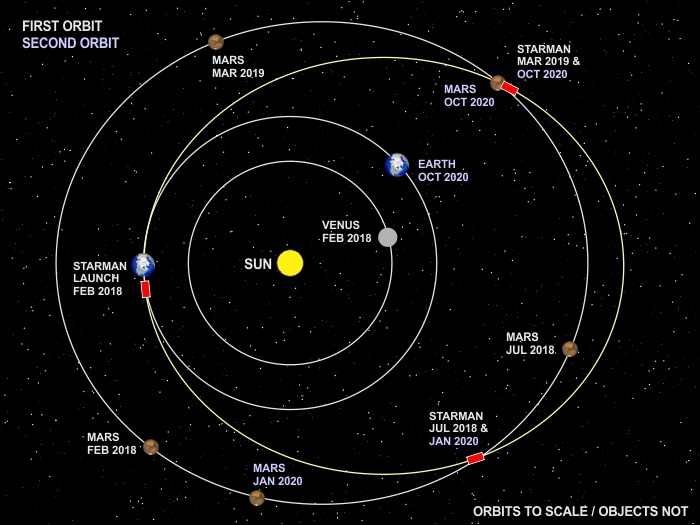 You may have missed this in the news, but on October 8th Starman’s red Tesla Roadster just made its first “closest approach” to Mars. Starman was launched on a SpaceX Falcon Heavy rocket in February 2018 as a test of the rocket’s Earth-to-Mars payload capacity. These capacity tests usually use concrete blocks as a dummy payload, but SpaceX CEO Elon Musk wanted something media-worthy.

Starman circles the sun once every 557 Earth days. It’s been 975 days since launch. So Starman is actually on his second lap. He crossed the orbit of Mars twice on his first lap, and again on his second lap, but it wasn’t until Oct 8 that Mars itself was anywhere even close.

The graphic shows how Starman’s orbit intersects the orbit of Mars twice, and is essentially tangent to Earth’s orbit. Depending on how close Mars and Earth are when Starman crosses, their gravity will alter Starman’s orbit. Eventually, in a few tens of millions of years, Starman will collide with one of those planets or, if decelerated by an encounter, could hit Venus. Starman could also be flung into a totally chaotic orbit.

As of today, Starman’s speed is around 3.9 kps (8000 mph) and he’s traveled nearly 2.1 billion km (1.3 billion miles). You can follow his progress in real-time at whereisroadster.com.

Media hyped this “closest approach” to Mars with simulated images making it appear that Starman got really close to Mars. Here’s just one egregious example:

Others simply reddened the color of Earth in Starman’s original departure photo to make it look more like Mars, but you can see from the surface features this is Earth:

In reality, Starman’s view as he buzzed by Mars would have been more like below. Earth’s Moon is included for scale. Sure, Mars is twice the size of our Moon, but at Starman’s 5 million mile “close approach” it’s 20 times farther away. As a result, Mars would appear about 1/10 the diameter of the Full Moon as seen from Earth. 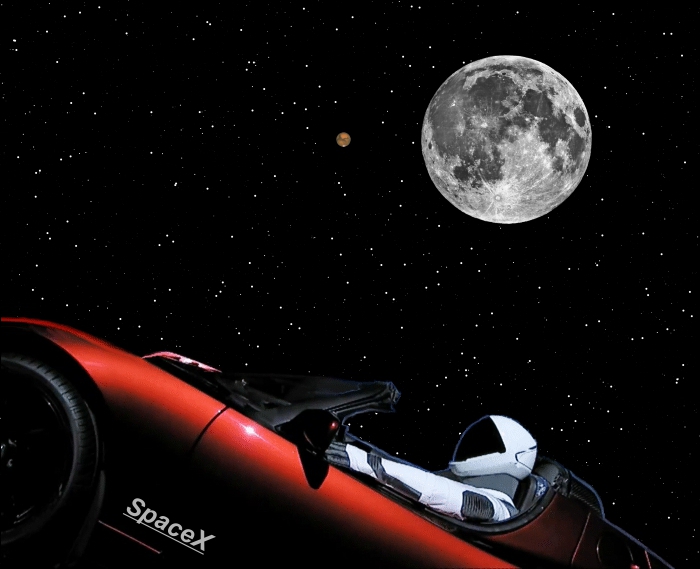 Not as exciting an image, to be sure, but more scientifically accurate. Starman will return to Mars in another 1.525 years for his next “close” approach. How close will that be? You can see the model itself and watch it run at: orbitsimulator.com. Play with the sliders — the model is best viewed from above.