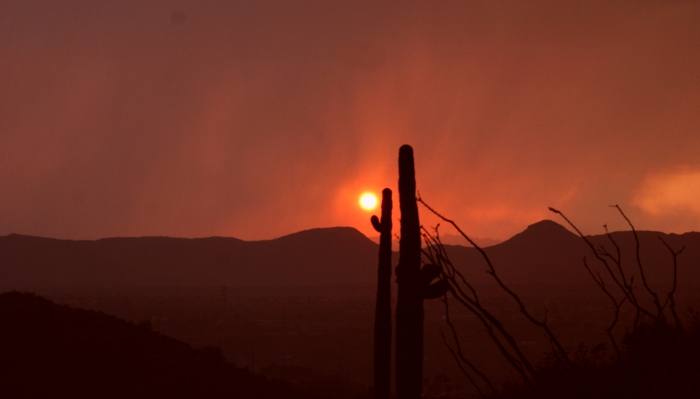 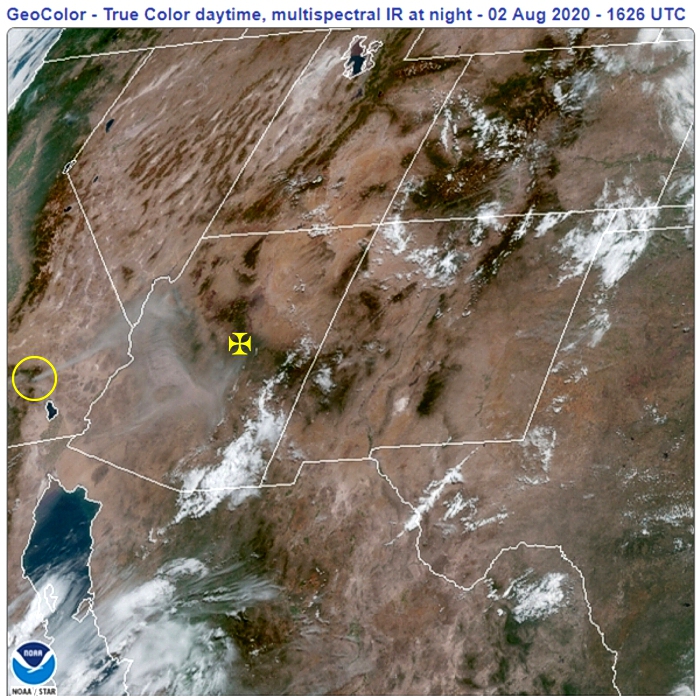 This is a GOES satellite image showing smoke from a California wildfire drifting into Arizona. The blaze was caused by an abandoned campfire. Dubbed the Apple Fire, it burned some 33,500 acres before it was contained. The yellow circle marks the fire burning just NW of the Salton Sea. X marks my location. The smoke plume meanders over 250 miles before a branch of the main flow reaches my location.

With all the devastation in the news it’s hard to imagine there could be anything good about wildfires (much less two things). So we’ll start with the fact that wildfires are a natural phenomenon in the West, and as a consequence, ecosystems have adapted to survive these events.

Even before settlers arrived, hundreds of wildfires were sparked by lightning every year. We can see the evidence in tree ring cores taken from ancient sequoias, some of which have been recording data for over 3000 years. Wildfires at regular intervals clear out the smaller brush and grass preventing an excessive accumulation that, if burned, would damage or kill the trees.

Wildfires also change the chemistry of the soil, adding nutrients that aid regrowth and nourish surviving foliage. Not surprisingly, over time several species grew to be dependent on wildfires for reproduction. Botanists call these species pyrophytes.

Of course, since the west was settled these fires have been suppressed, especially near populated areas. As a result, when fires do occur they are larger. This is why you’re starting to hear more about controlled burns, aka “prescribed burns.” Done properly the process can remove accumulated low growth fuel and also nurture pyrophytes.

Interestingly, indigenous peoples used controlled burns to manage wildfires centuries before European settlers arrived. Recently in California, the Mono tribe has been allowed to resume that practice on their lands after years of suppression.

The second “good thing” about wildfires is actually a mixed blessing. Smoke from the Apple Fire made it all the way to mid-Arizona before it dissipated. That evening I saw one of the reddest sunsets ever. Arizona sunsets are often spectacular because of the higher dust levels in desert air (see my post about Rayleigh scattering). But in this case it was more smoke than dust:

As I said, this was a mixed blessing. Sure, we saw an incredibly beautiful sunset. Alas, several Arizona communities had to issue air quality warnings. People with breathing problems were advised to stay indoors, and all residents were told to reduce activities that generate smog.

We have our own wildfire problems here in Arizona. Unfortunately, these days the wildfires are getting so large that their smoke crosses state lines.

Next Week in Sky Lights ⇒ The Colors of Lakes