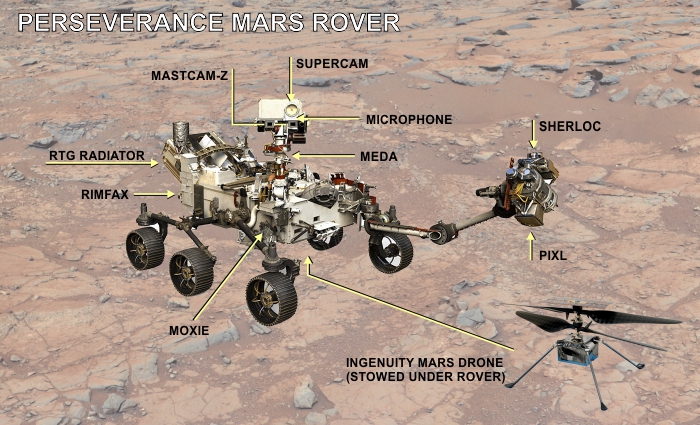 Perseverance and Ingenuity — it would be hard to devise more descriptive names for this Mars rover and its drone. Their mission on the Red Planet is, perhaps, the most ambitious to date. In this post I’ll highlight some of NASA’s ground-breaking experimental goals.

The graphic shows the main components and experiments of the mission. Perseverance will land in Jezero Crater near the western edge of a flat plain called Isidis Planitia, just north of the equator. If you follow that link, you’ll see the area shows heavy evidence of geologically-recent flowing water. If life exists on Mars this is a great place to investigate.

There’s a total of 23 cameras onboard for engineering, science, descent, and landing operations. That alone is a first, but it’s the panoply of new instruments that make this mission so exciting:

SUPERCAM: This instrument examines rocks and soil with a camera, laser, and spectrometers to identify organic compounds that would be evidence for past or present life on Mars. It can measure the chemical makeup of targets as small as a grain of rice from a distance of more than 7 meters. The laser can also blast dust from surfaces to expose the minerals beneath.

MICROPHONE: We will soon hear the sounds of Mars. Wind noise will be the most common, and if we’re lucky we might get to hear the howl of a dust devil (now known to be common on Mars). Beyond that, it’ll be the routine sounds of the rover’s wheels, electric motors, and mechanical arms, punctuated by the occasional “pop” of lasers evaporating rock.

At present, the only “audio” we have from Mars was digitally synthesized from barometric data obtained by NASA’s InSight Lander. The synthesis is based on the (approximate) correlation between wind speeds and pressure variations. Listen to it here:

MEDA (Mars Environmental Dynamics Analyzer): This is just a fancy name for their high-tech weather station. MEDA gathers all the usual meteorological data, as well as readings of electromagnetic and particulate radiation levels. It also records dust accumulation on an exposed horizontal surface.

SHERLOC (Scanning Habitable Environments with Raman and Luminescence for Organics and Chemicals): This multi-component instrument will use a UV laser, spectrometers, and the “Watson” camera — not an acronym, but an homage to the legendary detective’s assistant. It’s a high-resolution close-up camera, and includes a movable magnifying glass (another nod to Holmes). SHERLOC’s goal is to identify organic and mineral compounds that would be signatures of past or present life.

Further, SHERLOC holds samples of materials proposed for the pressurized suits needed to explore the martian surface. Watson will monitor them for signs of environmental degradation.

MASTCAM-Z: This is a pair of zoomable panoramic cameras that provide full-color stereo imaging the landscape around the rover, as well as atmospheric and night sky features. It can take 3D images and videos and pan 360° horizontal x 180° vertical. The powerful zoom (optical + digital) allows it to resolve objects as small as a housefly at a distance of 100 meters!

MOXIE (Mars Oxygen ISRU Experiment): “ISRU” (In-Situ Resource Utilization) is an acronym within an acronym. MOXIE will extract carbon dioxide from the atmosphere and output carbon monoxide and molecular oxygen via the catalyzed reaction: 2CO2 → 2CO + O2. It will produce around 20 grams of O2 per hour. That’s not enough to be of any use, but it serves as a “proof of concept” for future larger-scale devices. Automated landers could use this process to harvest oxygen for fuel and breathing before any humans arrive, significantly reducing mission payloads.

RIMFAX (Radar Imager for Mars’ subsurFAce eXperiment): Using ground-penetrating radar, RIMFAX will be able to map geological structures up to 10 meters beneath the surface. If there’s any ice or water down there, RIMFAX will see it. Like MOXIE, one of its goals is ISRU — water is very expensive to haul from Earth.

RTG RADIATOR: This isn’t an ‘experiment” but it is a critical component of the rover. Perseverance uses an RTG as its power source, as did many other rovers. Unlike solar panels, RTGs don’t need sunlight and are less sensitive to dust buildup. However, they do need to release heat into the environment to function. That’s easy to do in space, but on the surface of Mars it requires additional radiator area. The coils circulate fluid between the RTG and radiator to increase heat flow.

SAMPLE RETURN: [not indicated in the graphic because it involves too many components] Perseverance will use core drills attached to its robotic arm to gather rock and soil samples, each the size of a piece of chalk. They’ll be deposited into a hermetically sealed cache inside the rover’s body. The cache will hold 30–40 samples with a total mass around 450 g (about a pound). At a location yet to be determined, that cache will be dropped from the belly of the rover for later pickup by a future robotic mission and subsequent return to Earth.

A sample return is the Holy Grail of Mars exploration. Scientists have been dreaming about it for decades. Conclusive proof of life on Mars (past or present) is much harder to establish using remote methods. The sample return will be done by a future mission, still in the design stages, and require a complex in-space transfer to the Earth-bound craft. If all goes as planned, we may have those samples by 2031.

INGENUITY: Stowed below the belly of the rover is Ingenuity, the first drone to fly on another planet. It won’t be flying that far, as it’s another “proof of concept”. Future missions will use drones to explore and sample areas unreachable by rovers. For more details, read my July 8, 2019 post Drones on Mars.

Perseverance is enroute now, launched on July 30, 2020, and scheduled for a landing February 18, 2021. Stand by for some exciting science.

Q&A: The Brightest Stars Are Not the Closest Stars
Why I Get My Weather From NWS
HOME