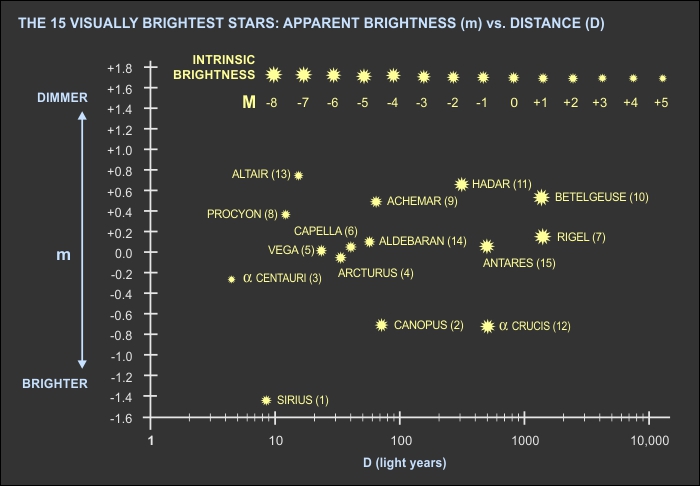 Question: I live in a rural area with really dark skies and I’ve enjoyed stargazing for many years. Don’t know much about astronomy though, so I was wondering: Are the brightest stars the closest stars? — CB, Cody, WY

Answer: It might seem like a logical assumption, but there are a LOT of exceptions to that “rule”. The rule would work if all stars had the same intrinsic brightness — what astronomers call absolute magnitude (M). As it turns out, the absolute magnitude of stars varies over a huge range.

The apparent brightness of a star (m) depends strongly on distance. When any light source moves farther away its brightness decreases as the inverse square of the distance. For example: Move a light source from 1 km to 3 km distance, and the light will appear (1/3)2 = 1/9 as bright.

Further, the human eye is more sensitive to some star colors than others, and there may be intervening dust or gas in space that blocks some of the star’s light. Apparent brightness also depends on the star’s position in the sky. Stars nearer the horizon will be dimmed by atmospheric extinction. Finally, depending on your proximity to a large metro area, light pollution can be worse in certain directions and lower the visual contrast.

The graphic plots the 15 apparently brightest stars in the night sky. Not all 15 can be seen from the Northern Hemisphere. They’re numbered sequentially from the brightest: Sirius (1). Stars are plotted on a graph of apparent brightness vs. distance. The horizontal axis is logarithmic to spread the stars over a wider range. The size of each star’s icon is proportional to its absolute magnitude. Take some time to scan that chart. Do you see any patterns?

It’s obvious the “brighter means closer” rule just doesn’t work. If that were the case, the stars would line up roughly along a diagonal running from lower-left to upper-right. In fact, around half the stars plotted violate that pattern. This lack of correlation makes sense when you consider the large range of absolute magnitudes found in stars.

Whereas apparent brightness can be measured directly, absolute magnitude, which is a function of size, temperature, and metallicity, must be calculated to correct for how far away that star is from Earth.

I only used 15 stars for my data in this post. If you’d like to download my chart of apparent and absolute brightness vs. distance for the brightest 25 stars in the sky you can get it here.

Next Week in Sky Lights ⇒ Perseverance and Ingenuity