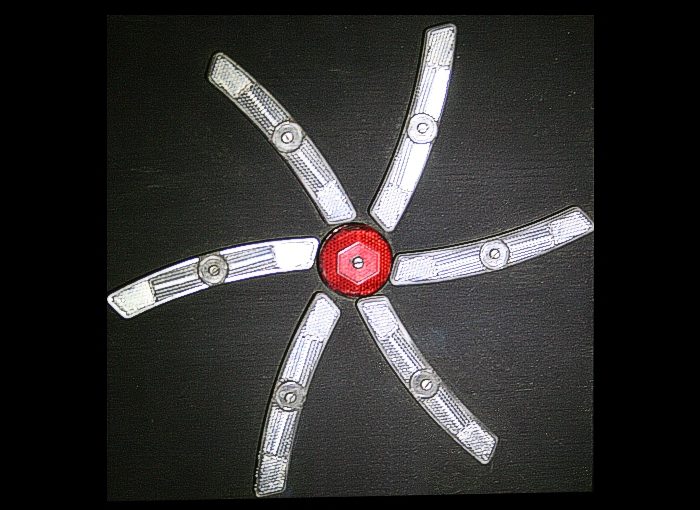 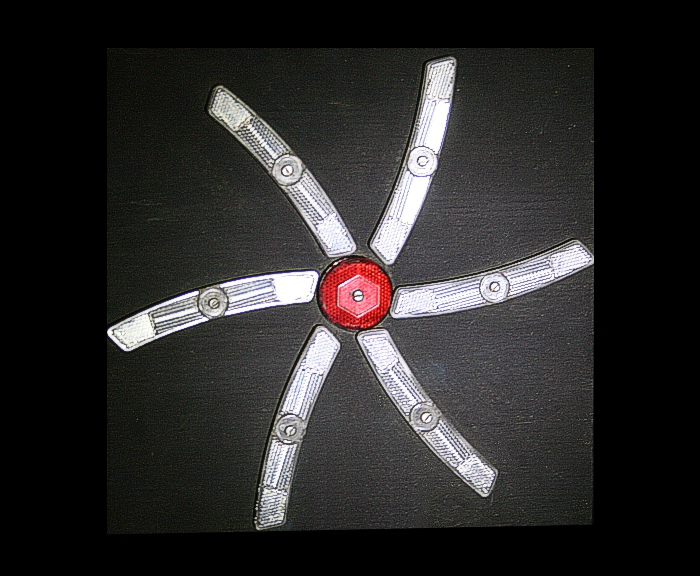 Question: I drove past this guy on a bicycle last night and his tail lights were so bright I figured they were electrically powered. Then as I started passing him the lights dimmed out so I knew they had to be reflectors. Made me wonder how those things actually work. Is there some kind of special mirror under the red plastic? — PH, Miami, FL

Answer: Not quite. If it were a simple flat mirror inside you’d see hardly any light — unless you were directly behind the bicycle instead of passing safely alongside. What is needed is a “mirror” that returns light to the driver’s eyes regardless of the angle between the vehicle headlights and reflector.

The omnidirectional behavior of bicycle reflectors comes from something called a retroreflector (aka “corner cube reflector”). The photo above shows an astronomy event sign I made using bicycle reflectors. Note how they “light up” when illuminated by a flashlight. Note also that the flashlight’s beam was aimed at 60° to the plane of the sign, as was the camera’s line of sight.

Retroreflectors have been used on bicycles and automobile tail lights for close to a hundred years. More recently they’ve been used for jogging apparel and backpacks. They’re also used for distance ranging by surveyors and astronomers. Unlike flat mirrors, retroreflectors will send impinging light straight back to its source regardless of what direction that light comes from.

Imagine you have a flat mirror 1 km away and perpendicular to your line of sight. If you looked at it through a telescope you’d have no trouble scanning back and forth and seeing yourself in the reflection. But if you tried to shine a flashlight on the mirror expecting to see the light reflected, alignment would have to be near perfect. With a retroreflector, all you need is hit it with any part of the beam (which spreads out over distance) and you’ll see the reflection.

Retroreflectors are based on the Law of Reflection: 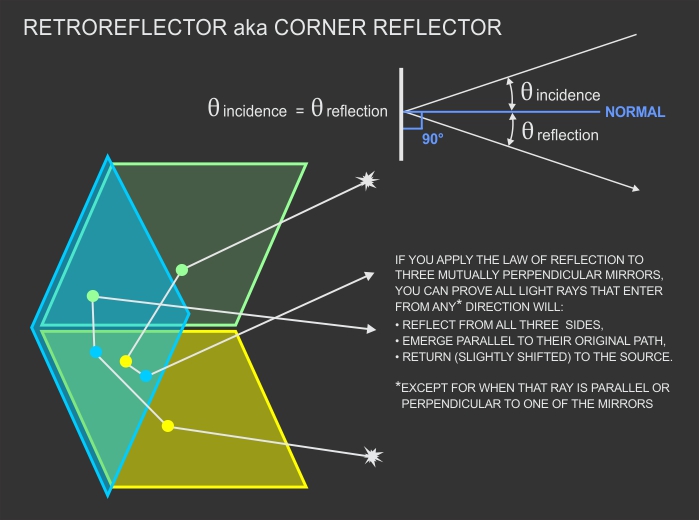 Bicycle reflectors contain hundreds of these tiny retroreflectors, each maybe 2-3 mm on a side. The following slideshow lets you see inside a dissected bicycle reflector. In slide 1 you can see the cubic structures stamped into the plastic, but it’s hard to know what’s what given the translucent material. In slide 2 it’s dusted with chalk that gathers in the depressions making the cubic facets visible. Slide 3 shows the reflector in operation — note how almost every corner cube facet is emitting light! In case you’re wondering, that “yellow” color is a distorted image of the light bulb filament. 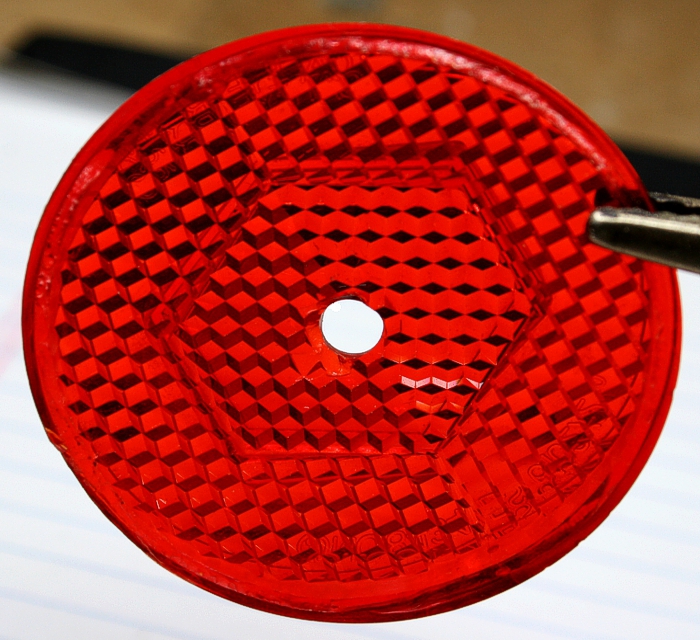 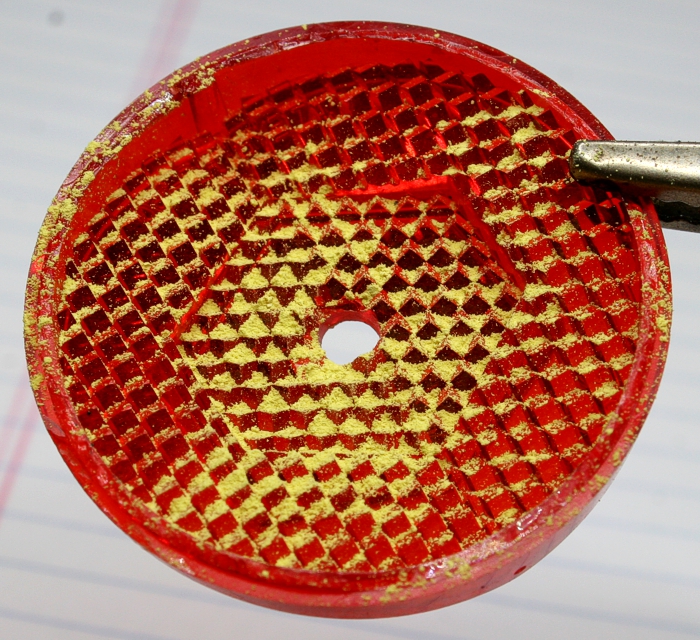 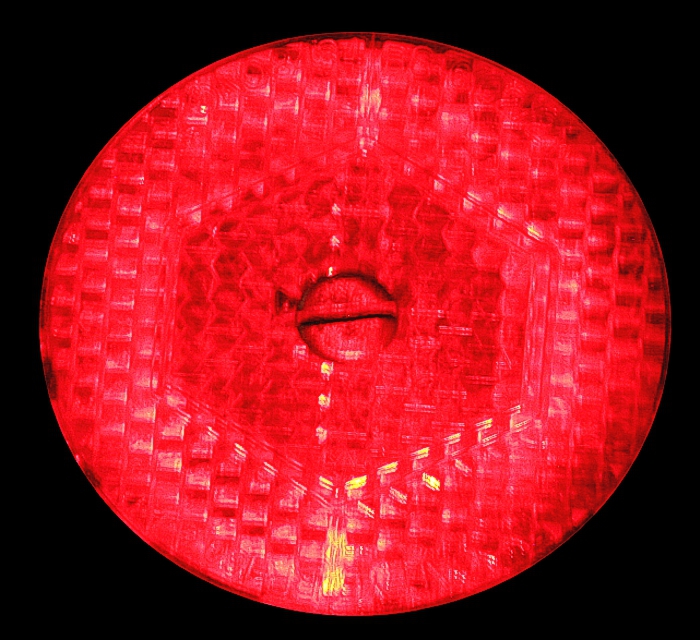 Retroreflectors work so well they were left on the Moon by astronauts in the Apollo 11, 14, and 15 missions. If you shine a bright laser at them from Earth, and time how long it takes for the reflection to return, you can easily calculate the distance to the Moon. These passive devices are still being used for that purpose, but they’ve accumulated dust over the years so reflectivity has decreased. See my May 5, 2014 post about for more about that.

Here’s a photo of the Apollo 15 retroreflector. The corner cubes are clearly visible. 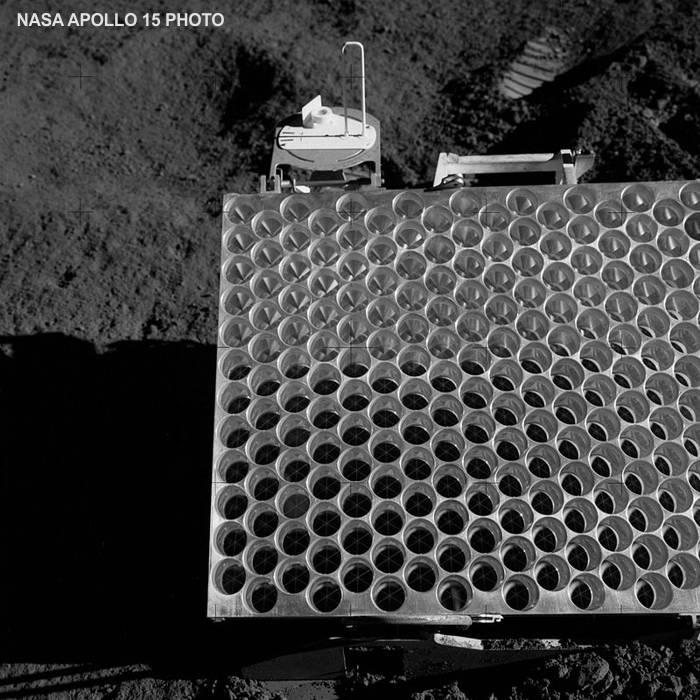 ISS Transits NEOWISE
Q&A: The Brightest Stars Are Not the Closest Stars
HOME