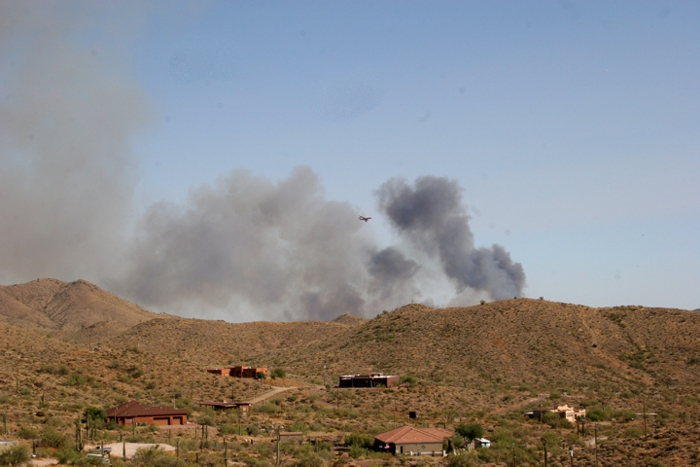 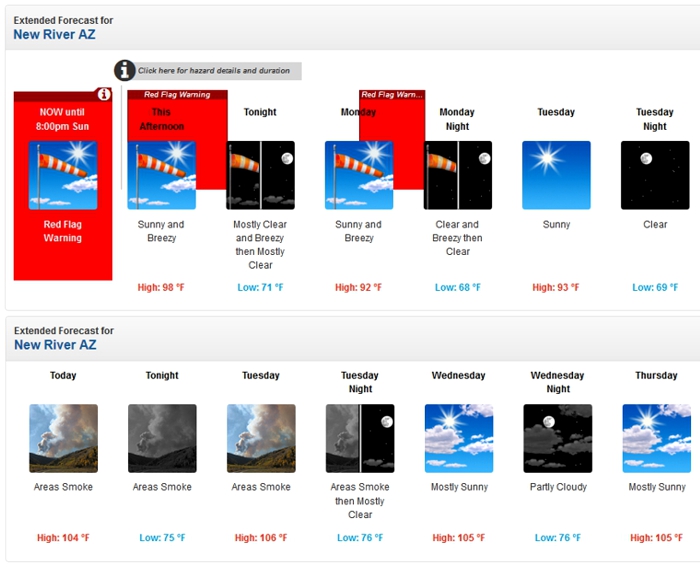 In July 2015, with little public fanfare, the NWS decided to update the weather icons used in their forecasts. Weather geeks like me noticed the change, and for weeks were entertained by the new artwork. By now, five years later, I thought I had surely seen them all. I was wrong. The above forecasts are from late June. They overlap in time, and by Monday the top forecast had morphed into the bottom forecast.

I’ve seen more than I wanted of those “Red Flag Warnings” over the years. They’re issued frequently during the dry summer season here in Arizona, especially after a wet spring. Dead brush and grass coupled with low humidity, high temperatures, and strong winds are a recipe for desert wildfires.

Wildfires happen for a variety of reasons. Lightning strikes and downed power lines are common causes. But according to the National Park Service 85% of wildfires are anthropogenic. They are started by carelessly discarded smoking materials, pyrotechnics, abandoned camp fires, and contact between tall grass and catalytic converters or mufflers on off-road vehicles. I hate to admit it, but Red Flag Warnings have become almost routine in our summer forecasts.

However, I had not seen those “Areas Smoke” icons before. They showed up in the Monday morning forecast. My first thought was there must be a new wildfire burning nearby. There were several burning around the state, but none close enough to see their smoke as more than a light haze. A quick walk around the yard verified that was still the case, so it was curious to see that new icon in the forecast.

Late Tuesday morning I went out on the deck for a quick break and saw this:

The scene was eerily evocative of the new NWS icon. I mean, everyone likes accurate weather forecasts, but I don’t like having them this accurate. If you look closely you can see an aircraft about to drop fire retardant on the blaze. It took three hours for emergency crews to extinguish this wildfire. Fortunately nobody was injured and no homes were damaged.

The fire never got closer than a couple miles, but it was hard to tell from here. It looked like it was burning just behind those hills ¼ mile south of us. Back in 1993 there was another wildfire that did top those hills. Aircraft were dropping retardant from an altitude below that of our yard. We captured some scenes with a (then high-tech) VHS camcorder. Since converted to DVD, then to MP4, that video is available for download here:

The video is 44 Mb (RT = 5:16) so it’ll take some time to download. With a VHS original and multiple conversions, audio and video are substandard. But if you’re looking for something to do during lockdown, you might want to check it out. Not many people have been that close to a wildfire.