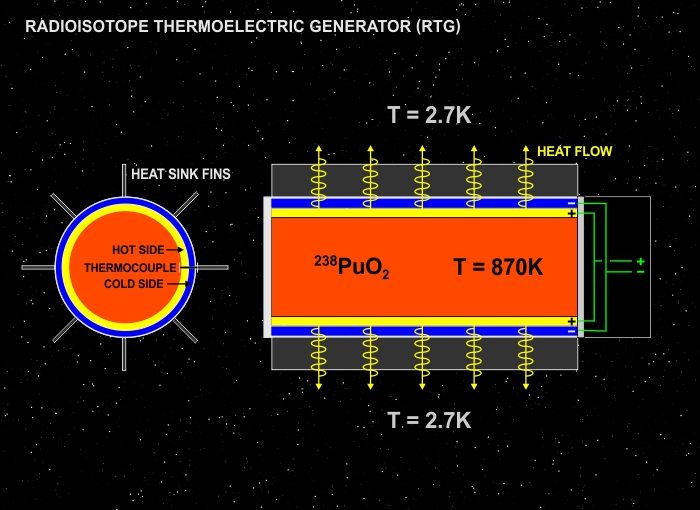 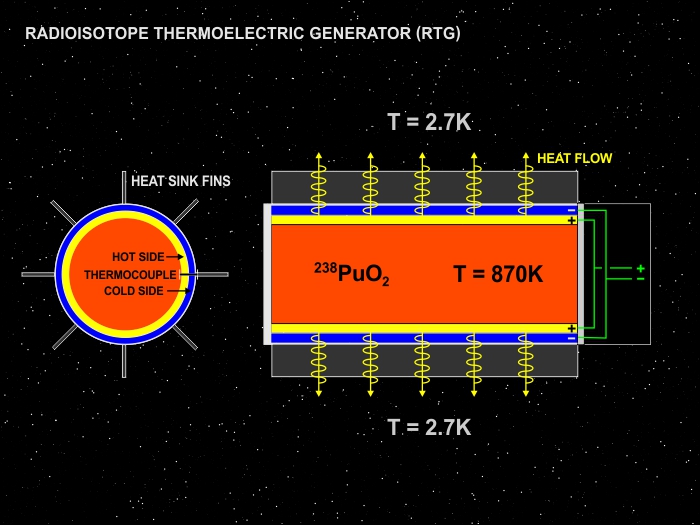 Question: After your last post I wanted to learn more about RTGs. I was curious what kind of battery could power New Horizons for 25-30 years. Wiki says it’s some kind of nuclear battery but I couldn’t follow much of their article. I’m only up to freshman science. How does an RTG work? — LM, Scottsdale, AZ

Answer: It is a kind of “battery” because it stores energy with no moving parts. Conventional batteries (C-Zn, Li-ion, alkaline, etc.) use chemical reactions to make electricity. RTGs use a thermionic process. It’s based on what’s known as the Seebeck Effect and requires only a temperature difference to make electricity.

RTGs generate electricity using a thermocouple (top graphic) made from two layers of dissimilar metals or semiconductors. When heat is applied to one layer, and cold to the other, valence electrons migrate from the hot side to the cold side. This creates a voltage difference that can power electrical devices.

The heat source powering this RTG is radioactive plutonium-238 dioxide (238PuO2) in the form of pellets (shown below). The pellets are 5 cm diameter and can be “stacked” to provide whatever power is required. New Horizons’ RTG carries 10 of these pellets with a total mass of 11 kg (24 lb). Because 238Pu has a half-life of 87.7 years, RTG power output decreases to 50% its original rating in that same time. The pellet is glowing red-hot from the energy released by radioactive decay. 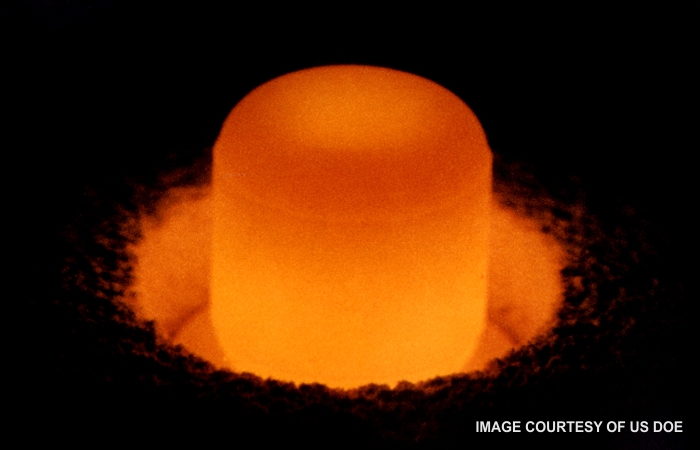 Here’s the formula for the nuclear decay reaction:

Every atom of 238Pu will spontaneously decay at some random time. For any specific atom, when that decay will happen is unpredictable. All you can say is that it has a 50% chance of decaying in 87.7 years. When it finally does decay, it emits an alpha particle (4He) and becomes an atom of uranium-234 (234U).

That alpha particle has a kinetic energy of 5.593 MeV (8.961×10−13 J). When it collides with the crystal lattice of plutonium dioxide its kinetic energy is converted into heat. There’s no real “throttle” on this reaction, like control rods in a commercial nuclear reactor. The speed of the reaction is set by the density and hardness of the crystal lattice, so once an RTG is assembled it’s immediately “full on”.

RTGs are used for all deep space missions. When you’re beyond the orbit of Mars, sunlight is too dim for photovoltaic power. RTGs have been in use since the ’60s powering satellites, experiments on the Moon, and remote earth-based military stations. And RTGs will most likely power the first human colonies on Mars.

Discussion of “Q&A: How RTGs Work”