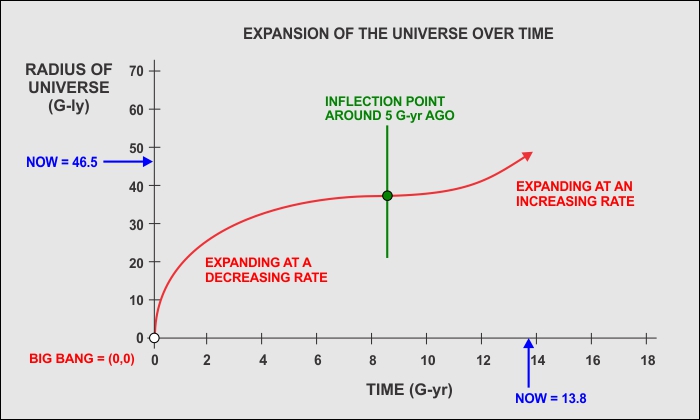 Question: I’ve been hearing about how the expansion of the Universe is speeding up because of something called “dark energy”. But that doesn’t make sense to me. Here’s my reasoning:
1. The most distant galaxies are traveling away from us the fastest, and
2. the farther into space we look, the farther back in time we’re seeing, so
3. the galaxies were traveling away from us faster in the past, therefore
4. the expansion of the universe must be slowing down.
What am I missing here. Does it have to do with the expansion of space itself? — Julian Fox, UK

Cosmologists estimate the accelerating expansion began around 4–5 billion years ago. At least that’s what initial data from Type 1a supernovae suggests. The graphic shows a plot of “size vs. age” for the Universe. There’s a horizontal inflection point where the deceleration became acceleration, but we don’t yet know if the radius was momentarily constant during that transition. Acceleration may have started while the Universe was still expanding.

Whatever the transition details, because of the initial rapid expansion, the radius of the Universe can be greater than its age multiplied by the speed of light. This is a key feature of current cosmological models.

13.4 G-yr is what’s called the light travel time from GN-z11. 32 G-ly is what’s known as the metric radial distance. This implies the light arriving now from GN-z11 traveled with a speed of:

The discrepancy arises because when the light now arriving from GN-z11 was emitted, GN-z11 was only 2.7 G-ly from Earth. The Universe has expanded by a factor of 12.1 since that light was emitted. By correcting for the expansion factor we can resolve this apparent contradiction.

Because empty space (with the galaxies embedded) can expand faster than the speed of light, we need to distinguish between metric radial distance (as measured by redshift), and distance inferred from light travel time. This distinction doesn’t apply to the 80 known galaxies in our Local Group like, say, Andromeda. Local Group galaxies are gravitational bound to each other, and so are comoving with the Milky Way. Their metric radial distance is (nearly) equal to the light travel time distance. Andromeda is 2.5 M-ly distant, and we see it as it was 2.5 M-yr ago. Not so with GN-z11.

At this point in cosmic evolution the accelerated expansion hasn’t been happening long enough to make much of a difference in what we see when we peer into deep space. The change in the expansion curve began gradually and is still in its early stage. If accelerated expansion continues, there will come a time when all distant galaxies (beyond our Local Group) will be redshifted out of view. But the farthest of them will still be moving the fastest.

Q&A: Meteor Impacts on the Moon
What Causes High and Low Pressure Systems