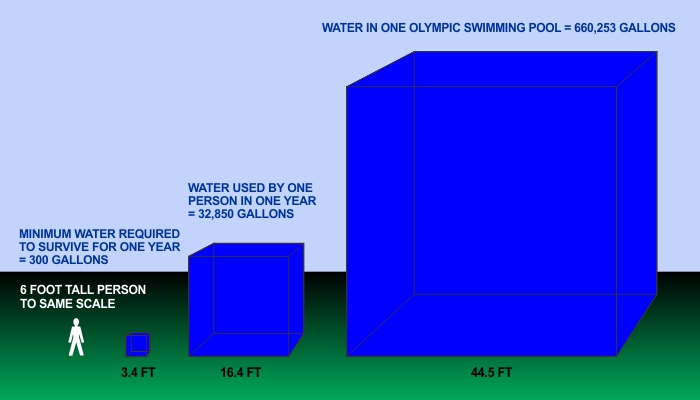 Over the last year or so I’ve been hearing a lot of things compared to “Olympic swimming pools”. Not sure why that is, but here’s some examples of recent headlines and factoids:

Maybe the writers think that’s an easier way to put big numbers into perspective. Many readers may not be comfortable with cubic meters or cubic feet and scientific notation. So I created this week’s graphic to help visualize “one Olympic swimming pool” and relate it to some more-tangible quantities.

Next time you hear something like “Between 2002 and 2016, Greenland shed approximately 280 gigatons of ice per year” you’ll be able to put that into better perspective. One gigaton = 400,000 Olympic swimming pools, so 280 gigatons would be 112 million of those large blue cubes. Per year.

FYI, if I tried to fit a one gigaton cube into the graphic it would need an edge length of 3281 ft. Drawn to relative scale, the other cubes would pretty much shrink out of sight. 3281 ft is 74X the edge length of the largest blue cube.

Next Week in Sky Lights ⇒ What Causes Wind