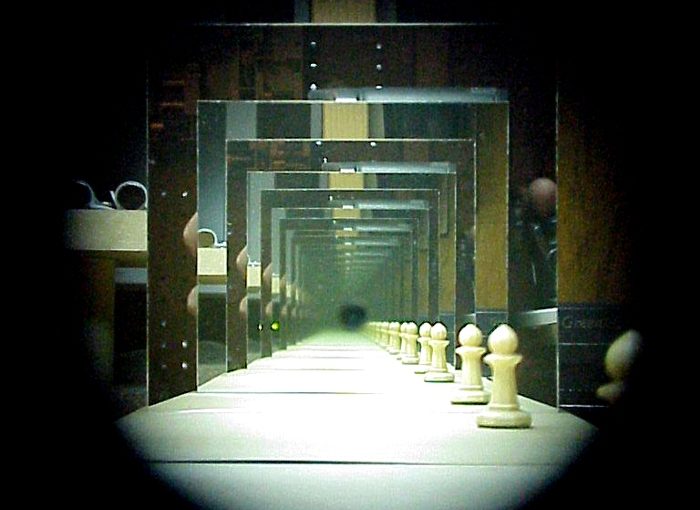 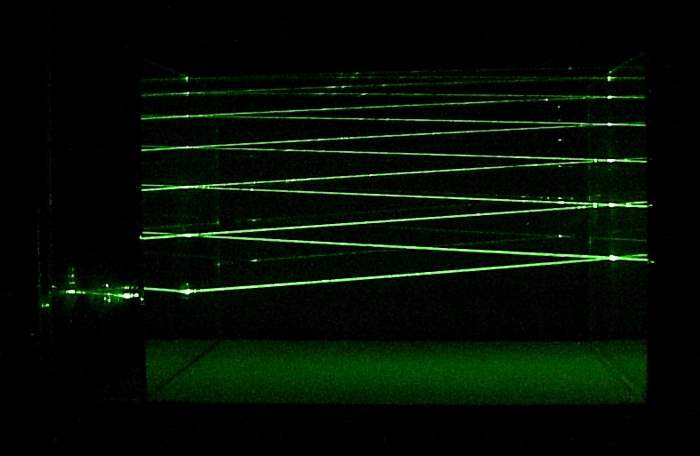 Question: Is it possible to trap a laser beam between two mirrors so it would just bounce back and forth forever? — JQ, Tampa, FL

Answer: Not forever, but for a short time yes. The problem is: No mirror reflects 100% of the light that strikes it. Typical mirrors reflect around 80-90% of the light, and high quality mirrors (like those used in telescopes) can reflect up to 99.99%. Light that isn’t reflected is absorbed by the mirror and converted to heat, so eventually the laser beam would “run out of light” and stop bouncing.

SAFETY NOTE: Lasers and mirrors are a dangerous combination. Even reflected laser light can damage your vision. Do not attempt to duplicate what follows without adult supervision! And if you are an adult, be careful!

The photo shows two common mirrors aligned parallel. A green laser pointer is projected through a hole near the bottom of the left mirror. I scattered some chalk dust into the air to make the beam more visible. The beam enters at lower left and was aimed slightly upward. You can see at least 12 reflections. Notice how, after each reflection, the beam loses some of its brightness. The beam could have been tracked longer but I ran out of mirror. I estimate that, with tall enough mirrors, we could have followed the beam for maybe 100 reflections before all the light was absorbed.

You might object that, with a fixed percentage being absorbed at each reflection, the beam of light would never be reduced to zero. Mathematically, that is true. However, some light is also scattered by chalk (and air) particles, effectively subtracting light from the beam. Even in a vacuum, the mirror itself would scatter light. A mirror might seem smooth to the eye, but its surface is  “rough” at the microscopic level.

You’ve probably noticed, say in a fitting room, that when two mirrors face each other and you stand between them, you can see what some call the “infinity mirror” effect — multiple images of yourself stretch off into the “distance”. Since the two mirrors are never perfectly parallel, the images usually curve out of view long before they fade away completely.

So using the same two mirrors from the first photo, I aligned them as close to parallel as I could and put a single chess piece between them. Then I aimed the camera through the same hole I used for the laser beam. Here’s the photo I got: 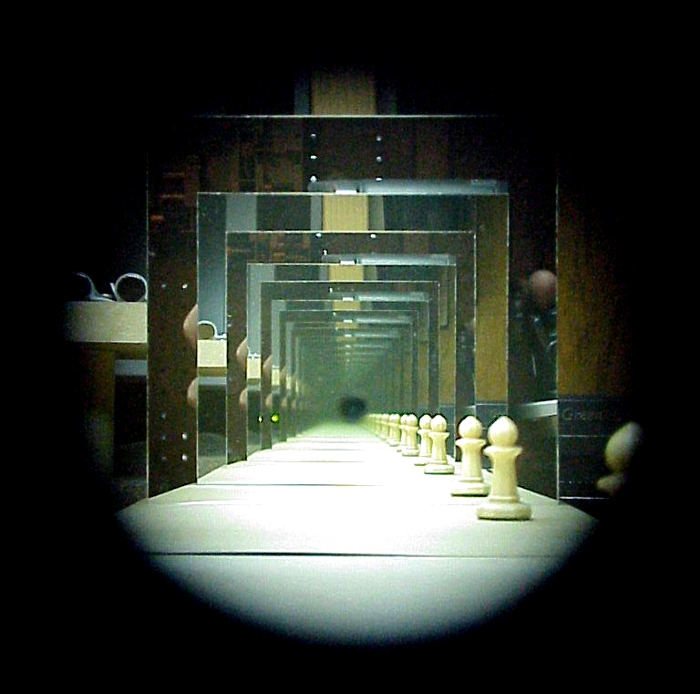 The parallel alignment was very good, as you can see. There’s a slight downward curve to the images but not much. I can count around 15 chess pieces before they fade out. That dark spot in the center is the hole I aimed the camera through.

Interestingly, lasers utilize a pair of extremely high quality mirrors aligned about as parallel as technology allows. The light emitted by a laser spends a short time bouncing between those mirrors as it builds up intensity. One of the mirrors is slightly less reflective than the other, and that’s where the beam emerges.

Next Week in Sky Lights ⇒ One Olympic Swimming Pool