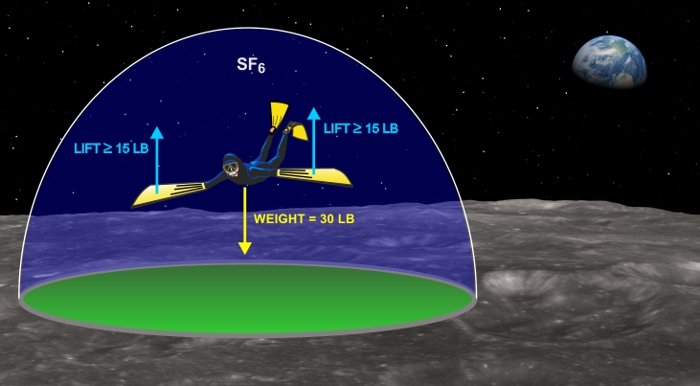 Question: I had a dream the other night where I was flying just by flapping my arms. They say that’s a pretty common dream. Obviously that’s impossible here on Earth, but it made me wonder if maybe it was possible on other planets? — KE, Smallville, KS

Answer: Yes it is possible, but probably not in the manner you think. It would be difficult to fly using just your arms, but with the right equipment in the right atmosphere on the right planet, it could be done. So let’s take a “flight of fancy” by making some assumptions and see where the science leads us. This should be fun …

Flight of any type requires a lift force greater than your weight. Lift can be provided by several means, including airfoils (hang gliding), buoyancy (hot air balloon), or thrust (rocket packs, turbines, propellers). Flapping your arms falls into the “thrust” category.

Let’s say you can flap your arms really fast, like a hummingbird, feathering the palms of your hands on the upstroke. On the downstroke, each hand displaces a column of air with a cross-section of around 0.15 m2, and a height of around 1 m (your “stroke length”). That’s 0.15 m3 of air, which has a mass of:

Thrust (F) can be calculated using the formula: F = Δp / Δt  (the rate of change of momentum for the air thrown downward). We’ll assume a 150 pound person, so they require a thrust of 670 N to lift off:

And since f = 1/Δt that means you’d need to flap your arms 43 times per second (with perfectly timed feathering) where one “flap” = one up and down movement of both arms. Hummingbirds flap their wings at rates of 20 to 80 times per second, but the wing of a hummingbird has a mass of less than a gram.

By comparison, a human arm has a mass of around 3.5 kg. Because F = ma the force required to flap a human arm 43 times per second would be large enough to rip ligaments and break arm bones. I leave that calculation as an exercise for the curious reader.

So let’s try another tack. Using swimming flippers rather than just cupped hands …

To put things into perspective, here’s some data from professional athlete performance studies:

The upper sustainable limit of a diver’s fin-kick thrust force using a stationary-swimming ergometer was shown to be 64 newtons (14 lb). The maximum thrust averaged over 20 seconds against a strain gauge has been measured as high as 192 newtons (43 lb).*

These measurements were done on professional swimmers. Your mileage may vary. The top graphic shows my hypothetical scenario.

Let’s first relocate to the Moon. Someone who weighs 180 lb on Earth will now weigh only 30 lb. This reduces the required thrust by a factor of six.

Next we’ll build a dome and fill it with sulfur hexafluoride (SF6). This gas has a density of 6.17 kg/m3. It’s widely available and non-toxic to humans. You’d still need oxygen to breathe, hence the mouthpiece on the flyer. The density of SF6 would boost the thrust from 0.06 lb to 0.30 lb. Still far short of takeoff.

If you don’t mind the 75°C (167°F) temperature and slight radioactivity, uranium hexachloride (UCl6) with depleted uranium and the chlorine isotope 37Cl has a density of 18.5 kg/m3. This would get our thrust up to 0.90 lb — about 1/30 the needed thrust. To fly, we’ll need to go somewhere beyond the Moon.

If the minor planet is made of rock with an average density of 5000 kg/m3, then we need one with a radius of:

That’s pretty close to asteroid Bennu (R= 245 m), so if you want to fly by flapping your flippered arms (and feet) Bennu is at least one place you could do it. 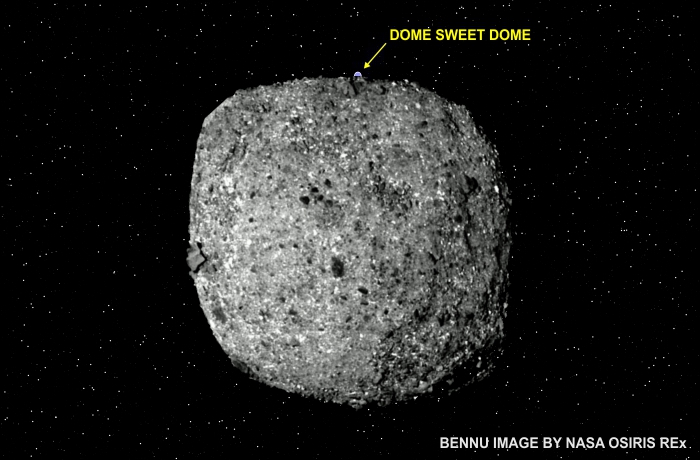 This graphic is strangely evocative of B612, “home planet” of The Little Prince. B612 appeared to have a radius about equal to the height of the Little Prince, say around 1.5 meters. If we assume the typical rock density for his world, B612 would have a mass of 70,000 kg and a surface gravity of only 0.000002 g. No “flapping” would be required. The escape velocity would low enough that the Prince could simply jump into orbit or propel himself off into space, never to return.

Inexplicably, B612 had an atmosphere despite its weak gravity so no dome would be required. Or flippers. Flapping his arms alone would propel him aloft. Just like we do in our dreams.

Discussion of “Q&A: Flapping Your Arms and Flying”