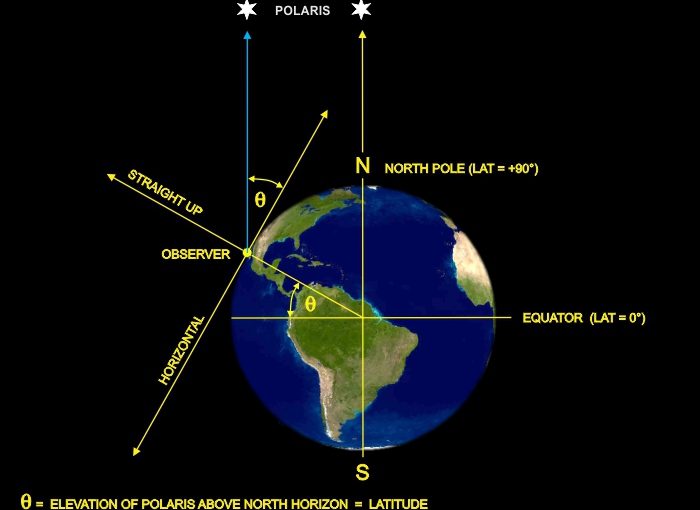 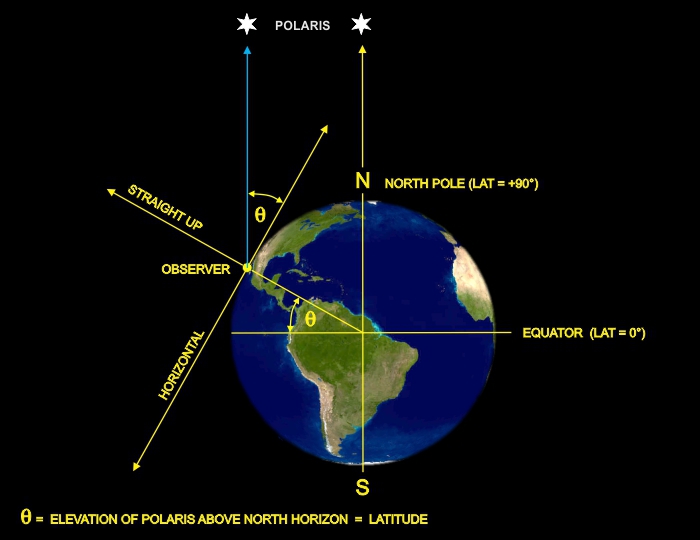 Question: I’m writing a report for history class about how early explorers knew where they were in terms of latitude and longitude. I’m pretty sure I understand the latitude part where they used the North Star. The longitude is a lot more complicated. I read something about using the moons of Jupiter to find the longitude, but couldn’t follow the explanation. A little help please? — WT, Fairbanks, AK

Answer: I already had the above latitude graphic from another project so I included it with my answer. Yes, latitude is the easy part. This method was known and used centuries before the Age of Discovery. The graphic shows why the elevation of Polaris, aka the “North Star”, is equal to the observer’s latitude (θ). Think parallel lines cut by a transversal. Note that Polaris is actually located about 1° away from directly over the North Pole, but there’s a simple correction for that.

Now about those parallel lines … there’s only one Polaris, of course, but because Polaris is so far away compared to the size of the Earth, a line of sight from any observer to Polaris will point in the same direction (i.e., be parallel) to any other. Not exactly, but close enough for most purposes. If you don’t get why this is, see my March 2, 2020 post and read up on parallax.

The Royal Observatory at Greenwich published tables of astronomical data listing the time of day when the Sun crosses the meridian and reaches its highest point in the sky. This time is known as solar noon. It’s always close to clock noon (12:00) but varies either way depending on the season. So the tables provide times for every day of the year. And those times for any given day are the same regardless of latitude.

If your ship’s clock is set to Greenwich time (GMT), and the Sun crosses the meridian at 13:44, then you must be west of Greenwich by two hours. Two hours of time equates to 30° of longitude, so your ship must be located about halfway across the Atlantic. I’m using round numbers to make this easier. In reality, timing must be calculated to a precision of minutes and seconds for accurate location.

Problem was, at the dawn of the Age of Exploration, no accurate mechanical timepieces existed. Sure, they had pendulum clocks, but nothing that would really keep accurate time on a rocking ship. So they turned to a celestial clock — the moons of Jupiter. The following animation shows Europa, the brightest moon of Jupiter, in its 3.55 day orbit around the planet. Telescopes of that era could easily see this moon.

Notice how Europa “disappears” before it actually reaches Jupiter. This happens when it’s eclipsed by Jupiter’s shadow. In this case the shadow is cast to the right, but depending on where Jupiter and Earth are in their orbits around the Sun, the shadow can be cast in either direction. When Europa reappears in this animation you can see it emerge directly from the edge of the planet.

Greenwich published eclipse tables that took account of this shadow effect. They were used by astronomers, surveyors, and navigators for determining longitude. If you measured the time of an eclipse, relative to your measured time for local solar noon, you could compare it to the GMT eclipse time. The difference between those times could then be converted into degrees of longitude.

It should be noted that these observations and measurements were difficult at best on a moving ship, and when feasible were done in sheltered harbors or on islands where a pendulum clock could be used for timing. This procedure allowed longitude measurements accurate to within a few nautical miles.

There were other astronomical methods for determining longitude, such as using the position and phase of the Moon compared to Greenwich tables, but as with Jupiter’s moons, all provided limited accuracy and convenience. The timing problem was finally solved by John Harrison’s 1764 invention of the H4 Chronometer. Follow that link for photos of some exquisitely crafted antique scientific instruments.

Of course, in modern times, all you need is a GPS receiver to know exactly where you are. High-end units can determine your location to a precision of a few centimeters! Still, just in case of GPS failure, all military and commercial vessels require at least one crew member trained in the old navigation methods. They also carry the requisite navigational instruments, as well as hard copies of astronomical tables and charts.

Next Week in Sky Lights ⇒ Flapping Your Arms and Flying

8 comments on “Q&A: How Early Explorers Measured Their Latitude and Longitude”