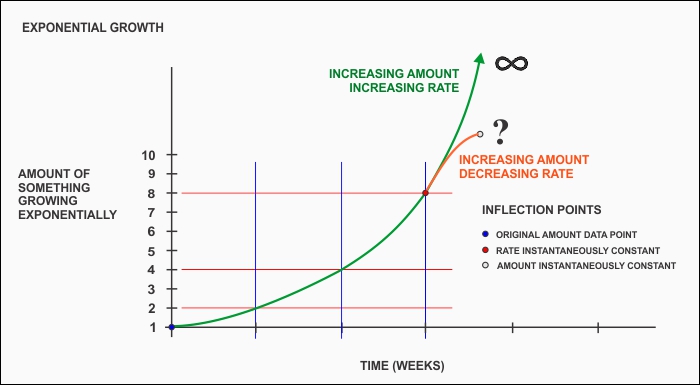 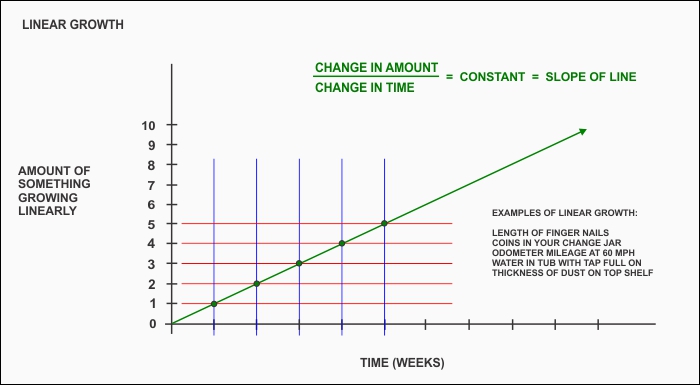 Question: I’ve been hearing a lot about “exponential growth” lately. I know it means something like “really fast” but I don’t get the scientific significance. Please explain! — Many Readers, USA

Answer: First, my apologies to readers expecting “Ice Tsunamis”. I bumped that post to Apr 13 because this question seems to be going viral. Haven’t bumped a post since Chelyabinsk back in 2013.

Linear growth (or decay) plots as a straight line. It’s very predictable. Note how for every week of time the increase in amount is the same. Physical quantities are rarely exactly linear, but some common (admittedly approximate) examples are provided to help you get the idea.

Exponential growth plots as a curved line. And the curvature (slope) increases over time — it keeps getting steeper. This makes predicting future amounts more difficult. Take a look at the graphic below:

Using the data in this graphic, here’s the simplest equation for describing exponential growth:

If G > 1 then the quantity Y increases exponentially over time. If G = 1 then Y grows linearly. If G < 1 then Y decays exponentially (e.g., as does a radioactive isotope).

One of the ways growth can be identified as exponential is if it exhibits a constant doubling time. For any quantity growing exponentially, the time it takes for Y to double (TD) can be calculated as:

In the graphic above G = 2, so this is a trivial example with TD = 1 week. But that doubling will happen every week, forcing the curve into an ever-steeper climb. In many common scenarios G is only slightly greater than 1.0. A savings account that grows at 8% (G = 1.08) has a TD = 9 years.

Other examples of exponentially growth include: feedback in electronic circuits, gravitational tidal force near black holes, possible moves in board games like chess, and populations of living creatures — viruses included. Note that if every pair of parents produce two progeny, then G = 1 and there is zero population growth. If a single virus can spawn 10 copies, G = 10 and we will see exponential growth.

Here’s the worrisome thing about exponential growth (unless it’s in your savings account). It starts so slowly that, given the uncertainties of measurement, it almost looks like linear growth. By the time exponential growth is detected, things are happening so fast it’s difficult to react.

However, exponential growth cannot continue indefinitely in the real world. Any physical system that grows exponentially will at some point reach a limit imposed by available growth resources. This concept was first proposed by Thomas Malthus in 1798. He applied it to human population growth vs. available food supplies. This concept has come to be known as Malthusian limits to growth. And it also applies to viruses.

At some point even viruses run out of resources. Their host population decreases in number, individuals in that population develop immunity, or transmission rate is inhibited by environmental changes or intentional defensive actions. Ultimately, any virus will hit its Malthusian limit.

———  seque from mathematics to current events  ———

So this is what epidemiologists are looking for in the data — a divergence from the exponential growth of virus-caused human deaths. The first sign will be a slowing of the rate of increase. Numbers will continue to climb, but they won’t climb as fast (orange curve in graphic). The process begins at an inflection point (red dot) where the curvature instantaneously becomes linear. Mathematicians would say “the second derivative of the curve goes from positive to negative”.

What happens after that depends on too many factors to predict … the curve could stay flat with a virus population that remains constant, it could start climbing again, or it could drop to essentially zero, as has happened with smallpox and other contagions. But first we need to see that inflection point. And as of Sunday April 5, New York reported its first indication of exactly that.

Be safe out there.