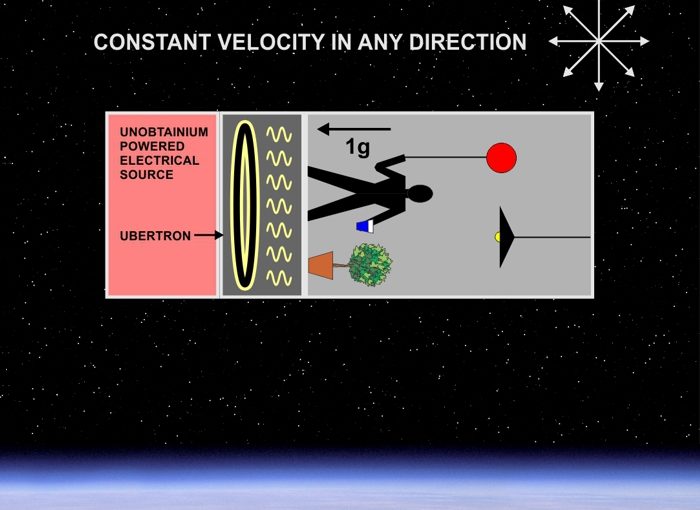 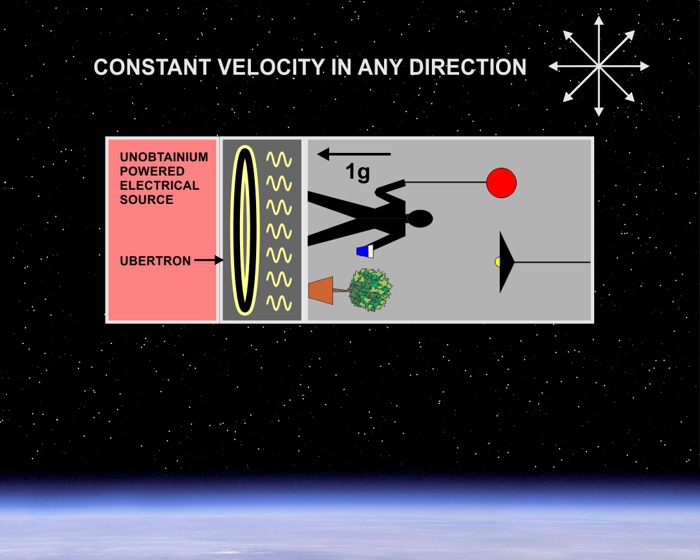 Question: I’ve enjoyed your last few posts about artificial gravity. I’m also a big fan of the Gravitron at our local amusement park. 🙂  What I’m wondering about is all these sci-fi shows where the artificial gravity is somehow directly generated by advanced technology. Any chance that could ever be done? — JK, Orlando, FL

Answer: The short answer is: Not likely. However, scientists are generally cautious about claims regarding what is possible or impossible. There is a theoretical method for generating gravity, and the graphic illustrates one possible mechanism. But the amount of energy required just isn’t available with our level of technology.

In the graphic, we have a particle accelerator under the floor of the craft. A beam of heavy ions is being circulated in the ring. If the ions circulate fast enough they will experience mass dilation, as has been experimentally confirmed in existing accelerators. This is relativistic mass (mR), but it is mass nonetheless, and all mass will generate gravity in an amount that is directly proportional to the mass.

We need a beam of ions circulating in this accelerator, so just to make the calculations easy let’s assume we have ions with a total rest mass of mO = 1 kg. In reality, accelerators work with ion masses on the order of nanograms, but this is already science fiction, so let’s also assume we have an Ubertron accelerator that can handle 1 kg. To create normal 1g gravity, these ions need to be accelerated to the point where their relativistic mass satisfies the following equation:

where R is the distance between the ion beam and the occupants in the cabin above, and G is the universal gravitational constant. Again, for simplicity, we’ll assume R = 1 m. That means we’d need:

Given the ion rest mass of 1 kg this will require extreme mass dilation and a huge amount of energy. According to special relativity the required speed would be:

That’s actually greater than the speed of light (c = 299,792,458 m/s), but we’re rounding “c” up to 3.0 x 108 m/s just to keep the arithmetic simple. For comparison, the Large Hadron Collider (LHC) circulates ions at the highest speed of any accelerator on the planet. The LHC can accelerate ions to a speed of

At LHC speeds the the relativistic mass is 5477 times the rest mass. But to generate 1g the relativistic mass must be 1.7×1010 times the rest mass. Those 13 extra 9s in the required speed represent a huge increase in energy. The LHC consumes 200 MW of power, one third of that used by its entire host city of Geneva, Switzerland. That means our artificial gravity generator will require a power on the order of 3.4×1012 MW — around 3 million times the entire global electrical power capacity!

We don’t yet have an energy source capable of producing that much power. Much less one that could be installed under the floorboards of a spacecraft. And even if we did, we’d run into the same gravity gradient issues suffered when using centripetal acceleration for artificial gravity. But in this case, the gradient would be proportional not to the radius but to the square of the radius.

So with this hypothetical gravity generator 1 meter below your feet, and your feet feeling 1g, your head (2 meters higher up than your feet) would feel (1/3)2 or 1/9g. The gravity gradient would be an uncomfortable 90%. To get the recommended maximum gradient of 10% we’d need to move the gravity generator farther down, to around 20 meters below the floor, meaning it would require even more power to provide 1g at your feet.

However, it might be possible to do an end run around that gradient problem if we discover some new physics.

In science fiction, how they produce artificial gravity with zero gradient is rarely part of the story line. When they do talk about the technology, it’s usually attributed to some advanced physics. Gravitons (not Gravitrons) are often cited as the mechanism. Gravitons are still hypothetical particles. We don’t know how to produce them, and it’s debatable whether that’s even possible.

Yet some believe that if physics can discover the long-sought unified field theory, we might be able to turn gravitational forces on and off at will. After all, there was a time when magnetic forces were only available from lodestones (geologically known as magnetite). Then, in 1873, James Clerk Maxwell published his theory of electromagnetism and made possible the generation of “artificial magnetism” using the flow of charged particles through a conductor. There may be a similar mechanism for gravity.

Next Week in Sky Lights ⇒ Predicting the Motion of Celestial Objects