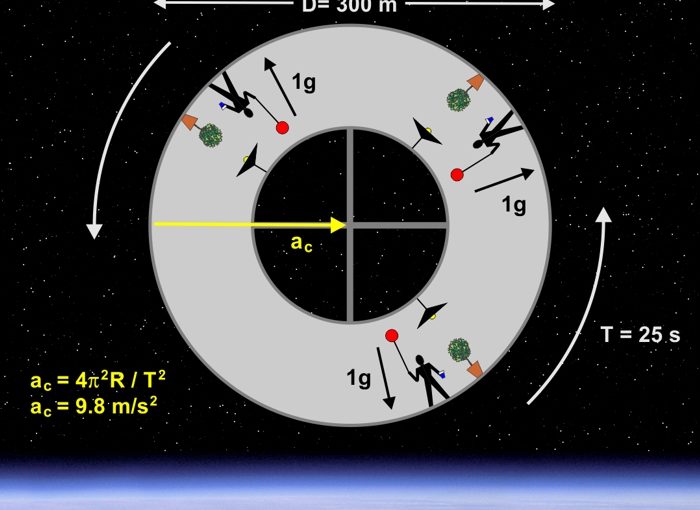 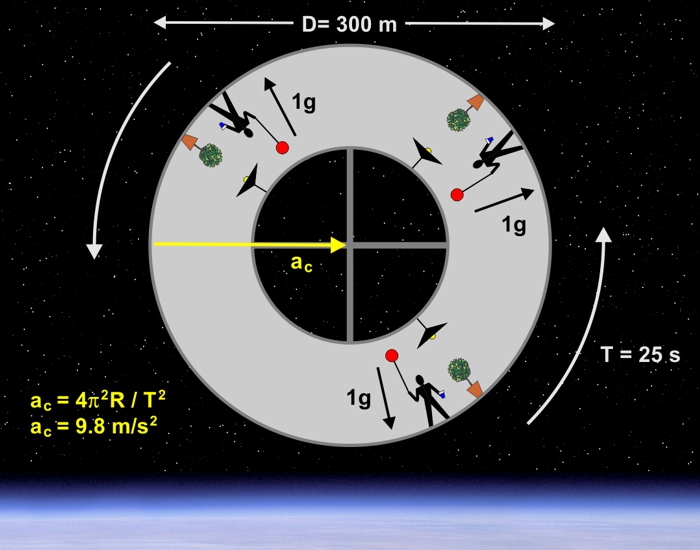 Last week, and in earlier posts, we explained why 1g spaceflight is so energy-intensive and impractical for crewed missions much beyond the Moon. The reason was the amount of chemical fuel required. But there’s a compromise between 1g spaceflight and a Hohmann transfer that could at least mitigate the effects of prolonged weightlessness.

You don’t need to run your engines continuously to generate artificial gravity in space. There’s another way to create g-forces: centripetal acceleration (aC). Instead of changing speed, changing the direction of motion also creates g-forces. The main graphic shows what this would look like.

Engines would be needed to start the rotation (or stop it), but once the station is rotating in the frictionless vacuum of space, inertia will keep it spinning. No need for a continuous engine burn (and fuel consumption) as with linear acceleration.

Think about what you feel in your vehicle when negotiating a curve at constant speed — you feel a force toward the side as your body attempts to remain on a straight-line path while your restraints pull you in a different direction along with the rest of the car. The inertia of your body resists changing speed, and it also resists changing its direction of its motion.

Note that if you use the values cited for Kubrick’s station you actually get only 9.5 m/s2. That’s enough gravity to make things behave normally. People would feel 3% lighter than their normal body weight, but most wouldn’t notice a change that small.

The formula for centripetal acceleration is different from that for linear acceleration (cited last week) but the effect is the same. The g-force acts away from the center of rotation, opposite the direction of aC. Feet are held firmly to the “floor”, plants grow “up”, liquids stay inside cups, and chandeliers hang “down”. Because the air in the station also feels this g-force it stratifies with greater density near the floor, so helium balloons would also behave as usual.

It’s important to note that, although gravity might feel normal in 1g centripetal acceleration, there is a difference compared to what happens in linear acceleration, or on Earth’s surface. If you try to pour that cup of liquid onto the plant, the stream of water will not fall straight “down”. It will deflect, curving in the direction opposite rotation. How far it deflects depends on how far it falls. This is the Coriolis force in action. Same with objects tossed upward into the air — juggling would be a whole new sport.

Kubrick’s station would be fine for Earth or lunar orbits, but for interplanetary travel it would have too much mass to maneuver when trajectory adjustments are needed. Also, the amount of interior volume would not be required for initial exploratory crews.

Nonetheless, you can still avoid the bad effects of prolonged weightlessness by using a smaller rotating craft with a balanced pair of habitats. When in-course maneuvers are needed, rotation would be temporarily stopped for the engine burn and restarted later. This eliminates gyroscopic torques that would otherwise interfere with maneuvers. 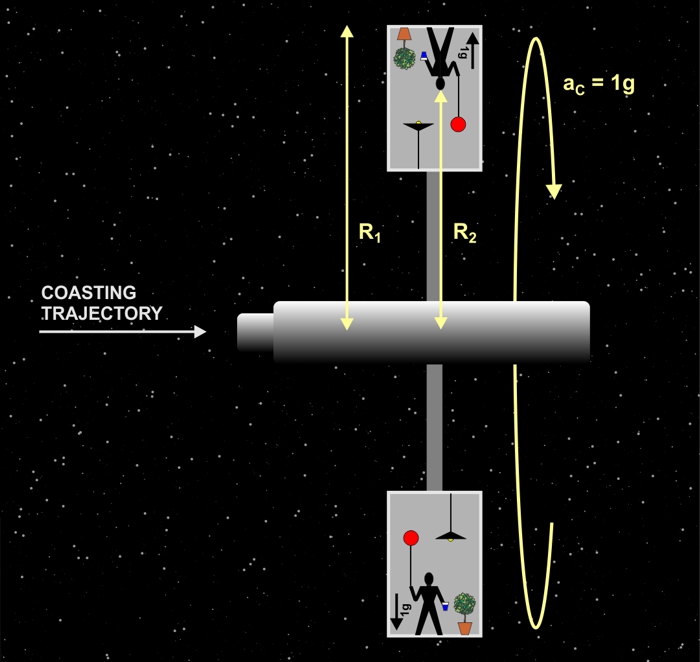 The graphic shows two habitation modules for simplicity. In practice, there would probably be a single habitation module on one end, and suitable ballast (fuel, water, supplies) to balance the craft on the opposite end. As crew members move around transferring and consuming supplies, an active control system would need to sense and correct any imbalance (say by pumping water back and forth between modules) to maintain stable rotation. But something like that would also be required for Kubrick’s station.

One final caveat on artificial gravity generated with centripetal acceleration: The amount of g-force produced depends on the radius of rotation according to:

So if the graphics above were drawn to scale, and the crew’s feet were feeling 1g, then their heads would be feeling around 0.75g. That might be disorienting. It would feel like you’re wearing ankle weights. It might disturb your inner ear and sense of balance. It’s hard to know for sure without actually trying this in space, but space medicine experts say that a 10% gravity gradient would probably be tolerable.

To achieve that 10% gradient (for a 2 meter tall person) the radius of rotation would need to be 200 meters. The graphics show a radius of about 24 meters. Of course, even longer radii are better physiologically, but more difficult, massive, and expensive structurally. The longest dimension of the ISS is around 100 meters, and it took 10 years and more than 30 missions to construct.