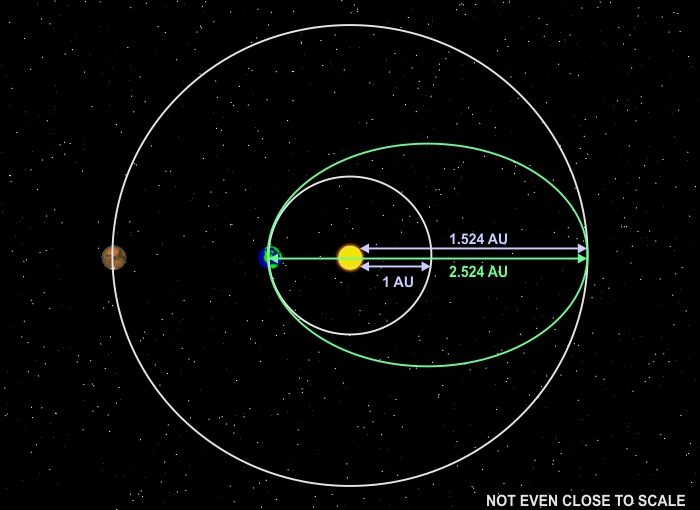 Question: I’ve read a lot of articles about space travel to Mars, and they all cite pretty much the same travel time of 9 months. Why can’t we build more powerful rockets and get there faster? — CS, Pasadena, CA

Answer: We could, but the faster we want to get there, the more difficult and expensive it will be. The “9 months” cited is for a specific trajectory using the lowest amount of energy possible. That trajectory is known as a Hohmann transfer, first calculated by Walter Hohmann in 1925.

Note: The animation shows the spacecraft moving at constant speed along the elliptical transfer orbit. In reality, the craft would be slowing continuously on its way to aphelion, and accelerating on its way back to perihelion. This effect could have been animated but wasn’t essential to answer this question.

Hohmann transfers assume we start in a stable circular orbit around Earth — what is sometimes called a parking orbit. Typical speeds are around 7.7 km/s. From that orbit the engine can be fired to produce a change in velocity (ΔV) that accelerates the spacecraft into an elliptical orbit with aphelion at the orbit of Mars. The ΔV required to do this is 2.9 km/s. The engine thrust and duration of burn needed to impart this ΔV are determined by the mass of the spacecraft.

Here’s the geometry of a Hohmann transfer from Earth to Mars: 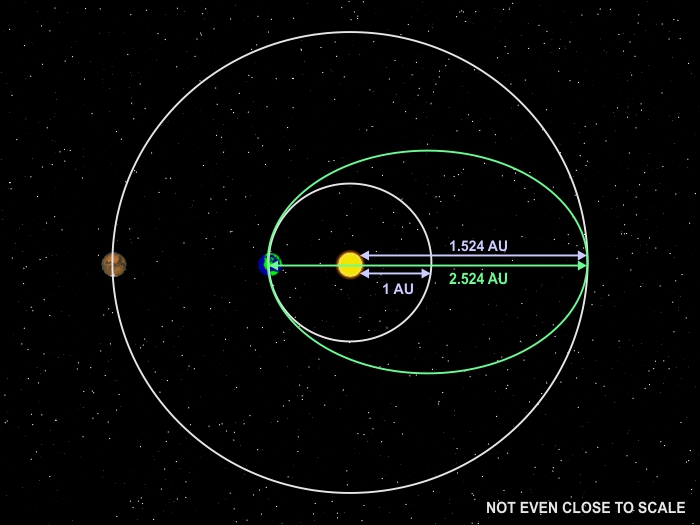 Kepler’s Third Law relates the orbital period (T) of a planet to the semi-major axis (a) of its orbit:

But this would be for a complete orbit, and we only need half an orbit to get to Mars, so

Because Earth and Mars move at different speeds in their orbits, the 8 month 18 day transit time for a Hohmann transfer constrains the launch to a few days around the time when Mars leads Earth by 44° in its orbit. This alignment occurs at 26 month intervals and is commonly called the launch window.

So that’s where the “9 months to get to Mars” comes from. It assumes the mission is designed to fly the most efficient route between Earth and Mars using the least amount of fuel. Interplanetary travel requires a lot of fuel, so efficiency is paramount. For every kilogram of fuel saved, you can carry another kilogram of payload.

The animation shows a successful Hohmann transfer. It also shows what would happen if, upon reaching Mars, the engines failed to fire and decelerate the craft as planned. The mission would become an unintentional “fly by” and the craft would continue on an elliptical orbit. The original Hohmann orbit would be altered in size and shape by the gravity of Mars, depending on the approach trajectory. But whatever the new orbit, it might not be easy (or even possible) to return to Earth using the remaining fuel’s ΔV.

Nonetheless, it’s instructive to simulate a “miss” and watch what happens. If the video ran long enough, eventually the spacecraft and Earth would reach perihelion at the same time. That would take over 10 years — not practical for a crewed mission. Orbits that have been altered by the gravity of Mars might not ever intersect Earth’s orbit again — the craft could be literally “lost in space”. This is why that engine burn at Mars is mission critical.

Here’s how we properly orchestrate the fastest return trip …

First the spacecraft needs to achieve a parking orbit around Mars. The required ΔV = –2.3 km/s. It takes a smaller ΔV to get out of the Hohmann orbit than it does to get into it because the craft slows as it climbs away from the Sun. This negative ΔV is what allows the craft to be captured by the gravity of Mars.

From there, the reverse Hohmann transfer can be used to return to Earth. The maneuver is similar to the Earth-to-Mars transfer, but now the spacecraft needs to reduce its speed (relative to the Sun) to drop into the same Hohmann ellipse and intersect Earth’s orbit.

As with the original launch, we can’t do that return transfer at just any time. We must wait at (or on) Mars for 1.524 years until the planetary alignment is correct — unless we have the fuel for a fast trajectory or advanced propulsion engines. But more about that next week.

Next Week in Sky Lights ⇒ Getting to Mars Faster

Tip of the Iceberg Redefined
Getting to Mars Faster
HOME