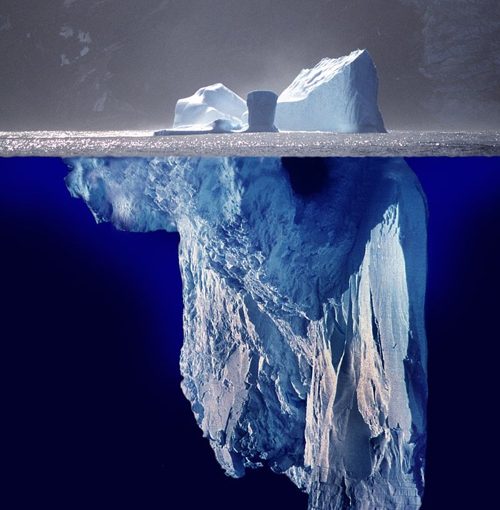 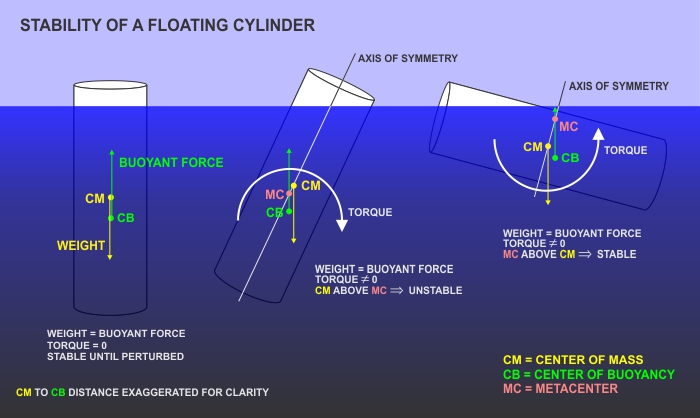 I read an article in Physics Today titled Tip of the Iceberg, and was surprised to learn that many drawings of icebergs used in the media (and even textbooks) are incorrect. I’m talking about drawings where the exposed part of the iceberg as well as the submerged part are shown.

Take a look at what a Google Image search for “tip of the iceberg” yields. What’s wrong with many of those drawings is incorrect exposed-to-submerged ratios and/or impossible flotation orientations.

Note that these numbers refer to freshwater ice floating in seawater. Icebergs in a freshwater lake and icebergs consisting of frozen sea ice have density ratios that differ by a few percent.

The main graphic shows the other error, which is a bit more difficult to understand. Some drawings show icebergs floating in unstable orientations. Here’s a quick example: Drop a cork into a container of water. Repeat as often as you have time for. You’ll see that the cork never floats with a circular end parallel to the water surface. It always floats on its side, with the circular ends perpendicular to the water surface.

The situation is even more obvious with a length of wooden dowel or a pencil. It would be quite surprising to see either of those object floating with their long dimension perpendicular to the water surface.

On the other hand, a wooden poker chip or any thin token will always float flat on the surface

And this raised the interesting question of just what aspect ratio (H/D) a cylinder would need to float with its rotational axis perpendicular to the water. Here’s a quick graphic to explain those terms:

The cylinder in the above graphic has an aspect ratio of around 0.25, a poker chip is maybe 0.05, and most iceberg drawings look to be around 2-3.

In 1991, American Mathematics Monthly published an analysis by Edgar Gilbert titled How Things Float. He was able to prove that, for seawater and glacier ice (with a density ratio of 0.9), stable flotation of a cylinder with its rotational axis perpendicular to the water requires H/D < 1.1785. If you revisit the search for “tip of the iceberg” you’ll see most of those icebergs are floating in the wrong orientation.

Granted, in perfectly still water, a cylinder with H/D > 1.1785 could be stable in that orientation. But any perturbation from wind, waves, melting … even a flock of seabirds landing on it, would cause spontaneous reorientation. Like a cone balanced on its vertex, it would be an unstable configuration.

So that’s what I’m trying to show in the main graphic, but without all of Gilbert’s math. The key concept is the location of the metacenter (MC). If the center of mass (CM) of the floating body is not vertically collinear with the center of buoyancy (CB), then a torque will occur.  If the CM is above the MC, then that torque will increase the amount of tilt and “capsize” the floating object into a horizontal orientation. Once horizontal, the CM is below the MC and the torque acts to reduce further tilting.

The location of MC (sometimes referred to as metacentric height) is at the intersection of the vertical line through the CB and the axis of symmetry. To see why that is you’d need to read Gilbert’s paper and be fluent in math and physics. Or you can trust my translation.

This analysis relates only to floating objects with uniform density. Practical water-faring vessels are built with weight concentrated near the bottom to enhance their stability and resist perturbations.

What's Up With Betelgeuse
Q&A: Why a Journey To Mars Takes 9 Months

2 comments on “Tip of the Iceberg Redefined”