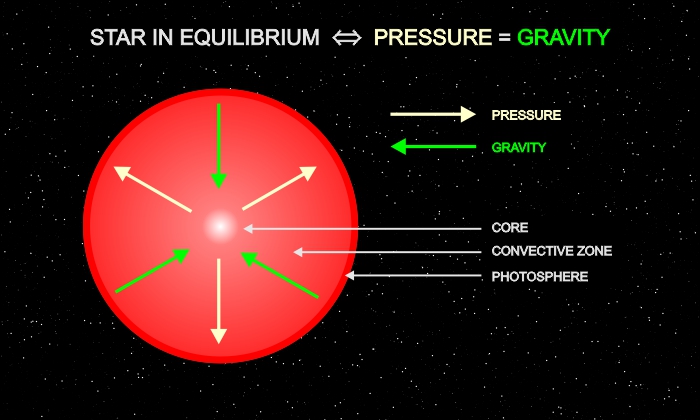 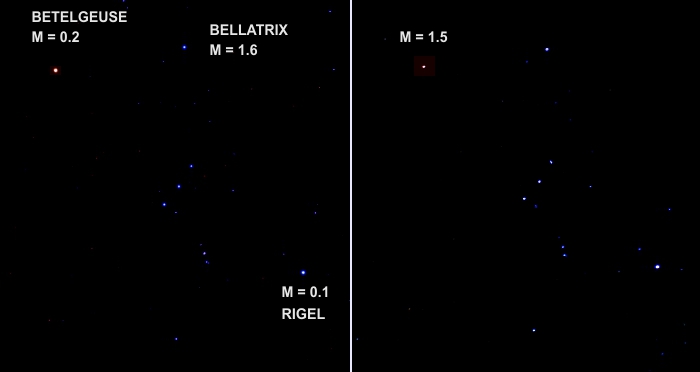 You may have read reports that Betelgeuse, the red giant star marking the east (left) shoulder of Orion, is getting dimmer, and that this could be a precursor to the star exploding in a supernova. I shot the left photo some years ago, and the right photo last week. You can clearly see the difference in brightness.

At maximum brightness Betelgeuse outshines Bellatrix and even rivals Rigel. At the moment, it’s about as bright as Bellatrix and clearly dimmer than Rigel. Betelgeuse is formally known as α-Orionis, with the “α” designating it as the brightest star in the constellation. Obviously that designation is only sometimes correct. If you look at a list of the brightest stars in the sky, Betelgeuse is usually ranked #10 or #11 (which is an average value). With its current brightness it actually ranks around #20.

The AAVSO (American Association of Variable Star Observers) is currently tracking 1,432,531 variable stars, including Betelgeuse. Unlike Betelgeuse, most variables are too faint to see with the unaided eye. Much of this is work by volunteer amateur astronomers who have embraced this sub-hobby. Magnitude measurements are facilitated by a relatively inexpensive ($1500–2500) device called a photometer that couples directly to a telescope, but many observers make measurements by eye, comparing the star’s brightness to nearby non-variable stars of known brightness.

The following graphic, produced by the AAVSO chart generator, shows how the brightness of Betelgeuse varied over the past two years. The primary period of this variation is around 425 days, with smaller change cycles of 100–180 days and 5.9 years superimposed. Differences in data point shapes or shades mark observations made by specific astronomers. In May-June of each year, Betelgeuse is too close to the Sun for reliable measurements. This is why there’s a gap in the data.

Click on the chart to see an enlarged version:

The vertical axis shows magnitude (M), a quantitative measure of “brightness”. Lower magnitudes are brighter. The magnitude scale can be confusing to beginners, but if you follow that last link you can read more about how this counter-intuitive scale came about.

So what does all this have to do with Betelgeuse possibly exploding? And why do stars vary in brightness in the first place? Both good questions, but to answer them we need to understand how non-variable stars maintain their constant brightness.

Stars in equilibrium are a balance between two forces: gravity from their enormous mass, and pressure from the heat of fusion reactions in their core. The following graphic shows this equilibrium scenario:

Smaller stars can maintain this equilibrium for billions of years — larger stars burn through their fuel more quickly. But at some point, all stars run out of fuel. New stars typically “burn” hydrogen, fusing it at extreme temperatures and pressures into helium, carbon, and farther up the periodic table. How far they can go depends on the star’s mass. A massive star like Betelgeuse (11.6 times the mass of our Sun) can get all the way up to silicon, the fusion “ashes” of which are iron.

Once the core becomes iron no further fusion is possible and the reaction shuts down. The inward pull of gravity is no longer balanced by internal pressure, so the star collapses. Current theory says any star with a mass more than 10 times that of the Sun will produce a supernova, a result of the infalling material rebounding from the core. The star tears itself apart scattering its outer layers into space at high velocities and leaving behind a white-hot iron core.

Variable stars are in a state of semi-equilibrium, with their outer layers changing in size and temperature over time. In the 1930s, Sir Arthur Stanley Eddington showed that the equations describing stellar equilibrium allow for a cyclic instability related to the degree of ionization in a star’s outer layers. Imagine a variable star is at its largest size and brightest magnitude. Less ionized gas is more transparent, allowing more light to escape. This cools the star and causes it to contract, raising the temperature and causing greater ionization (and opacity). This reheats the gas and starts another expansion cycle.

When Betelgeuse does go supernova it will likely be as bright as the full Moon (magnitude -12) and be visible during the daytime. The star is located around 450 light years from Earth, so we’d be in no danger from the explosion. Astronomers estimate that Betelgeuse could explode anywhere from “tomorrow to a million years from now”. We don’t know enough at this point to make an exact prediction.

Interestingly, Betelgeuse may have already exploded. The flash of light would take 450 years to reach us, so we wouldn’t see it until 450 years after it explodes.

Next Week in Sky Lights ⇒ Tip of the Iceberg Redefined