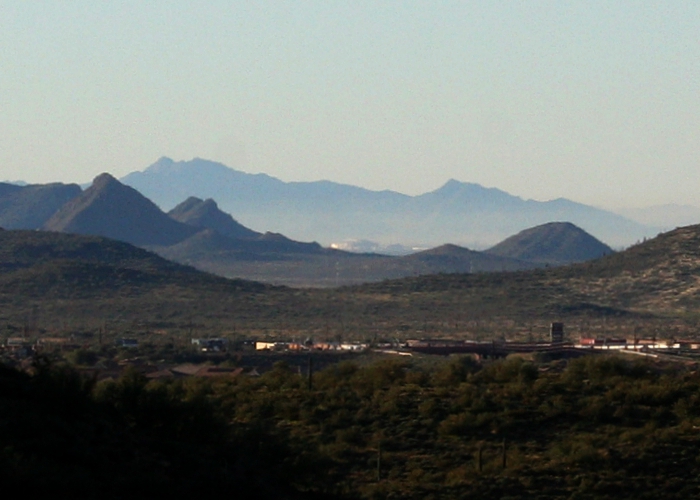 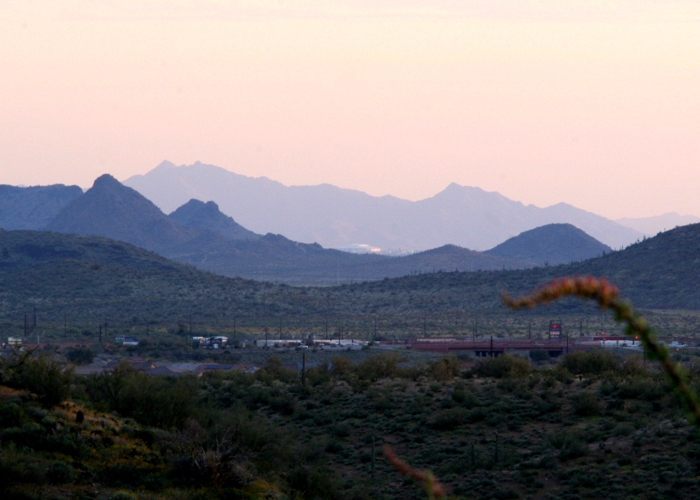 Click on either arrow to alternate between the two photos. This is the same scene captured at sunrise and again 4 hours later. Watch what happens to Phoenix Stadium (the white domed structure at center), and the background and midground mountains. What you see happening here is called looming — an increase in apparent elevation under certain atmospheric conditions.

FYI, Phoenix Stadium is located approximately 44 km (27.3 miles) south of me at an elevation 0.35 km (1133 ft) lower than Heimhenge (my observing location). Here’s an image of Phoenix Stadium taken from the opposite direction. Height to the top of the dome is 71.2 m (235 ft). Click to enlarge: 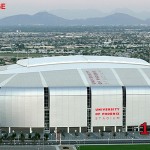 Ever since I experienced that extreme superior mirage last year I’ve been watching the horizon for related atmospheric refraction effects. Just this month I captured a surprising daytime refraction effect that shows how much the visible horizon can be distorted by temperature gradients.

First some background. The path of a light ray through the atmosphere is rarely a straight line. The ray can be bent by variations in atmospheric temperature and density along that path. This causes distant objects to appear lower or higher in elevation than they really are. The most common example is the inferior mirage frequently seen on highways. Less common are superior mirages, where a distant object appears elevated and/or stretched vertically.

What you’re seeing in the slider is a less-extreme type of superior mirage. The atmosphere had cooled overnight to a temperature of 5 °C (40 °F). By 10 am it had warmed to near 16 °C (60 °F). The light of the rising Sun warmed the upper air layer first, while the lower air layer remained in the shadow of mountains surrounding the valley. This created a vertical gradient of air temperatures with cooler air at the bottom, forming what is called an inversion.

The speed of light is slower in cooler/denser air, so light rays refract (bend) toward that cooler layer. Rays from distant objects that would normally pass above me are refracted downward into my eyes and camera. This results in distant objects appearing higher in elevation than they are geometrically.

If there were no atmosphere, and light rays followed exactly straight lines, then my view of Phoenix Stadium should be determined by the plane geometry shown in the following graphic extracted from Google Earth Pro. My camera is at the upper left corner, and Phoenix Stadium is at the lower right. The topography between observer and stadium has a vertical stretch of 120:1 for clarity. Click to enlarge:

It’s worth noting that when you extract an elevation cross section from Google there is no compensation for Earth’s curvature. What is displayed by Google are elevations above sea level. It treats the Earth as though it were a flat plane.

[Google provided the elevation data in units of “feet” and “miles”, so we’ll stick with that for the remaining analysis. My apologies to readers outside the USA. Google’s default settings were based on my IP address, and I didn’t learn until later that I had other options.]

I could use a graphics editor to “bend” that cross section into the proper curvature, and that would obviously change the lines of sight. But over a distance of 27.3 miles ignoring curvature introduces negligible error. Look at the graphic and note the tiny red vertical line after “18.2 ft TO SCALE →”. The height of that line is the amount of Earth curvature over 27.3 miles.

With that in mind, the geometry shows that I should be able to see a fair amount of open ground in front of the stadium, but that never happens. Even on a windy day with a well-mixed atmosphere, the lowest I’ve ever seen is the base of the stadium — very much like the 10 am photo in the slider. Why is that I wondered?

It’s possible that the elevation cross section from Google Earth Pro is not accurate. Several studies have been done testing the accuracy of that database. Google gets its elevation data from a variety of sources, and depending on geographic location the error could be anywhere from ±5–100 ft. That’s enough to potentially obscure line of sight to the ground in front of the stadium. On the other hand, the error could be in the opposite direction.

Instead, I think this is caused by the urban heat island created by the city of Phoenix. The images in the slider show hilly, largely undeveloped land between the midground mountains and the camera. Beyond that midground range of mountains is the Phoenix metro area, with around 10,000 square miles of concrete and asphalt and red tile roofs.

Those materials absorb a lot of heat during the day, and conduct that heat to the air day and night. Even during an inversion, this creates a third layer of air close to the ground that can be warmer than the air above. Rays of light originating in this layer curve upward into the cooler air and pass above my camera. This optically lowers the ground between the stadium and midground mountains, similar to what happens in an inferior mirage.

When you combine refraction effects with Google database errors, it’s hard to know for sure what the true line of sight should be. One way to know would be to run a string from my camera, just grazing the midground peak, and continuing on down to the stadium. The string would need to be so tight that it remains perfectly linear and doesn’t sag down midway. Lacking such string, we apply science the best we can.

If I lived on the shore of an ocean, at my altitude of 2200 ft, the geometric horizon would be around 57 miles distant. There are few inland locations (outside the Great Plains) where a clear view to the geometric horizon is possible. But if you live in an area where you can see buildings or mountains several miles away, I’d suggest this experiment: From a repeatable location, take some photos of the most distant object you can see. Do this on days with markedly different weather conditions. You may be surprised, as I was, that your horizon isn’t necessarily where you see it.