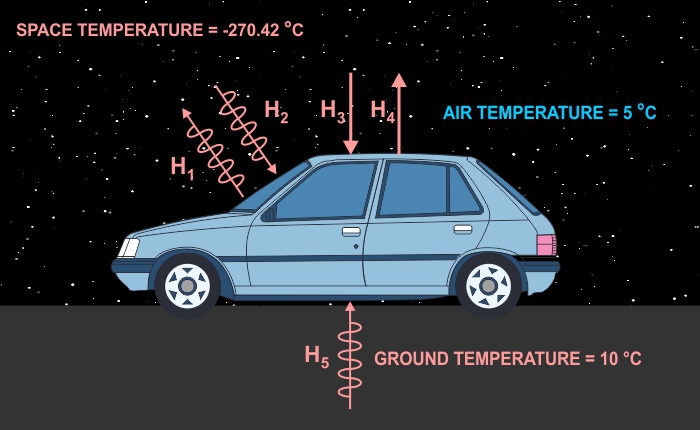 Question: This morning when I left for work I found ice on my windshield. Had to scrape it off before I could drive. What I don’t get is that the overnight low was 5 °C — five degrees above freezing! How can water freeze at that temperature? — LF, Green Bay, WI

Answer: Your car, or at least its windshield, experienced what is called radiative cooling. There are three ways heat can be transported to and from objects:

When your car sits outside at night exposed to a cloudless sky, and the air temperature is within a few degrees of freezing, the temperature of your car can drop below freezing and allow frost to condense on exposed parts. I’ve seen that happen even here in Arizona on a cold clear night. The effect results from an imbalance between the five heat flows shown in the graphic.

H3 and H4 are slow conduits because air is a poor conductor of heat. H5 is also a trickle because of the typically small difference between air temperature and ground surface temperature. The car’s tires are very good insulators, so hardly any heat is conducted from the ground.

When the sky is clear, the car can cool to below air temperature because of the imbalance between H1 ad H2. In terms of infrared radiation, the cold car is WAY warmer than the night sky. The night sky has a radiative temperature of −270 °C, so very little heat is transferred to the car. Instead, the car will emit its heat in an attempt to reduce its temperature to −270 °C. As the car cools, at some point, the loss of heat through H1 and H4 will be balanced by the inflow of heat from H2, H3, and H5. The car is then at thermal equilibrium and its temperature remains constant.

Elon Musk launched his Tesla into space last year. In space H3 and H4 are zero, and H5 is close to zero. By now, most of his car has cooled to near −270 °C. It’s reached thermal equilibrium with space. But since it’s still receiving heat radiation from the Sun it’ll always be slightly warmer than −270 °C. In fact, with its dark red color, the side facing the Sun could heat up to maybe 150 °C, but that heat would be rapidly conducted to other parts of the vehicle and radiated into space. My June 27, 2016 post The Temperature of Space goes into more detail on that process.

On the surface of Earth, under the right conditions, H1 can dominate the other heat flows. When it does, the temperature of your car can drop below air temperature. Parking in a garage, or even under a carport or tree, can impede H1 by reflecting some heat back toward the car.

If you’re stuck without covered parking, you won’t get frosted every clear night. Lower humidity and higher wind speeds can impede frost formation, or cause whatever frost does form to sublimate, even while the car is below freezing. Still, good idea to carry a scraper in your glovebox.

Radiative cooling can cause problems but its actually being investigated as a process to assist conventional HVAC systems for cooling buildings. It may seem strange to consider the “coldness of space” as an energy resource, but the laws of thermodynamics show that any heat flow can be harnessed as a source of energy. We’ve been doing that with steam engines and internal combustion engines since the start of the Industrial Revolution.