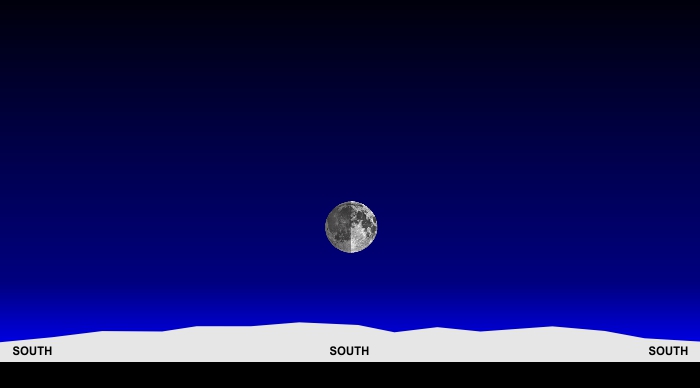 Question: I was looking at the first quarter Moon last night, noticing how the terminator changed its orientation angle as the Moon crossed the sky. It made me wonder about several things. If you tracked how the terminator angle changed over the year, could that allow you to determine the Earth’s tilt? I know the Moon’s orbital inclination would be a factor, but I’m not sure how that affects things. Likewise, I know the Moon’s elevation and terminator angle varies on a seasonal basis, but I’m having a hard time understanding why. I’m hoping you could do a graphic that explains all this. Thanks for any info you can provide. — JM, Cohasset, MA.

Answer: All good questions, JM. For an explanation of the seasonal affect on the Moon’s elevation, go back to last Monday’s post: Why the Moon is higher in Winter. For your other questions, I think animations might work better than graphics.

The top animation shows the first quarter Moon rising exactly in the east and setting exactly in the west, as seen from a point on the equator. Note that when the Moon reaches its highest point in the sky, the terminator is perpendicular to the horizon. Note also that at moonrise and moonset the terminator is parallel to the horizon, but the setting Moon looks upside-down compared to the rising Moon. This is not because the Moon rotated 180° in 12 hours, but because you are upside-down compared to 12 hours earlier. 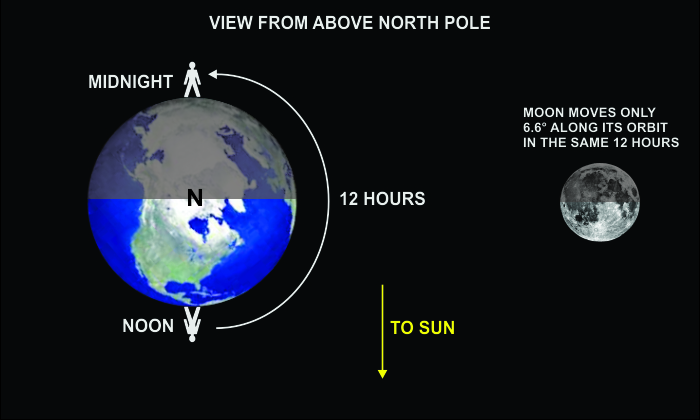 Of course, if you were exactly on the equator, the Moon’s highest position in the sky would be at the zenith (the point directly overhead), so the Moon wouldn’t be to the “south” or “north”. That said, the animation shows how the terminator appears to rotate 180° between moonrise and moonset. FYI, for the first quarter Moon, moonrise actually happens during daylight (around noon), but you’ll see it in the east if you look for it.

Now if you were at the North Pole the Moon’s motion and appearance would be totally different. Similar to the Midnight Sun, the Moon can stay visible for 24 hours, never rising or setting. This next animation shows how that would look.

In this case, the terminator remains perpendicular to the horizon as the Moon circles around you. The rotation angle of the terminator in this case is 0°. In practice, the path of the Moon around you would be slightly tilted relative to the horizon, but that doesn’t affect the terminator angle significantly over 24 hours. I should point out that the cardinal directions in this animation are not mislabeled — if you were exactly at the North Pole, every direction is “south”.

At mid-latitudes, between moonrise and moonset, the Moon’s terminator will appear to rotate by an angle intermediate between the extremes of 0° and 180°. It makes no difference what the date is. In the next animation you’ll see the terminator rotate by about 120°. At moonrise, the terminator is already tilted 30° relative to the horizon.

So it is possible to relate the rotation angle of the terminator to your latitude, but it would be a difficult calculation involving the tilt of the Moon’s orbit which, as explained last week, rotates relative to Earth in an 18.6 year cycle. You’d also need to account for the season and time of day.

Yours were complex questions JM. Rarely do I need multiple animations, but this was the best way to explain the geometry of terminator angles. Oftentimes, when puzzling through new science, it’s helpful to imagine what happens at extreme data points (in this case equator vs. pole). Those “boundary conditions” are usually easier to figure out. Once you have that, intermediate points will (usually) experience intermediate effects that vary continuously between those two extremes.

Q&A: Why the Moon is Higher in Winter
Q&A: Ice Formation in Above-Freezing Temperatures
HOME