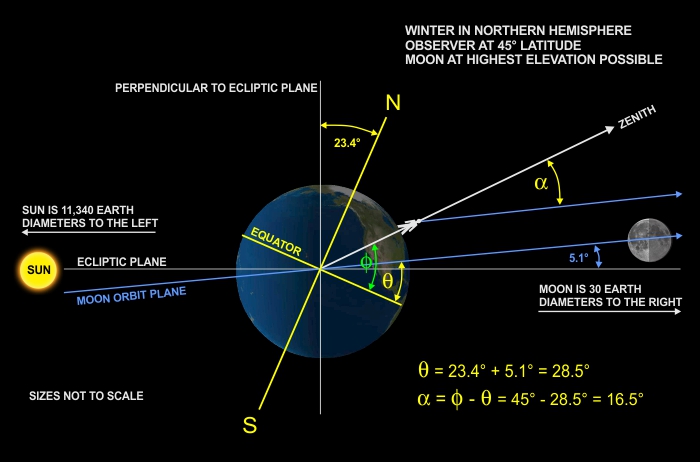 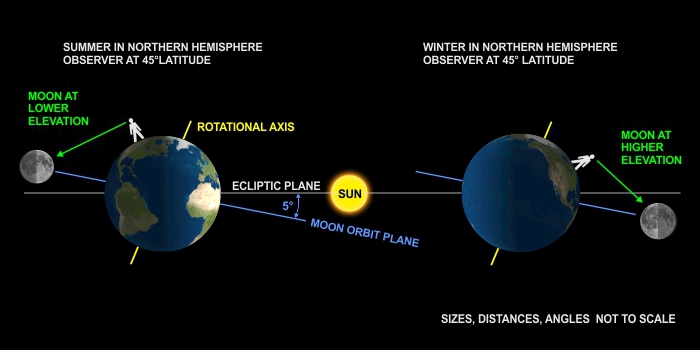 Question: I know the Moon can only be in certain places in the sky, but it seems like it’s generally higher up in the winter than it is in the summer. Why is that?  — BT, Minocqua, WI

Answer: Your observation is correct, and there’s a simple geometric explanation for that. You’re right around 45° latitude, like the person in the graphic. It shows the Earth in two positions: mid-winter and mid-summer. These locations are on opposite sides of the Sun. It’s night on the side of Earth facing away from the Sun, and night is when the Moon is usually observed.

Because the northern hemisphere is tilted toward the Sun during summer, an observer will see the Moon lower in the sky at night. Note how the green lines-of-sight differ in elevation between summer and winter. The difference is much greater than what is shown, but I had to distort everything to fit the space available.

For Minocqua, using 45° for latitude, and the extreme positions shown in the top graphic, the highest the Moon could be above the horizon in your winter sky is 73.5° [90°−16.5°]. Using similar geometry, the lowest summer Moon would transit the meridian at an elevation of 16.5° [90°−(45°+28.5°)]. You can also see from the equations that, for the Moon to ever appear directly overhead, you’d need to be within 28.5° of the equator.

I call those positions “extreme” because the Moon’s tilted orbit rotates around the Earth (while keeping its 5.1° tilt) with a period of 18.6 years. So the Moon could really be anywhere between 5.1° above and 5.1° below the ecliptic. This rotation, called precession of the nodes, is cause by gravitational interactions with the Sun and (slightly non-spherical) Earth.

The geometry above assumes the two blue vectors are parallel. Of course, they must converge at the Moon. But the Moon is so far away that the vectors are “parallel enough” for our purposes. The error introduced by this assumption is only around 0.5°.

Whatever latitude you try in this calculation will yield the same seasonal difference in elevation angle — 57° (2×28.5°). This creates an interesting effect at the equator. Half the time the Moon will be to the north, the other half it will be to the south. Since we think of “up” and “down” in reference to the horizon, when the Moon is to the south it will appear as it does to most of the northern hemisphere. But when it’s to the north, it will be “upside down” compared to its “usual” orientation. 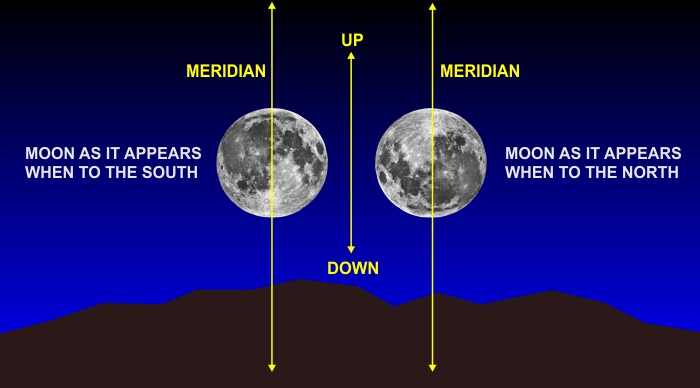 This graphic shows the Moon as it’s crossing the meridian, at its highest point in the sky. As we’ll see next week, the orientation of the Moon relative to “up” and “down” changes continuously throughout the night.

Seiches on Lakes
Q&A: Rotation of the Lunar Disk From Moonrise to Moonset

2 comments on “Q&A: Why the Moon is Higher in Winter”