My recent investigation into changing Great Lakes water levels uncovered an interesting phenomenon some readers might not be familiar with. I’m talking about a seiche (pronounced “saysh”) — a standing wave that forms in an enclosed body of water. When a pressure differential builds across a water basin, two things happen:

This effectively “tilts” the lake, which will be held in that position as long as the weather persists. On the Great Lakes, this can result in level changes on the order of 2.5 meters (8 feet). Take a look at this recent NWS bulletin for western Lake Michigan warning of beach flooding and coastal erosion caused by strong ESE winds. 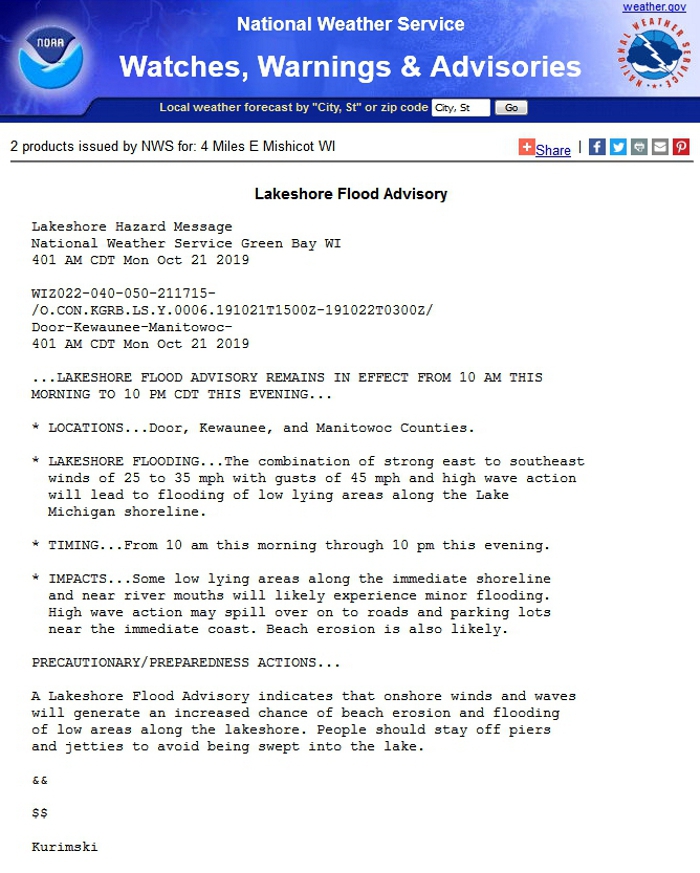 Ocean storm surges generated by hurricanes are also caused by pressure differentials. But in a lake, unlike in the ocean, after the surge drains away it can bounce back. When the weather moves out, and the pressure differential equalizes, the lake attempts to re-level itself. Water is a heavy substance with lots of inertia, so when it flows back from the surge it overshoots its level state and sloshes up again, creating a surge on the opposite side of the lake. We now have a seiche.

This sloshing back and forth can continue for several cycles. In the Great Lakes, seiches can last for days. And while they last, they can do a lot of damage on both shores. This article from MSU has some dramatic photos of shorelines affected by seiches: Seiches on the Great Lakes.

Seiches are slow. They have a period (slosh time) on the order of tens of hours. The exact period depends on wind direction relative to the fetch, depth, and shoreline topography. Eventually, internal viscous friction and drag from the lake bed will damp the oscillation to zero.

I knew that gravitational tides on the Great Lakes were smaller than tides in the oceans, but was surprised to learn they are only a few centimeters. Having lived many years on the Wisconsin side of Lake Michigan, I often noticed changes in the water level and mistakenly called them “tides”. Now I understand that those changes were caused by weather — not gravity.

Q&A: Refraction of Light in a Vortex
Q&A: Why the Moon is Higher in Winter
HOME