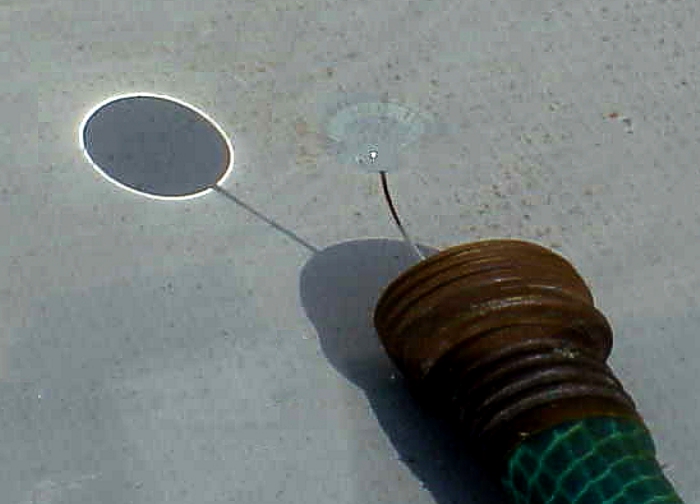 Question: I had to drain our pool the other day, and when the water level got low a mini-tornado formed in the water. At least that’s what it looked like. There was also a strange ring of light that appeared on the bottom of the pool, almost like a halo. What the heck was going on there? — JR, San Diego, CA

Answer: What you saw in the water is called a vortex, and it forms when water spirals down into the drain. The air in a tornado is spiraling upward, but a lot of the physics is related. All tornados are vortices, but not all vortices are tornados. A vortex in water is commonly called a whirlpool.

The photo shows a vortex that formed while I was siphoning rainwater out of my spa cover through a garden hose. It demonstrates both effects you reported, and more. That photo’s been sitting in my “interesting optical phenomena” folder for ages, waiting for a purpose. It’s perfect for your question.

Any body of water, from a sink to a lake, has some amount of rotation from outside perturbations — wind,  passing boats, intentional stirring, immersion of solid objects, etc. The rotation might not be visible, but it’s there. As water is drawn inward toward the drainage outlet, the radius of rotation decreases, and the speed of rotation increases. This is a consequence of the law of conservation of angular momentum.

At some rotation speed, centrifugal forces will exceed the cohesive forces responsible for water’s surface tension. When that happens, starting at the surface and progressing downward, the water is flung outward creating a depression that fills with air. Vortex formation is a common phenomenon in fluids.

The “halo” of light you described is also seen in my photo. But what happens optically depends on where the Sun is located in the sky — if the Sun is visible at all. There’s several interesting optical effects going on in my photo, but before we get to that, a review of the law of refraction might help.

When a ray of light passes from one medium (air) into another medium (water) it will change direction by an amount determined by the index of refraction (n) and the angle of incidence (θi): 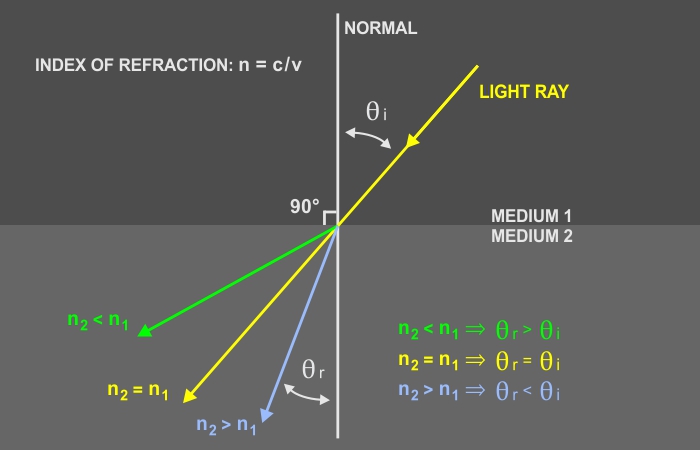 In practice, some of the light is also reflected at the interface, but only the refracted rays are shown here. Because water has a greater refractive index than air (n2 > n1) the ray refracts toward the normal. The angle of refraction can be calculated as:

From the law of refraction, it follows that parallel light rays from the Sun will converge to a focal point when passing through a convex water surface, and diverge when the surface is concave. Like this: 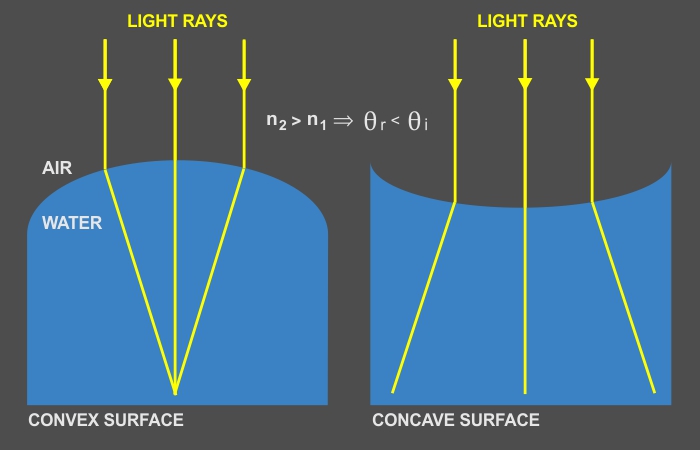 Refer again to the photo. That vortex has both convex and concave air/water interfaces. You can tell from the shadow of the hose that the Sun is over the camera’s right shoulder and reasonably high in the sky. This geometry creates several interesting optical effects:

Thanks for your question JR. Next time you’re draining your pool on a sunny day, look for all these effects. You might even discover something new. Send a photo if you do.

Next Week in Sky Lights ⇒ Seiches on Lakes