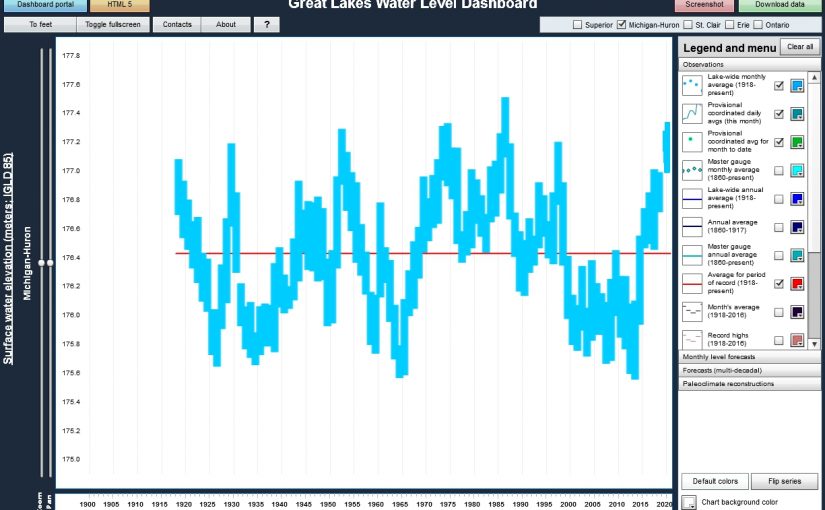 In my last post we developed a hydrologic model of Lake Michigan-Huron, then used it to seek an explanation for the lake’s currently high stage. Calculations suggested it was close to equilibrium, but two important factors lacked real data — groundwater flow and industrial use. What data I found was culled from NOAA and regional records that go back to the early 1900s. The numbers I used are averages over that time period.

The model didn’t (at first) convincingly explain the lake’s high stage. But then I uncovered more detailed data at the Army Corps of Engineers Detroit District website. Their 70 years of hydrologic data for the lake is presented in the slideshow. As it turns out, the last 10 years have diverged significantly from long-term averages in PRECIPITATION, RUNOFF, and EVAPORATION.

Lake Superior is also “running high” for the same reason, and has been releasing more than the 95,000 CFS used in my calculations. In 2018 they averaged 100,000 CFS, and increased releases are expected to continue.

I knew the Great Lakes watershed was getting more rain of late. Flooding in the Midwest has been in the news for several years in a row. Here’s an informative graphic showing flood insurance claims filed between 2010 and 2018. The Midwest, as well as the Gulf and East Coasts, took most of the hits. 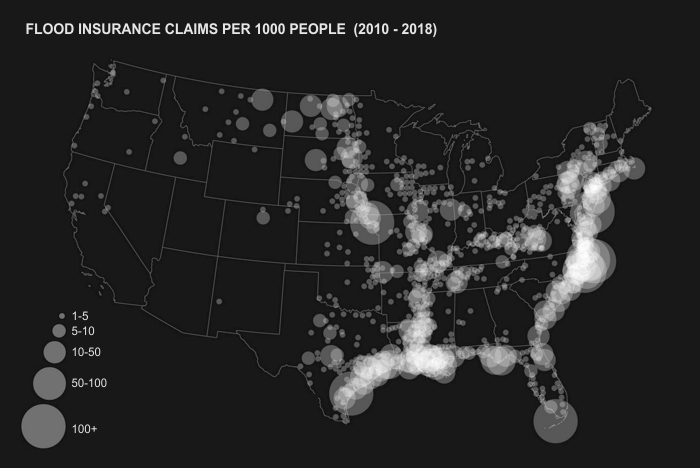 Many of those coastal hits were a result of hurricanes and sea level rise. In the Midwest there must be other factors involved. My July 1, 2019 post explained how variations in the jet stream were contributing to a wetter Midwest. And an increase in PRECIPITATION also increases INFLOW from the watershed. Further, the resulting increase in humidity reduces EVAPORATION losses. Considering all those contributing factors, the current high stage of Lake Michigan-Huron was no longer a puzzle. End of story. Or so I thought.

A few days later I discovered this NOAA chart of Lake Michigan-Huron stages vs. time (click to enlarge). The historical record shows the stage varies in a roughly periodic fashion, with each “high-low-high” cycle spanning (on average) 13 years. You can see Lake Michigan-Huron is now approaching a high point on that cycle. No surprises there given the lake’s high stage. But what could be driving that 13 year cycle? 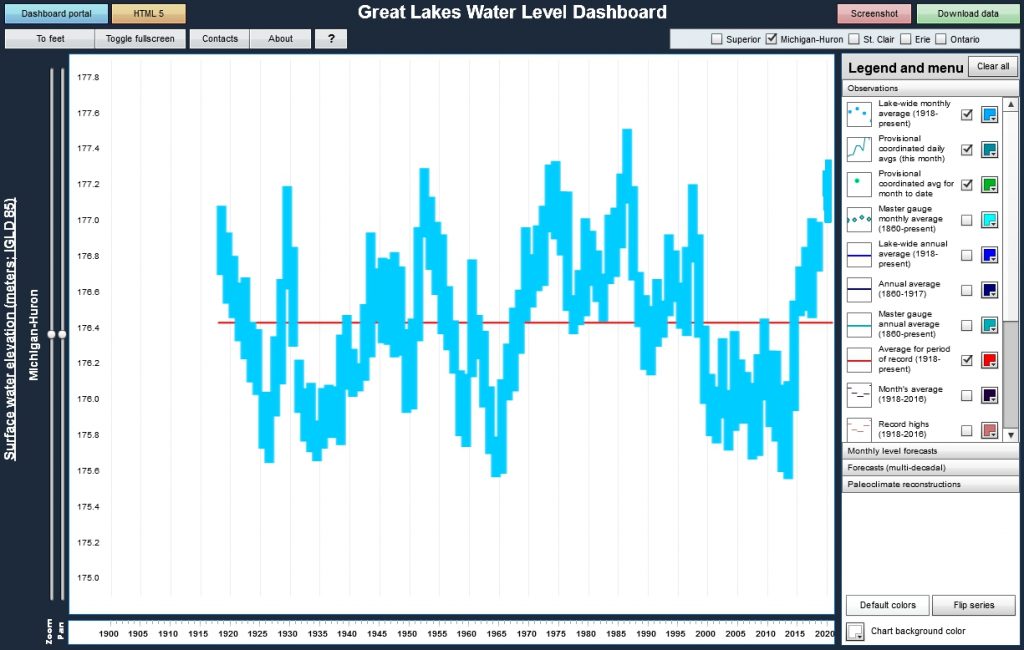 Great Lakes stages have been measured continuously since the region was first settled in the early 19th century, and this 13-year cycle had been noticed. I’d never heard of it, even though I lived in Wisconsin for many years. There were a few speculations about what caused the cycle but none were very convincing.

So I brought up the question to friend and colleague Ted Rulseh. He’s written books about lakes, and I hoped he might provide some insights. Ted has a cabin on Birch Lake, near the town of Minocqua in northern Wisconsin. He writes a weekly newspaper column titled The Lake Where You Live for the Lakeland Times. Surprisingly, he’d recently done an article about changing stages in the Great Lakes.

He had interviewed Carl Watras, Ph.D., a researcher at the University of Wisconsin Center for Limnology’s Trout Lake Research Station. Watras has been studying lake stage cycles in the Midwest since 2012. His research provides answers to my questions — or at least some compelling preliminary conclusions.

Ted’s article was based on what he learned from Watras. The Lake Where You Live is online but behind a paywall. I was granted permission to use what content I needed. Thank you sir. Here’s my summary of the science:

That North Pacific temperature cycle is similar to the El Niño operating at lower Pacific latitudes. Drought and heavy rain events in the Southwest (where I live), closely follow El Niño’s average 5-year cycle. The 13-year cycle identified by Watras doesn’t yet have an official name. He says it’s just referred to as a circumglobal teleconnection (CGT). Why that cycle is 13 years, and El Nino’s is 5 years, is not known. The most likely explanation involves interactions between ocean currents and prevailing winds.

The CGT is not to be confused with the oscillating jet stream I spoke of in my July 1, 2019 post. The two are separate phenomena, but they must interact when they overlap geographically. My guess is that, with more humid air being drawn from the Gulf, as well as the Mid-Atlantic, the Great Lakes Basin will see increasingly wetter times. The 13-year CGT (if it persists) would show an upward sloping trend.

What should we expect in the long term? Will the amplitude of the CGT increase, decrease, or remain constant? Will its periodicity change? Or will it get “stuck” in a specific state? How does climate change factor in? We don’t yet know. As they say, more study is needed.

Next Week in Sky Lights ⇒ Refraction of Light in a Vortex