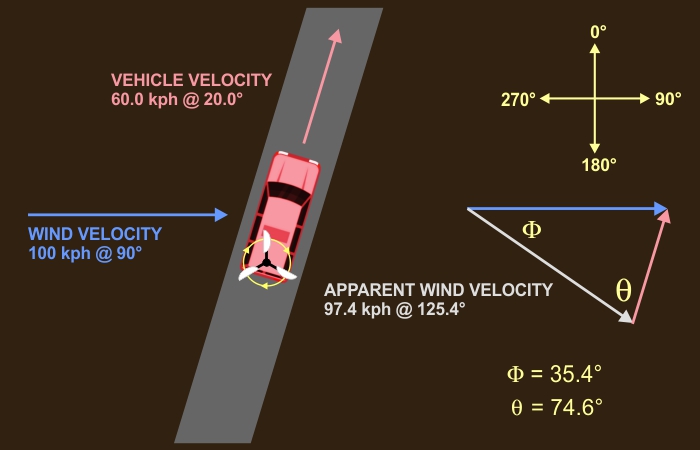 Question: I was watching a storm chaser show and saw they had a small windmill on top their van. It was spinning pretty fast, but I don’t get what they’re measuring. I mean, the speed of their van would change the speed the blades spin, regardless of where the wind is coming from. — NL, Omaha, NE

Answer: Onboard computers and GPS allow them to do some amazing real-time math. There is a vector relationship connecting true wind velocity (relative to the ground), vehicle velocity, and the apparent wind velocity measured by the anemometer (what you called a “windmill”). Are you ready for little vector math?

Vectors have direction as well as magnitude (amount). This is the difference between velocity (a vector) and speed (a scalar). The vehicle speed in the graphic is 60 kph. The vehicle velocity is 60 kph @ 20°. There are other ways to write vectors, all of which involve magnitude and direction, but this method is easiest to follow.

Note that on a calm day, the apparent wind velocity (what you’d feel if you held your hand out a window of the moving vehicle) would be directly opposite the vehicle velocity. By using the vehicle velocity vector in the calculation, we can compute the true wind velocity by vector addition instead of the less intuitive vector subtraction. The geometric version of this vector addition is shown above as a triangle of red, white, and blue vectors.

The graphic shows a “cup type” anemometer (exaggerated in size for clarity) but the vector calculation would be the same for a “propeller type” device. Note that propellers need to be swivel-mounted with a vane that keeps them pointed directly into the apparent wind. Cup types are omnidirectional, so they use a separate vane system to measure wind direction.

Now we’re ready to do the numeric version of vector addition. For the example in the graphic we’re using a compass rose that runs clockwise from 0° to 360°. The orientation of the coordinate system is really arbitrary. What’s important are the angles between the vectors. For example, angle θ = 180° − (125.4° − 20°) =74.6°. If you didn’t follow that, think parallel lines cut by a transversal.

If vectors A and B make an angle θ (theta) with each other when placed head to tail, and we add them to each other to form a resultant, the |magnitude| of that resultant will be:

and the angle Φ (phi) the resultant makes with vector A is:

The numbers in the main graphic are all calculated values. If you want some practice with your scientific calculator, you might want to try running those numbers yourself. Note that when you obtain a value for Φ you’ll need to subtract it from the direction of vector A to get the true wind direction. Your answer might differ slightly from 100 kph @ 90° depending on how you round off.

Of course, all these calculations are done on the fly in real-time, providing output to a display that (among other things) shows the values for all three vectors. On professional storm chasing vehicles, GPS (which can be dropped in storms) is backed up by onboard inertial sensors and accelerometers. And the old-fashioned propeller and cup anemometers are being supplanted by new technology that uses Doppler-shifted ultrasound to measure wind velocity with no moving parts. Check out this nifty model.

You don’t need a weatherman to know which way the wind blows.

Next Week in Sky Lights ⇒ Climate 100 years From Now

Q&A: How the Stars Got Their Names
Climate 100 Years From Now
HOME